Some sadness, but good news nonetheless:

Those of you that know me remember the exploits encountered in slowly resurrecting my daily driven 1980 XS-1100SG Midnight Special, “Well Oiled Machine” from her previous owner’s incompetence and severe neglect.

Those exploits include many thousands of miles, a “Revolutionary In-flight Oil Change Method” (NOT highly recommended), a taste test of hot Castroil 10w-40, and a massive oil spill covering most of South Texas (2 incidents, and I have plausible deniability if the EPA comes calling). All these shenanigans can be found at Other Interests

After two years of hard riding and lots of wrenching “Well Oiled Machine” was back to her original glory. New polyurethene black paint and new crome were the finishing touches. 160 MPH speedo, a sport fairing, Chris Rawson’s stainless brake lines, a Tkat fork brace, and her rider all gave her an attitude. She really sticks out in a crowd. It is not really necessary to actually drive on the front wheel if you do not want to (wheelies . . . woohoo!).

For those that do not know, “Bug” is a Tkat (person) originated unit of measurement. It is defined as the speed where bugs start to stick/splat to you instead of bouncing off. “Bug” is generally accepted to be 50 miles-per-hour.

Folks may also remember that I bought “The Dragon” in December or so of last year. “The Dragon” is a 2001 Honda 1520 F6 Valkyrie. This is the first new bike I have ever owned. I’ve paid my dues, and cannot believe that I waited so long. 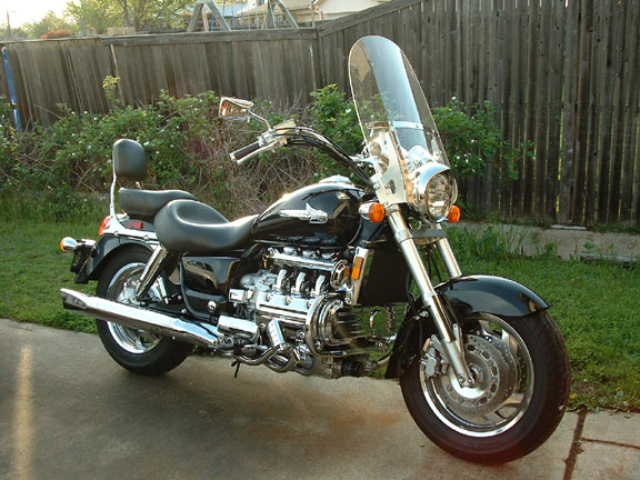 Well, bikes all have personalities and soul, and the one thing they require above all else is that they be ridden, hard and frequently. They are in Purgatory if they are not. That’s no way for a machine to exist.

On the rare occasions when I am not actually riding, “Well Oiled Machine” and “The Dragon” sat in the garage and growled at each other. When it came time to ride (and that is very often for me) both machines vied for my attention with sometimes blatent plays on my emotions. Whatever the choice, I somehow felt that I had let the other machine down.

Leaving a machine weeping in the dark garage on a sunny day or a balmy night can be heart wrenching.

I happened to mention my delimma to a friend that I work with . . . he had been aware of my history with this bike, and he was interested in taking “Well Oiled Machine” for a spin. I was surprised, I was unaware he was a rider (usually I can spot a rider immediately–in whatever guise). But it turns out he is and it was obviously a good match.

Today he cut me a check. “Well Oiled Machine” is his. Letting him ride THAT bike, with its power, agility, looks, and attitude–in THIS weather (70’s at night, 80’s during the day)–it was probably a foregone conclusion. The time has come to pass the torch.

The XS owners’ group is a fine bunch of people, and it is great to see folks from different backgrounds and areas pull together over a common passion. I’ll be around the list a while yet . . . and my friend has already discovered the resources of the XS11 group . . . he may show up on the list too. Make him as at home as you have made me. He has a bike worthy of this group.