I went for a really long ride yesterday. I am not really sure I understand this need, this compulsion to voyage . . . as I once phrased it . . . “This devastating need to see . . .”

Even if I should come to understand it . . . I have no intention of excising it. That would be kin to cutting out a healthy portion of my soul.

I commute on my bike daily, but I really yearn for the open roads. I have been known to make trips several thousand miles long, and take at least one long trip yearly.

There is something very primal in riding . . . a solid, tangible connection between man, road, and machine. Definitely spiritual, probably a bit sexual, maybe wrapped up in the very forces of life itself. Then again, maybe it is just me. When riding, I am having fun, but that is not why I am there. When I am riding . . . more so than at any other time . . . well . . . I just AM.

With time away from the road, those connections do not weaken, they become stronger, pull harder. They are eventually impossible to resist.

I had worked on the boat in the morning. Eventually, as happens in the Texas summer, the heat forced me to quit.

Headed home and cleaned up. The evening was shaping up to be a nice one, as the promised cool front was hanging around overhead, finally bringing a little cooler and drier air.

Said, “Heck with it” and hopped on “The Dragon”. Man! I love to ride that beast. And she is really built for it . . . huge, 775 pounds dry, well over half a ton with me and fuel, and the longest wheelbase of any cruiser other then the ‘wing. Yet she is amazingly nimble and maneuverable . . . out classing many. The power and torque throughout her entire gear and RPM range are nothing short of amazing. When you twist the throttle on this monster, you really have to hang on. My size and strength are a complement to her, and together we are a single being. I become “The Dragon”.

Course I may be just a bit biased.

I headed north out of Dallas, hit Sherman 70 miles or so later, then headed back south on Tx 5, intending to head for home. Nearly at McKinney, I changed my mind and headed northeast on US121 and ran to Bonham. I wandered around town a bit, looking closely at a 130+ year old house that my mother once owned (restoration project).

Not much in Bonham anymore, they seem to have even lost the local Walmart.

Then it was east to Paris. Stopped at a KFC, ate some chicken, and flirted with the cute KFC gal. Yum. The chicken was ok too. Stopped to take a picture of a dragon (not mine, and not a MC). Nice town, but oddly laid out. 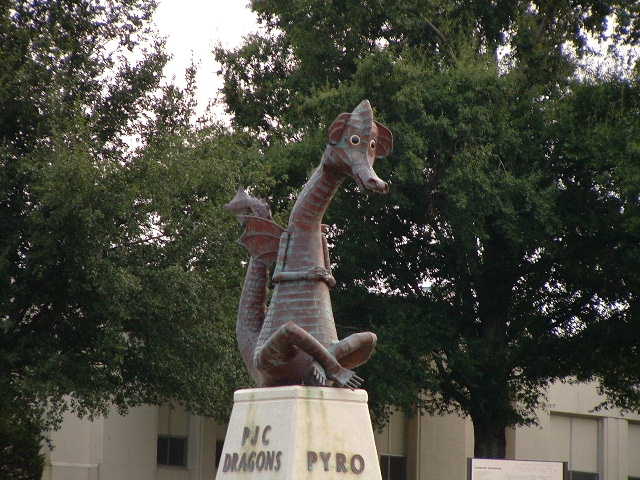 Left town and headed south for Commerce, where while stopped at a convenience store for a Coke, I got a new gun. Commerce is a college town, and as such, has more than its fair share of drunk college kids.

One of those made three BIG mistakes.

Mistake #1—Pulling a gun on a Texan, especially one who is minding his own business. I think they just thought they were going to give a little scare to the biker type dude (me).

Mistake #2—Not immediately firing it after pulling a gun on a Texan.

Me: “Nice gun . . .thanks! You should have those broken fingers looked at pretty soon, or you will lose the use of your hand. And I think your nose is probably broken. Sorry about the busted windshield, if you had rolled when you landed, it probably would have held up ok.”

He then barfed all over his car. Went well with the blood from his nose.

His friend was apologetic and promised to get him home and keep him out of trouble.

The gun was a Llama 45 auto . . . it had not been cleaned or fired recently. Yuck. As a Texan I should be offended that he did not pull a better gun on me. I know from personal experience that it is a complete POS. No accuracy, and no power to speak of, despite the hot load he had in it. I have given better guns away. Besides, I have enough 45 autos (good ones). I took it apart, and scattered pieces along the rest of my journey.

Drunks, cars, and guns. Sheesh, what a mix. Morons.

I think his car keys are in Lake Ray Hubbard.

The moral of that is twofold: 1)If you are going to draw on a Texan, you damn well better shoot, and 2)If you are looking for trouble, and you see a 6 foot, 300-pound biker type dude standing there minding his own business–you probably ought to pick someone else.

Avoided another drunk in a red pickup on 635 in Dallas, he seemed determined to run SOMEONE off the road.

Total of about 350 miles. Overall a really good evening. I am still smiling.