Well, so far we are not having a good year. Just a few weeks ago I lost my truck to a red-light runner in downtown Dallas. Totaled the truck and I had some minor injuries. See Crunch! for that story.

Well I got the call you never want to get at work yesterday evening. Had to work a bit late.

I stared intently at the phone when it rang.

I knew instinctively that I did not want this call. Turns out my instincts are right on, as usual.

It is after my normal hours and very few people know I am here. Either it is bad news from inside the building, like a major system crash, or it is bad news from elsewhere. It is an outside call, and a number I do not recognize, but that means little. All our guys carry cell phones, and I don’t remember my own phone number half the time, much less everybody else’s.

Turns out my wife has been in an auto accident.

Time slows to a crawl. My body goes numb. The room and activity around me fade away. Half a hundred possibilities flow through my mind, all of them equally terrifying . . . I cannot lose Her.

But there are a few things I fear. A very few, and even my own death is not one of them . . . but if something was to happen to Her . . . here was my fear and my pain, all wrapped up in one package.

My heart rate and breathing remain relatively normal. I have always had excellent control over those. Comes from long years on a bike, stints volunteering in the ER, pilot training (I am a Cessna pilot when I can afford it), and many incidents that I have had to stop and help with. This allows me to remain effective even when everything around me is going to hell.

So I am calmly able to talk on the phone. I can hear the plastic handset of my telephone making kind-of stressed out crunching noises though.

Suddenly the reactionary brain shuts off, and the analytical brain, combined with my intuition and my tap into the magic of the world start working.

My awareness reaches out. Time has stopped. Somehow I know it is not that serious. I am at least 30 miles away, but somehow I know. There are connections in this world that are not always easy to explain.

She is OK. Bruises on her neck from the seatbelt, and her right breast will probably bruise from the seatbelt too. Shaken up yes, but when she started crying cause her beautiful new car was crunched I knew for sure she was going to be fine. Turning left, she got whacked by sneaky little Chevy. Hmmm . . . same kind of car that got me. Conspiracy? Gonna have to keep an eye on those things. They might be plotting something . . .

The other driver is unhurt too, so life is good.

I am already telling everybody that the bruise on her neck is just a hickey that I did a really bad job on . . .

Caught her on the passenger side, right on the front wheel. Her car is a brand new Altima . . . we just got it last November. This car has airbags everywhere. Front, back, curtain, and both sides, as well as in the headrests of the seats. 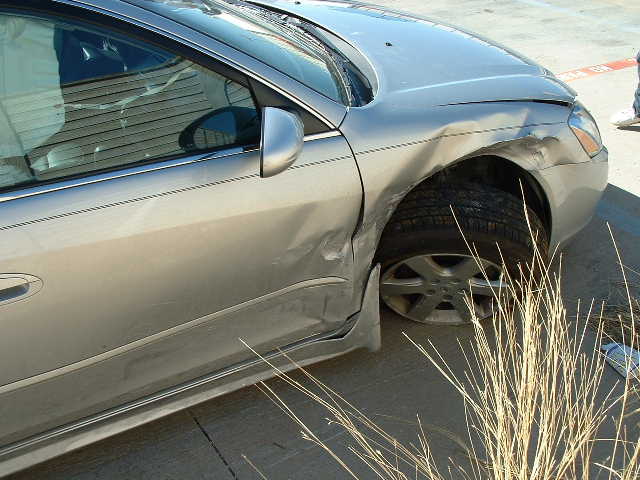 The wife's Altima gets smushed. The passenger side. 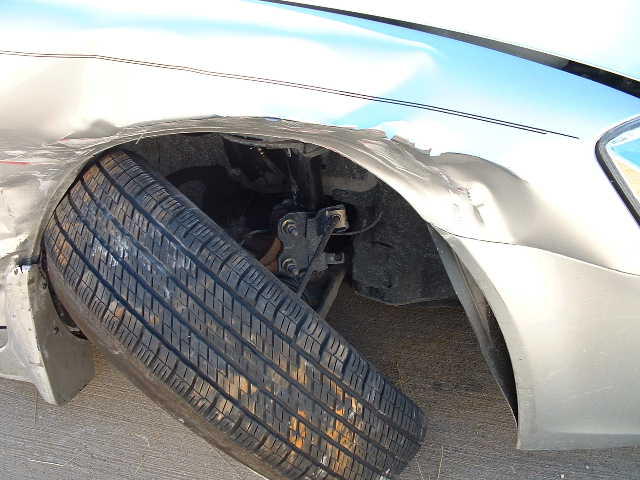 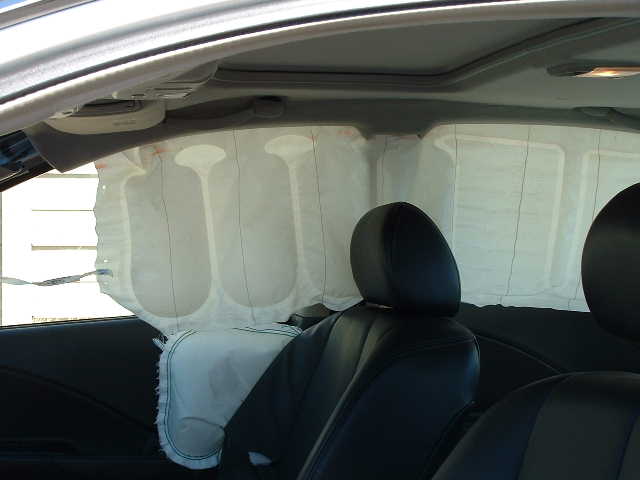 The curtain airbag on the passenger side deployed, but the rest did not. Not needed. They are getting pretty good at this stuff. Had there been a passenger, their head would have been protected from hitting the window. Pretty cool, and did not waste the other $2000 worth of them that are in the car.

It was able to be driven out of the street, but has a broken wheel and significant mechanical damage, as well as a squished fender and door. 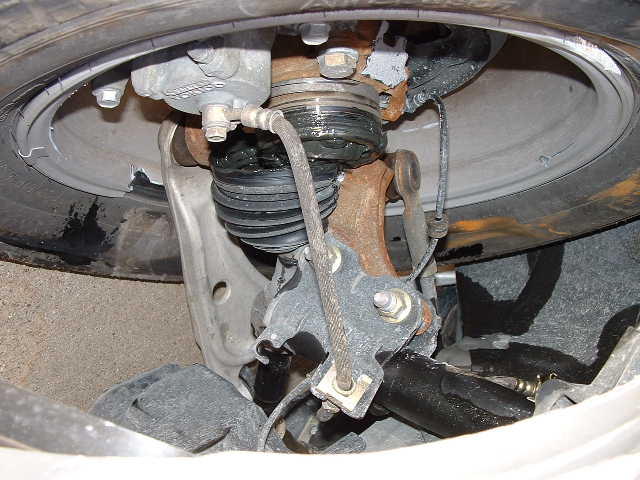 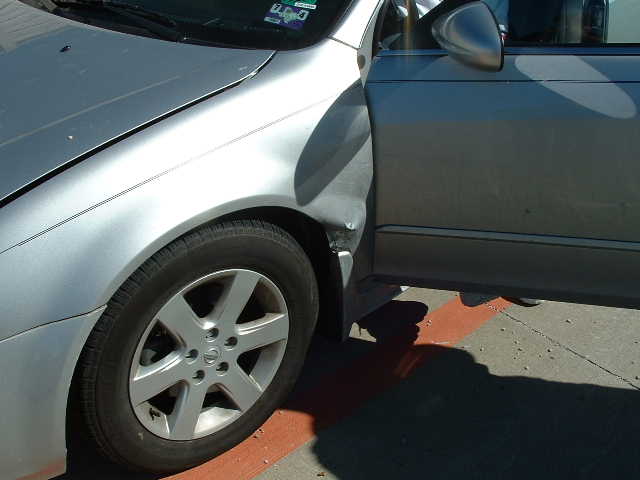 We are not sure where this damage on the driver's fender came from. She does not remember it from the accident, but it is obviously a hard hit there too.

Had it towed to the Nissan place. Body shop guy says $5000-$8000 in damage, but easily fixable. Probably be about three weeks.

She is really upset about the car . . . this was her first brand-new one, and it is a really nice ride.

She keeps apologizing to me about the car (I bought it). Hope she understands, as much as I like cars, trucks, and bikes . . . really . . . I could give a sh!t about the car, as long as she is OK. That is why we have insurance, and even if we did not, money is something I can replace, she is not.

Sad thing is, in something like 12 years we have not so much as had a door ding in any of our cars (despite driving a LOT and being in Dallas where everyone is nuts on the road), and now we have totaled one (my truck) and smushed another within 5 weeks. Sucks.

Sigh. And Monday, I’ll have to order a new handset for my phone. My boss is going to love that!