More Complicated than it has to Be

Saturday was the day. My brother Patrick had married his sweetheart in a private ceremony and they were holding their wedding reception out at the farm.

One characteristic of the members of this family is that they are all intensely individual…usually to an astonishing degree. Patrick is no exception. Quiet, imaginative, and determined, he had set himself a task; build a pavilion at the farm to host the reception under. Earlier I had helped him transport a couple tons of lumber out to the build site, so it was obvious to me that this was not going to be a lightweight structure. A lot of work was forthcoming.

I am not at all privy to the thinking, dreams, hopes, or motivations that precipitated this project. I don’t have to be. He is my brother. Though we are very different, and often out of touch (I commonly refer to him as my “mythical” brother) it is a very short leap for me to see myself doing the same type of thing.

But we are cast from basically the same iron.

When Saturday arrived, I was asked to come early, and bring some more lumber. Patrick needed the wood and some help to build tables and benches for the reception. Cool! He asks, he gets. I arrived to get my first look at the structure. Although having seen the load of lumber I had some idea what he was up to, I was still very impressed with the outcome.

Seems he had the “look” of the structure in mind, not just the utility. Massive beams and trusses hold a plywood decked tin roof overhead. Even the crossbeams between the trusses had been placed with aesthetics in mind. The structure has a sense of quiet purpose. It is not beautiful in the traditional sense of the word, but rather exudes strength…beautiful in the sense of a strongly muscled arm, it just looks right. 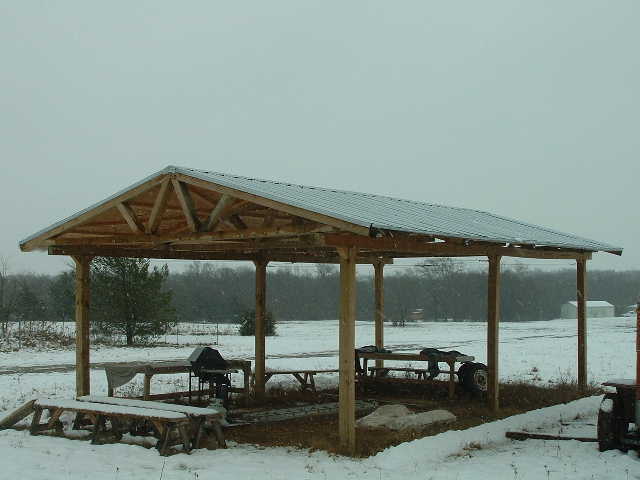 My brother's pavillion. More complicated than it has to be.

As the guests arrived we were finishing up shooting the last of the nails to make the benches. The band was setting up. The food was arriving. Gorgeous weather was going to favor them, though the promise of late thunderstorms was on the air.

That was when one of the guests looked at the pavilion and quietly made the comment, “More complicated than it has to be.”

I found myself reflecting on that statement for quite some time. Was it true? Certainly. Is that a bad thing? Not at all. Anything worth achieving in human endeavors shares the same characteristic. Everything we do is more complicated than it has to be. Simple utility is something we revert to only when stretched thin, when our imagination is not allowed to roam. The ability to dream, and more importantly, the ability to convert those dreams into reality, is what makes us human. It is what makes life worth pursuing.

That is the difference in simply being alive, and in living. Truly living is more complicated than it has to be.

Upon more reflection I decided that the statement described my brother pretty well.

More complicated than it has to be.

Yes. And that makes me proud.

So here’s to my brother…More complicated than he has to be.