Note: I’ll make this easy on everybody and call this one fiction…

It was a rude awakening.

The wife let out a blood-curdling yell as something alive smashed through our bedroom window and tumbled over us in the bed. Her scream combined with the smashing glass jerked me out of a deep sound sleep instantly and completely. I grabbed the wriggling body and threw it with all my might as I shoved the wife off the left side of the bed. As the intruder (and half the sheets and a pillow or two) crashed into the dresser across the room I rolled off the right side of the bed and onto my knees.

At that instant Casper, our 22-pound Maine-coon cat, let out a hell of a wail and careened into the room at an incredible rate of speed. Best as I can tell he smashed into me (used me to change direction), ran UP and across the wall, and landed smack on top of my wife knocking her back to the floor, facing the intruder and growling protectively. I am amazed at the impact he had on me, and thankful that he had no claws out when he did it. I would not want to be his enemy…five of his six ends are pointy! I had never heard him make a noise quite like that, but I now pity anybody that ever attacks my wife with him anywhere nearby.

The adrenalin had kicked in full force now. I still had not gotten a look at the interloper, as the room was nearly pitch dark, but as the intruder screamed with rage I grabbed for my attitude adjusters—two matched Colt 45 1911 A-1 Automatics. These are heavily customized, equipped with laser sights, always loaded, and fit me perfectly. I can fire two handed as fast as the actions will work, and put all the rounds from both guns inside a 10-inch circle at 30 feet. I have had a lot of practice. The gun in the right hand is held vertical, the gun in the left hand held horizontal so the ejected shells do not hit me in the face.

“Stay down!” I yelled at Carey as I sensed she was trying to get up again. The intruder screamed again, an absolutely chilling expression of rage and anger, and I spun on one knee to face the noise, lightly touching the triggers and activating the laser sights. I had already acquired a target—both paints solidly on something obviously alive, but the laser points looked very strange, reflecting oddly.

I have always prided myself on maintaining my composure when under duress, or at least keeping enough control to be effective and not do something stupid but this situation was way outside my usual experience. I was quite ready to shoot whomever had invaded my home, but the circumstances were not clearly defined yet. With tremendous effort I held my fire.

“Freeze or die!” I yelled. I got a muffled grunting reply, and the noise and movement lessened.

“Carey, grab the light but stay down!”

I was beginning to have difficulty seeing the target in the dark room. I was afraid to blink as I might lose sight of it, but I had a wet warmness running down my forehead and into my eyes. I was pretty sure it was not sweat—I tasted blood—but could not imagine how I had been injured. Possibly the intruder had a knife. I narrowed my eyes, applied a little more pressure to the triggers, and with grim determination and some difficulty I kept the somewhat liquid looking movement square in my sights.

Carey finally made it to her bedside table, reached up, and turned on the lamp.

In the light all was revealed with crystal clarity. Clearly I had the upper hand and did not need to shoot, but I was so startled by what I faced that I nearly fired anyway. I had the intruder perfectly in my sights . . . one laser spot in each eye to be precise. Now somewhat quiet, he stared back.

The room was a frightening mess. There was blood splattered across the bed and halfway up the wall completely on the other side of the room. There was glass from the double pane windows everywhere. Carey was laying on the floor, with Casper perched on her back and growling at the intruder. His tail, raccoon-like and normally already spectacular, was completely fluffed out. He looked much bigger than his already impressive proportions (this cat is over a yard long when stretched out).

I let out the breath I had been unaware I was holding. Now that I had seen the intruder, the threat level had clearly receded, so I flipped up the thumb safety on the big Colt in my right hand and set it on the floor. I then used my newly free hand to wipe my face. It came away soaked in blood. I noticed several small but freely bleeding cuts on my left arm and leg. The flying glass had done its work. I assumed the blood on my face was from a similar cut on my head.

The intruder had calmed down, but was staring at me balefully and was still bristling. He was also standing on one foot ON my dresser. My intruder was no thief, he was absolutely the largest great barn owl I have ever laid eyes on. His (or her) other foot was held up and holding a thoroughly dead pigeon (the source of the blood all over the room) the owl had obviously snatched out of the air just before smashing through our window. I detachedly noticed that the air in the room was full of floating small feathers and down. The owl was at least 24 inches tall, and as he had his wings fully extended it was easy to estimate his wingspan. It was longer than my dresser, making the wingspan about four feet. The undersides of his wings and his belly were a clean gray-white. In this stance he was very impressive.

His head was closely following every movement of the remaining Colt in my hand, moving in concert with minor movements of my arm and clearly watching the laser sight. As an experiment I moved the gun in a small circle. His head moved precisely to follow it. I took my finger off the trigger, deactivating the laser sight and expecting him to lose interest, but he remained focused on the gun.

Carefully I snapped up the safety and set the gun on the floor next to the other one. Immediately the atmosphere in the room got much friendlier as the owl settled back and folded his wings. Casper stopped growling and stepped off Carey, moving closer to the owl. About in the middle of the room he stopped and sat, his fur settling and wrapping his tail around his front paws in that certain dignified manner cats are known for. Surprising events were not yet through however.

I knelt there stunned as the owl and the cat had a short conversation. Various yips, screeches, and growls were quietly exchanged. The owl then fidgeted and looked back at me, and Casper looked at me as well. The message was crystal clear as I was between the bed and the window. They were plainly telling me, “Get the hell out of the way!”

I moved back a bit, and the owl opened and swept his wings once, folding them again exactly as he soared through the window. With scarce a sound, he was gone, the floating pigeon feathers swirling rapidly from the vortex created by his passage.

The next morning I most carefully did not explain to the carpet cleaners or the glass man what had happened, letting them draw their own conclusions as they cleaned up and I repainted the obviously blood-stained wall. I was expecting a visit from the police after that, but they never showed. Guess the workmen figured they would keep quiet. Heh heh. I got really good service!

I saw our visitor a couple times after that, and I know he saw me. I think we have an uneasy truce. He doesn’t crash into my windows…and I don’t draw guns on him. 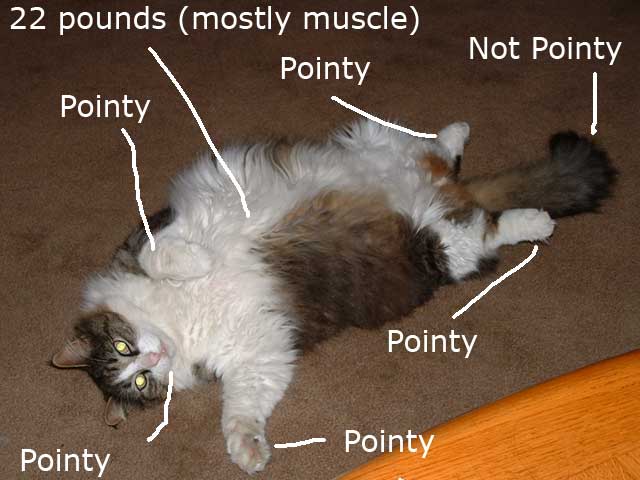 Casper, the 22-pound Maine Coon. Five of his six ends are pointy!