Even Dragons Need Their Moms

A short time ago my mother got horse trompled (technical term) and needed knee surgery. Screws, plates, and a month off were expected, but tolerable.

A few days after her surgery a “false” aneurysm developed in her leg and she went back to have that corrected. Little bit more major, as it now involved an artery graft, but still relatively minor.

When they opened her up, the aneurysm burst and they had uncontrolled arterial bleeding. It turned out to be due to a screw they had put into the knee area that was nicking the artery. Now we are into major! She needed 6 units of blood before it was all over. The doctors spent the next several hours just saving her life, then several more saving her leg. At one point it looked like that would not be possible, and since Mom was out of it, I had to sign permission forms to amputate her leg above the knee.

She was under anesthesia for over 14 hours, and on the breathing machine for two full days afterwards.

Fortunately amputation was not necessary (barely), and after nearly three weeks in the hospital, including several days in intensive care, Mom is recovering at home.

Thanks to those that offered prayers and comfort. It helps more than you can know.

I wrote this piece after the night of her grueling surgery…shortly after they kicked me out of the hospital for the short remainder of the night. There was nothing more I could do there, so seeking some relief in riding, I took the long way home.

I am not entirely happy with this…but find at the moment that I cannot tap the emotional depth needed to work on it further…so here it is, raw and unedited….

Even Dragons Need Their Moms

The Dragon is alive, but wounded
The machine and I are not quite one
Nobody can heal me… and that’s as it should be…
Some things just should not be healed

A loved one is down, gravely injured. Crisis! Complications!
Agonizing decisions are there to be made
Nobody can help me… and that’s as it should be…
Some things just should not be decided

She was awake for a moment
I tried to speak, to tell her what was happening
She could not hear me…and that’s as it should be…
Some things just should not be told

Surgery a success, stabilized for a moment
The doctors danced a jig; 14 hours went better than expected
Not forced to do all they feared… and that’s as it should be…
Some things just should not be done

“Out!” they cry, “You can do no more good here”
So down the highway I roar, flying for relief
I had seen so much…and that’s not as it should be…
Some things just should not be seen

Eying the past, probing the future
Influencing both with nothing more than sheer will
Hoping against hope… and that’s as it should be…
Some things just should not be accepted

You see, even Dragons need their Moms…

And that is as it should be… 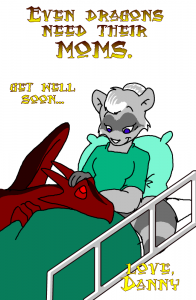 Even Dragons need their Moms. Click for larger view.

The art is a by cartoonist and illustrator Ralph E. Hayes Jr. He is the author of several popular on-line comics, including Goblin Hollow, Nip and Tuck, and Tales of the Questor. I highly recommend that you check them out.