Burning miles. The Valkyrie is a great bike for this. Effortlessly powerful, carrying myself and full gear with out so much as a protest, at whatever speed I should desire.

Blasting down I-90 at close to 85-mph. Feet on the highway pegs, hands in my lap as the cruise control maintained the speed and the superior stability of the big machine maintained her direction. She only needed minor corrections from me…just a lean here and there, or maybe a knee extended into the slipstream. I had not touched the handlebars in 60 miles. She had her head…she knew west.

The wind, sun, and the freedom; I was reveling in my element.

Unexpectedly the engine changed tone. Relaxed but alert, I instantly noticed. The Dragon was demanding attention.

I’ve a long habit of talking to my machines. “You can’t be out of gas!” I knew instinctively how far I had come. I scanned the dash anyway. Yep, only 80 miles on the trip odometer. She should go at least 100 miles at these speeds.

Step three is to lose power. I was still mentally adding up the miles and remembering how much fuel she took at the last stop. She began step three. Step four is to die.

“Okay! Okay! I believe you! Sheesh! Just what the hell are you up too?” I reached down inside my left thigh and flipped the tank to reserve. The power instantly returned and she settled back to her normal flawless performance.

Well now I had a problem. I had been expecting…needing to make about 105 miles to reach my next stop. I didn’t think there was anything closer.

Main fuel on my Valkyrie is 4.3 gallons. I had burned all of that going just over 80 miles. 20 miles to the gallon. That sucked. What the hell? Briefly I wondered if I had a fuel leak or other problem, but rapidly returned my thinking to the immediate need.

The reserve is about a gallon. At present consumption that would be gone in 20 miles, and I needed to make at least 25. Crud. Five miles is a long way to push a Valkyrie. I glanced at the map on the top of my tank bag to see if anything closer was available. Nope. That was that. You’ve really gotta watch your fuel out here.

I kicked her off cruise and let her coast down to 50 mph. I reset her at that speed and just puttered along. It is annoying to go that slow out here, but that should add considerably to whatever range she had left. I just hoped it was enough.

It was, barely. She was running lean when I turned into the station. The pump said “5.3 gallons”.

Post note:
There was nothing wrong with the bike, and even under the conditions (load, speed, heat) mileage should not have dropped that far. The “10% ethanol” stickers on all the pumps in South Dakota gave me my first clue.

Simply put, the gas in South Dakota sucks. Regardless of grade (I tried them all), the best mileage I achieved on South Dakota gas was 24mpg, with a low of 20mpg. With my load and driving (flying) habits I normally get 30mpg. As soon as I gassed up in Wyoming and later in Montana, my normal range returned.

There must be a powerful ethanol/corn lobby in South Dakota…what else would make them formulate their gas so that it takes 25% more of it to do the same job.

(And here I thought we were trying to conserve gasoline).

Watch it out here folks…running out of fuel a full 40 miles sooner than expected can really put a cramp in your day. 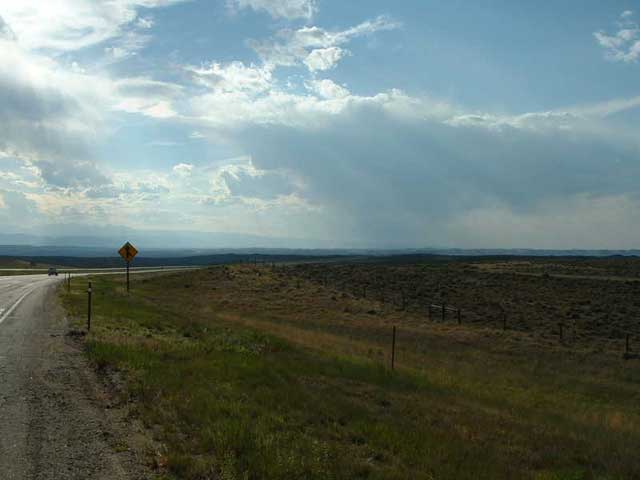 Not really the view you'd like to see after hitting reserve fuel a full 40 miles before expected...

This entry was posted in Alaska. Bookmark the permalink.