Spirits, visions, or just a bad breakfast. I know. You decide.

I flew into the Black Hills of South Dakota today. Mount Rushmore and other area attractions were on my list of things to see. Another attraction (at least to me) was the prospect of several hours of gentle canyon carving on The Dragon.

Reaching the area early to avoid the crowds I was a bit put out about the sheer size and scope of the supporting infrastructure for the monument. The parking structure and viewing plaza actually block view of the presidents from some aspects. I guess it is necessary for one of the most famous monuments in America. I guess… 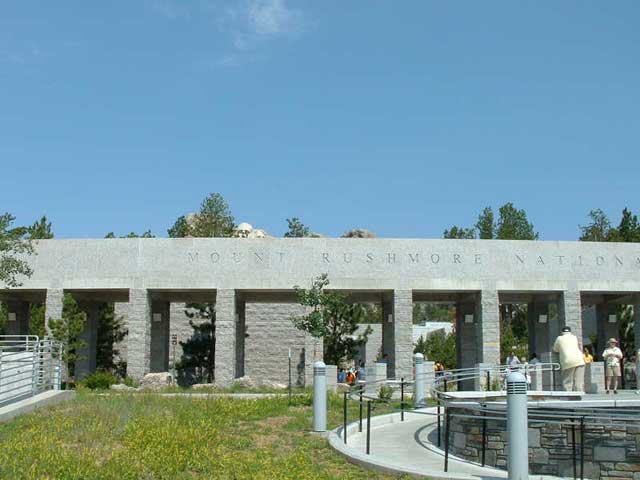 There were a large number of foreigners viewing the monument. I talked to a couple from Egypt, another from Great Britain, and took a picture of a Japanese couple with their camera in front of the monuments. We could barely communicate, they only knew some very basic English, and I knew no Japanese, but we got our messages across. I was highly encouraged by the foreign tourism, as more people (other than Americans) need to see this amazing country. It has, and can, and will, change the world.

Mount Rushmore is impressive, but my interest was also in the engineering side of things. I would love to have examined things a bit closer, but alas, distance viewing is the only option. I left vaguely unsatisfied…unable to feel the scale of the monument from such a long way away. I took pictures, but honestly, they can’t help with the scale either. There are postcards and books full of professional pictures that can outdo any efforts of mine. I’ll bet none of them has a Valkyrie in it though! 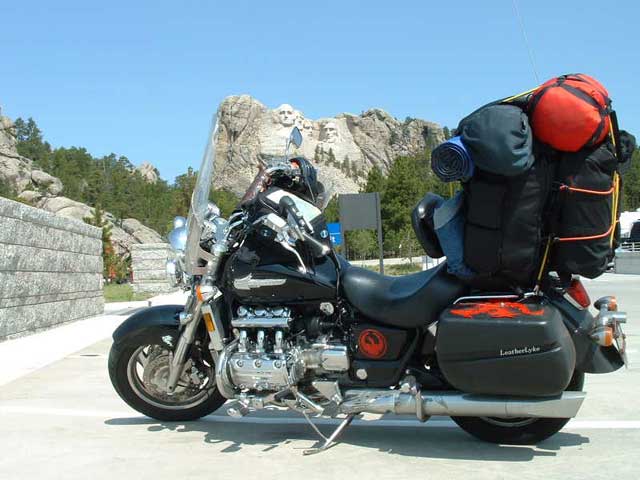 I then carved a few more canyons and visited the Crazy Horse Monument site. Another giant mountain carving, when finished it will dwarf Rushmore…not that I’ll be able to tell. Once again, the scale is just not available from a distance viewing. The neat thing about the Crazy Horse site is that it is entirely privately funded. It has been worked on since the 50’s, and the face is now complete. It appears to me that the scale of the work and the pace are picking up. Maybe it will be finished in my lifetime. 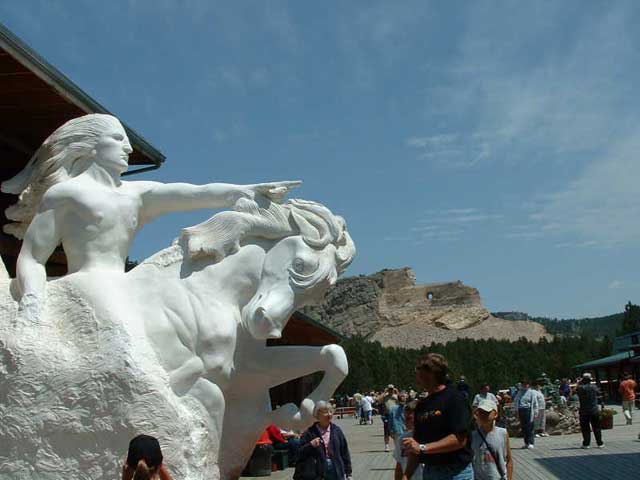 The Crazy Horse Monument (model in the foregroud, actual monument in the background)

Anything else on my list had to wait. As I left the Crazy Horse Monument, a nagging headache that had been with me all morning simply exploded into nearly debilitating pain. I don’t get headaches often, but when I do they can be bad. This was bad. I was having trouble focusing my eyes, and simply couldn’t concentrate. These are not good traits to apply to motorcycle riding.

I had planned to take a couple of Forest Service roads to shortcut some of the more touristy areas and had gotten a ways down one of those when the headache hit. Gravel and sand, the road needed my full attention and I simply couldn’t give it. I really didn’t feel I could safely continue. I looked at my map and saw nothing helpful so I idled down the road until I found a turn-off. “Authorized vehicles only” was not much of a hindrance…I just patted the Valkyrie on the tank and said, “You’re duly authorized.”

The track twisted around a bit and then made a sharp turn. Instead of following the road, I entered a small meadow just off the road and pulled behind some trees. The camper in me congratulated myself on finding the perfect campsite; although I had no idea if camping was permitted here. Frankly I didn’t care. I just needed to lay down for a bit and cover my eyes. The pain was such that I was to the point of moaning under my breath now.

I unrolled my sleeping pad on the ground next to my bike and sprayed myself with some bug repellent. Using my rolled up sleeping bag as a pillow, I lay down, covered my head with my heavy leather jacket, and simply gave up the concentration it had taken to remain functional despite the pain. I was out in seconds.

The warrior in me smelled death. Not the odor of decay, but death. Right here. Right now. Involuntarily I turned and followed the trail. There was something I was supposed to see…

I awoke in full fight or flight mode. I leapt up, throwing my jacket off me. Heart pounding, slicked in sweat, and breathing hard I actually jogged several steps away from my bike and swung my fists at unseen assailants. Bewildered, stopping, I shook my head to try to clear the visions and when that didn’t work I tried closing my eyes. That just made the terror come sharply into focus and I opened them wide again.

“Oh my god!” I gasped and continued to breathe hard as I worked to regain control over my reactions.

Too late. I fell to my knees and retched, spilling my mediocre breakfast into the grass. I shivered as I slowly regained control.

I don’t have nightmares. I have always been able to realize when I was dreaming and exert some measure of control. This spectacle was far beyond anything I have previously experienced.

I wonder if people really realize just how ugly history can actually be. There are acts of bravery, unfathomable cowardice, heroism, and inconceivable evil on both sides of every story. Few ever know the whole tale. Fewer would want to.

Gasping, finally able to see the real world, I packed my bike in record time and mounted up. Giving a final glance around the meadow, wondering if I would ever sleep again, I started the big machine and roared off the way I had come.

There are many stories to be told, many spirits begging to be heard-but this is not my task. These are not my stories, and I am not the one to tell them. Their story’s completed. Mine is just getting started. Telling theirs would require living it…learning it…and I would not survive the experience unscathed. I shuddered again.

All trace of headache gone, I gunned the big bike, sliding on gravel and carving canyons at what was no doubt an unsafe speed. I bid the Black Hills, all their history, and all their spirits a farewell. I hope they find peace.

I had been here too long. It was time to go north.

This entry was posted in Alaska. Bookmark the permalink.