So, a busy week coming up.

Yesterday I hopped in Big Iron, my faithful and somewhat ignored V-10 4×4 Dodge pick-em-up truck, to zip around the local area and run a few errands. Of course, “zipping” around our local area added up to over 200 miles, but that’s just Texas.

Errand number one was to drop by my friend Ron’s house, pet his dog, and steal his motorcycle. Seems the bike has a few mechanical maladies that need the “touch of Danny” to take care of. Personally, I think Ron and the bike have simply had a “spat” and aren’t talking . . . ur . . . make that “communicating” at the moment. Some time apart for both of them and a day at the spa for her are probably just the thing needed to put that “spark” back into their relationship. Well, that and a battery charge.

The bike, being inherently female, was not capable of just coming out and just saying, “Leave me alone for a while, you big brute!” so, again in an inherently female style, pulled a few shenanigans to “educate” him to that fact. Things like dumping oil all over his left boot. Things like a front brake that is doing its damdest to buck off the rider. Things like a back brake that barely functions at all, if you can manage to activate it via the cruelly twisted foot lever. And don’t even get me started about the clutch lever (the word “pretzel” comes to mind). Oh, yes . . . there is of course the minor issue of the completely bald tire on the back . . . Can we all say, “Hold your breath!”? Good! Very good! You just held air better than his tire. And a baby’s bottom actually does have more tread.

So, she rebelled a bit. See, she can’t just be “rode hard and put away wet” as much as we would hope otherwise . . . some of that foreplay stuff and that cuddling whatnot is occasionally helpful too. You know . . . ya gotta remember the “Thank you ma’am” part of the “Wham, bam, thank you ma’am” occasionally.

Of course there is danger in running off with a stranger, even if it is for a well-deserved break. See, I stuck her in the garage with the Valk . . . the apparently very territorial Valk . . . the Valk that is known as The Dragon . . . and no sooner had I gone off to get some other things done when they apparently had their first run-in. I get home and there are pieces of Nighthawk all over my garage. It’s not a pretty sight.

The Dragon just burped and smiled.

This is not an isolated incident mind you . . . bikes (other than mine) have a long tradition of getting taken apart into small pieces in my garage.

Anyway, busy times coming up. Got a bit of work to do to see what I can do for the Nighthawk, parts to be found, pieces to be banged upon. Oh, of course in all the running around, I discovered I have a bad tire (or balance, or wheel or something) on Big Iron. I’ve got to get that corrected, as I need the truck up to her best next weekend.

“Why?” the astute reader may ask.

Let’s see . . . somehow–I really do not have a clue how but it has something to do with feminine wiles–I have been tasked with driving out to North Carolina this coming weekend to pick up my wife . . . and some stuff . . . and some more stuff. It’s pretty near 1300 miles each way. 2600 miles of high-speed winter slabbing crammed into a weekend. Zoom Zoom!

I’m going to grab a little sleep, and then I am headed overland for North Carolina for a couple days. I’ve got to bring stuff back, so I’ll be taking Big Iron. Probably a good thing, given the season.

Depending on the forecast (coin flipper) I choose to listen to, the winter storm warnings are covering anything from 800 to 1000 miles of my 1300-mile route. They are unclear whether Saturday or Sunday is going to be the problem. Nauseatingly vague. I wish I had a job where such . . . precision . . . was acceptable. Doesn’t really matter, I am going regardless. Yet I always check the forecasts . . . kind of a strange fascination. Sort of like a train wreck I guess.

Anyway, I’ll leave you with this:

The warning has been given
And yes, I know the season
Yet the destination will remain unchanged
The journey is the reason

“Change your route, wait a day”
Some warn with impending dread
“Sit home safe, you needn’t go!”
Yet I must, for experience I was bred

The trip: Flawless victory. The forecast was BS, and apparently all the nasty stuff went north and east. I think I intimidated it and it went elsewhere. Sorry about that guys and gals up that’a’way, but there was road-tripping to be done!

Great run, flirting with the front. The influences and interaction between systems are subtly different and following slightly different rules during an event like this one. The interplay was interesting to see/experience. Temps between 82 and 12 along the route, sometimes changing so fast that the truck would fog up (on the outside! While traveling 75 mph!).

2600 miles of high-speed running. Gawd I do love road trips!

More on the trip later. 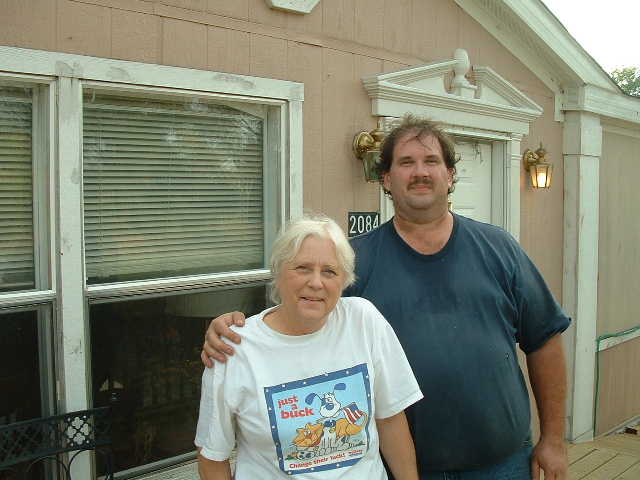 Dragon's Mom. There IS a reason for all that white hair! This picture is from last year, when she was recovering from a severe Horse Trompling (technical term). I had just finished building the porch we're standing on.

Unfortunately, I got home to find that my Mom is in ICU/critical. She apparently had a major heart attack between a week and 10 days ago and did not realize it until Sunday morning when she couldn’t breath enough to get out of bed. She thought she was having a recurrence of bronchitis but the x-rays and the enzymes tell the tale.

Cardiologist has determined surgery is the only treatment, but the surgeon says she won’t survive it at the moment. Thus, she waits in ICU with a balloon implanted to assist her heart and hopefully let it heal a bit.