Something Stupid This Way Comes

He had 4 friends with him in his truck, 3 of them unsecured in the back…(all girls I understand), and as much as I admire his ability to attract the opposite sex, he needs to engage his brain before putting his car in gear.

4-wheeling in an old rock pit, at night, he flipped it, throwing all the kids out of the back and tumbling down a cliff. Only a large tree stump kept the truck (with himself and another strapped in the front) from falling into the deep water in the bottom of the pit.

Miracles of miracles, nobody was injured. Frankly I can’t imagine why somebody wasn’t killed. Four ambulances, two fire trucks, and a half-a-dozen cops responded. Frankly, once they found out nobody was hurt, a minor bit of police brutality would have been in order. Sheesh!

A single-car wreck automatically equals “doing something stupid”, and with 4 passengers along for the ride?

If it was up to me he’d be grounded until he was 50. Surely the brains start to engage around this age?

The wrecker bill for extracting the pickup was over $650.

What’s it take to get through to these kids, eh? I’m hoping that narrowly avoiding killing 4 of his friends, skipping the manslaughter charges that would have gone with it, the financial ruin of his entire family of any of those kids had been injured, and the loss of his “ride” will help….

I’m grateful he made it through…and right now it’s a toss up whether I hug him…or kick his ass into next week. 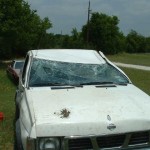 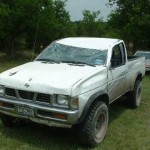 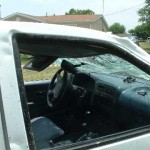