Well…I had to do it. Behold! Chipaquesos!

Many of you may be familiar with Howard Tayler’s webcomic Schlock Mercenary. If you’re not, you should be. Go read it!

Anyway, somewhere in the 31st Century there is a troop of hungry mercenaries rousting about. Assuming the galaxy lasts long enough until snack time, those hungry troops need one (a snack that is, grunts typically have no use for an entire galaxy…the storage fees alone can be crippling).

They had to act. After all, how many…ur…contractors…do you know that carry a plasma cannon and a couple sawed off multi-cannons? Oh, and a light armor division.

Everything you’ll ever want to know about the Chupaqueso is here. Anyway, it turns out these tasty treats actually can be made. I’ve made them, they are oh so good…(darn you anyway Howard!)

Hmmm…as best as I can tell, we’ve yet to come up with an actual vending machine…somebody needs to get to work on that. Due to the upcoming teflon shortage, I’m not sure how that’s going to work…but maybe we’ll figure it out by the 31st century. I sincerly hope it involves high-energy particle beams, but that’s just me.

After a long day of caffeine induced IT type madness, I fell into a fitful sleep. That would be a good thing, but then a clever play on words popped into my fogged mind. Anything can seem clever at that unholy hour.

“(gasp) AHHHHHHHHHOOLY MOTHER OF MIDNIGHT WHAT ARE YOU YELLING ABOUT!!!! (gasp, gasp)” said my wife. Hmmm…maybe screaming out my inspirations at 2:00am isn’t such a good thing.

From my new resting place on the couch or, well, actually, I slept near the couch as the cat wouldn’t get off it, I dreamed of them. Them as in chipaquesos, not cats. Mmmm. Chipaquesos. 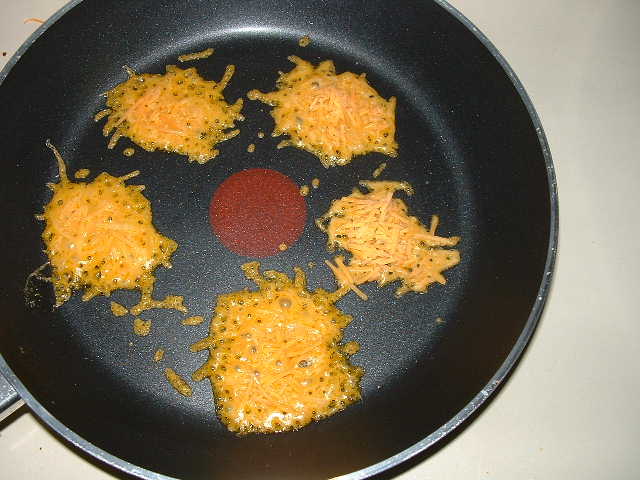 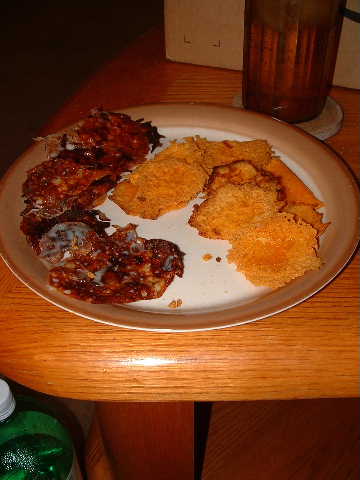 It works MUCH better with the Chedder. They are ready to flip when you can push them around the pan by the edges with the spatula. Flip ’em and then pull ’em about 10 seconds later. The mozzarella I over did a bit, but the chedder was much easier and tastier especially dipped in a bit of sour-cream, although salsa would have worked too.

Howard…I blame YOU for this. And thanks!

The rest of you…go read his webcomic.

This entry was posted in Recipes, Webcomics. Bookmark the permalink.

4 Responses to Well…I had to do it. Behold! Chipaquesos!