Hershey went in Tuesday morning for surgery on his hip. During the extensive pre-surgical examination, they discovered that he doesn’t have hip displasia afterall. That is not good news.

What he has is a large tumor that destroyed the hip and forcefully seperated the joint. It is now consuming the bone. It was remarkably evident on the current x-ray…but not at all on the one taken just two weeks ago (until you’ve seen the newer one and know exactly where to look on the old one). It is growing rapidly. It’s currently about the size of a softball. We have seen the physical changes evident outwardly in the last couple days or so.

Basically, he has inoperable bone cancer, 98% certainty. The tumor is part of the hip AND the femur…if it was just his leg, they could remove the leg and if he survived the operation, AND the cancer didn’t spread…he could still have quality of life.

The prelimary surgical exam/testing (to make sure he could tolerate anesthesia) cleared him for narcotic pain killers, so we have a supply of those ($100 bucks worth).

He’s still a happy dog…he got to stop by the farm on his way home to play with all Mom’s dogs and a couple of the more tolerant cats, and I think even the rabbit said, “Hi!” (I’m pretty sure it was “Hi!”…I don’t actually speak rabbit…)

When we’re riding in the car his tail wags so much the vehicle shakes. He had a ball at the vet…even though they are poking and prodding he is always glad to see them. There’s not a mean bone in his body. (He’s lying on my feet as I write this).

He’s also thrilled that we’ll actually throw the “kong” (his ball) for him again…we had been avoiding that to minimize further damage to his hip…we now know that was pointless.

He obviously is experiencing pain though. That’s also impacting his appetite, particularly over the last couple days he is having difficulty standing up from a lying down position.

We will be watching how effective the pain killers are and the progress of the tumor.

The decision is inevitable. Only the timing is adjustable….and probably not very…

Damn. Sometimes I hate being an adult.

… I expect that’s a lifetime’s worth.

Hershey at about 6 weeks age 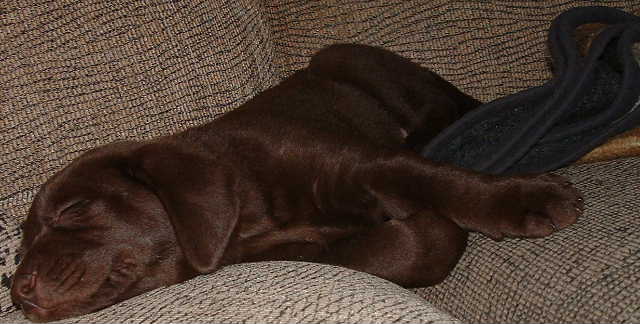 Hershey a couple days ago 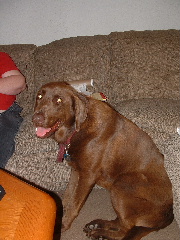 This entry was posted in Mood, Pets/Animals. Bookmark the permalink.