So, what is this? World’s biggest hockey puck? Extreme cheese wheeling? (my favorite suggestion!), a giant valve shim of an XS11? Well, the answers are here.

What does this have to do with motorcycles? Well, not a damn thing. But it’s interesting, and it was a hell of a lot of work, and I took pictures (more pictures below!). Thus, you get to read about it…well, if you want to anyway. I can suggest several great motorcycle books you can read as an alternative if I’m boring you here. Heh.

Anyway, my Mom and step-dad (who’s also my friend) Mike live on acreage in east Texas. For those of you that live in the cities or towns, understand that America, and Texas in particular, is a great big place. The vast majority of the land area doesn’t have water service. Generally, it’s not a big deal. Sink a well and water is available.

Mom and Mike’s place has a 33 foot hand-dug well. It was probably dug a couple generations ago, and was never intended to provide water for a modern household. It probably never had the recovery rate for more than drinking and minor cleaning etc, but made up for it in storage volume. 33 feet deep and 4 feet in diameter holds a bit of water after all.

With the drought this year, the water table has dropped and so has the storage AND recovery rate.

So, just what do you do if the well runs dry? Well, particularly if it’s a hand-dug shallow one, you call Wells R Us and have a new one drilled. There are two problems with that approach. First, it is expensive…for the geography around here probably in excess of $6000. Second, and more to the point in this case, there is a 16-week (or more) waiting list for a drilling rig/crew. Sixteen weeks without water is a long time.

Of course, drinking water is not a problem…a bottle or two from the store every couple days will do the trick, but what about the simple luxuries like bathing, laundry, and how about flushing the toilet?

Most small towns will sell bulk water from the municipal water supply, but in order to run a household on it, even for 16 weeks (or more), you’ve got to be able to transport, store, and pump meaningful amounts of it. And since budget is an issue (as it is for most folks), you’ve got to find a cheap way to do it. Tankers and such are expensive.

Texans are a “can do” people, so we did. What we did was the least expensive, effective solution that doesn’t involve radical lifestyle changes like foregoing bathing, toilets, clean laundry, etc.

The truck also has a full tank of gas…which will be needed…all of it. Twice. Mom and Mike’s place is a well over 100 miles from me, and they are ten miles out of town (where we can get water).

Unfortunately loading the truck and trailer involved 4-wheeling in the mud, unloading several large-round hay bails off the trailer, pulling the big tank out of a mud surrounded barn (with much creative swearing involved). The tanks are not heavy, but are extremely difficult to get a handle on in confined spaces. 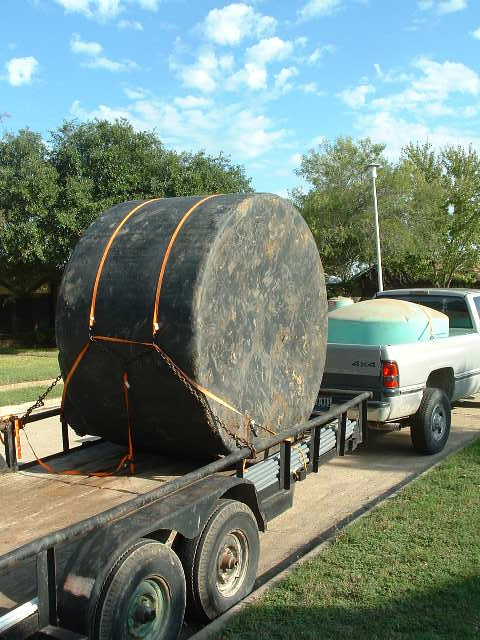 1550 Gallon poly tank. This is actually the bottom you're looking at 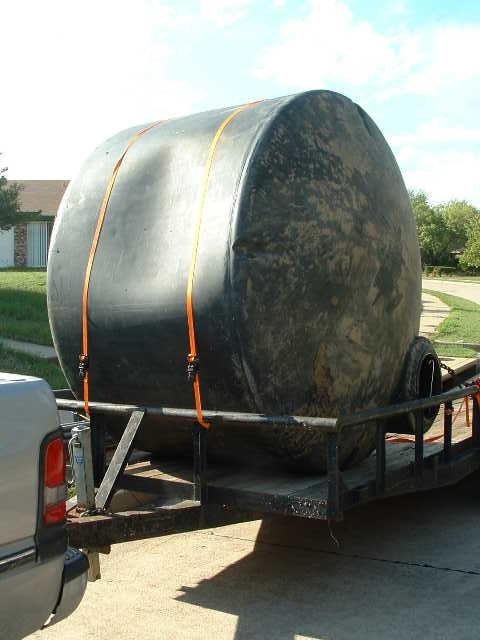 The top of the 1550 gallon poly tank, showing the access hatch. The cover's in the truck 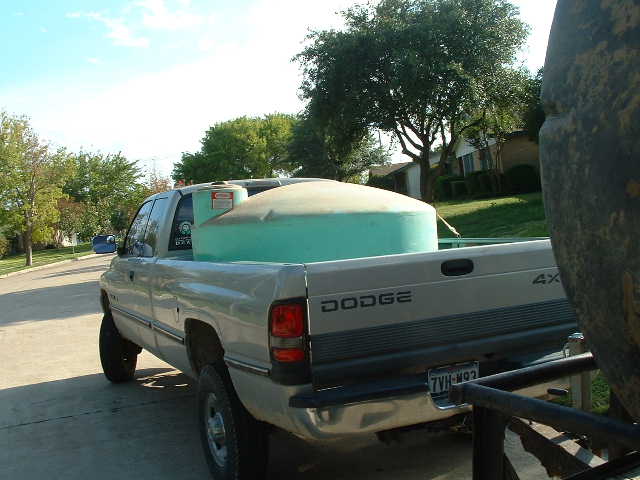 Water is heavy. Make that heavy! A gallon of water weighs 8.34 pounds. My truck is a 3/4 ton truck. That means the load carrying capacity is 1500 pounds. The transfer tank holds 425 gallons, which weighs nearly 3500 pounds! So, can I load a truck 2000 pounds over it’s capacity and safely transport it without damage? Of course! I’ve got a Dodge.

First of all, the 450 hp V-10 doesn’t even notice. Second, the brakes they put on this monster so it could tow 10,000 pounds don’t even notice. Third, and a secret you may not know…3/4 ton Dodges have the same axles 1 ton Dodges have (just no dually wheels). So, I’m really only 1500 pounds overloaded. Another secret? The axles in this Dodge are Dana 60s. Full floater bearings and monstrous gears make these the toughest axles available. Working man’s axles. This is why I buy good stuff. So I can use it when I need it without worrying. I’ve long experience in abusing trucks. If you can get it in this truck, it’ll haul it. Farmers, ranchers, working men, and other practical people know this. Why else do you think they make a 425 gallon pick-up mounted transport tank?

I got a decent night’s sleep, and pulled out at 6:00 am Friday. Battling suicidal commuters wasn’t really a problem…as even with the weight of the trailer and the wind load of the water tank, Big Iron can hold her own. 80 mph and she doesn’t even feel it…either in handling or available reserve power. Gawd I love that V-10! 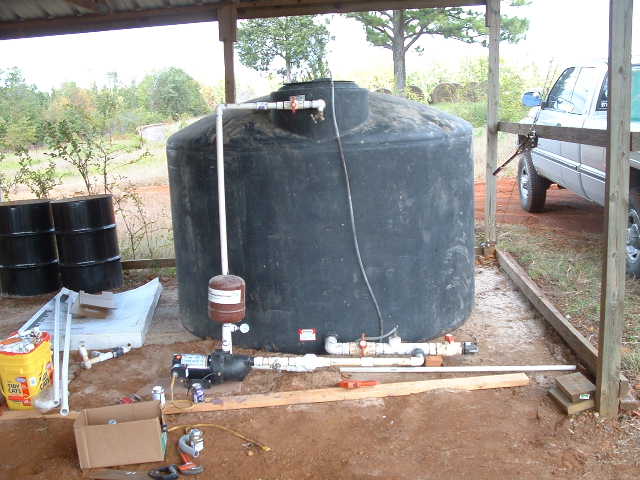 Installed and plumbed to go

We rolled the tank off the trailer and rolled it into the barn. The hardest part about that was the cats. Several of Mom’s cats were intensely curious about what we were doing, and I had to be careful not to run over one with the “very large and hard to see around while it’s rolling” water tank. Plopped it down on the surface Mike prepared (leveled and sand), and then we plumbed it up. 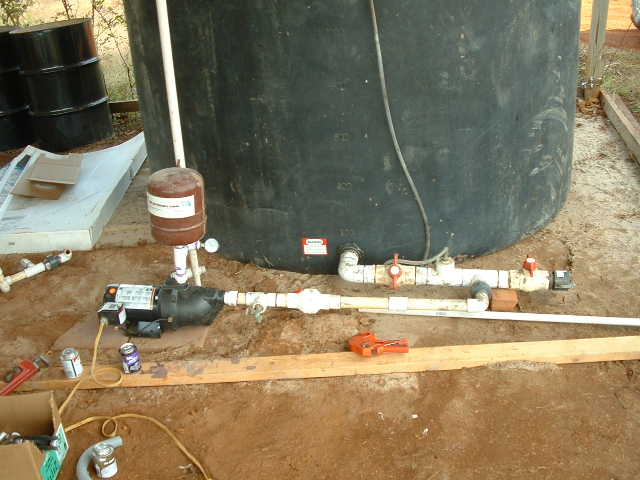 Check out all those valves! 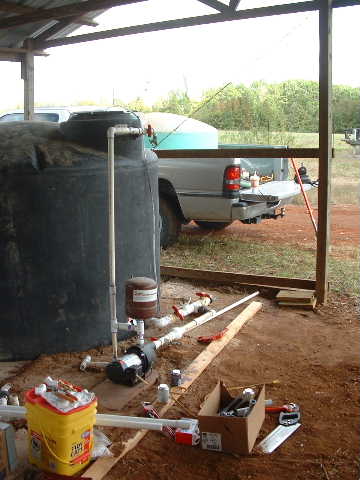 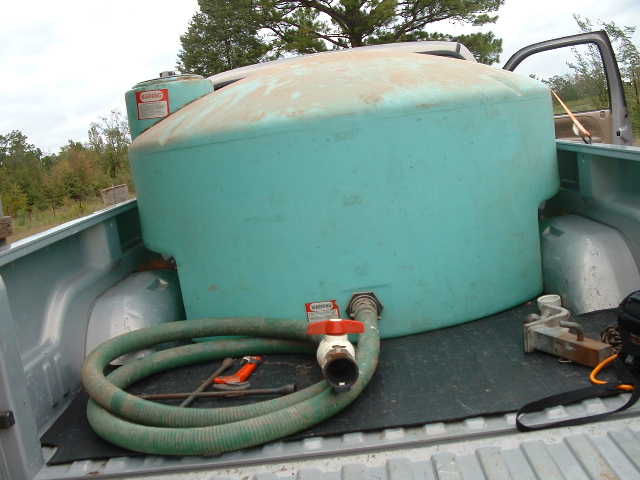 I didn’t get a picture of it, but we drove to town and filled the tranfer tank. The city bulk water station is a fire hydrant with a hose on it. It takes 3 hours to fill this tank from a garden hose. It takes three minutes from the fire hydrant…and that was barely cracked open. 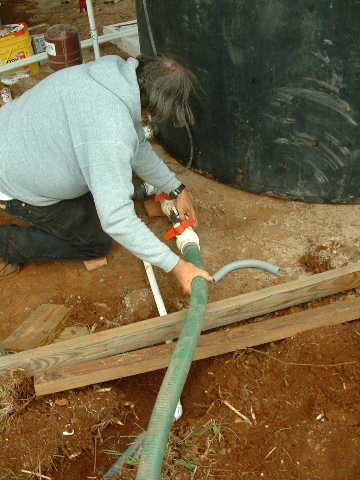 Mike connecting the shuttle tank to transfer the water 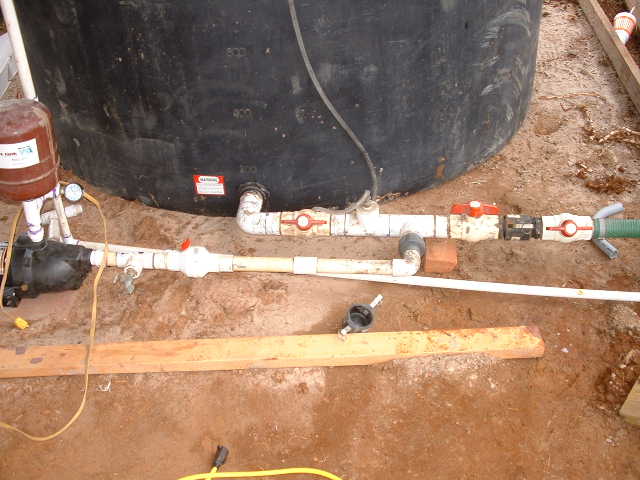 Water transferring. Not a lot of entertainment here.

The purpose of that mess of plumbing is so that we can pump pressurized water to the house AND fill the tank with the same pump. Remember the budget thing? Pumps are expensive. The first two transfer tank loads (800 gallons) can be transferred via gravity due to the height of the truck. However, once the water level in the storage tank reaches the level of the water in the transfer tank, we have to pump it. So, for gravity (free and fast) transfer, the big valves are opened and the water flows into the fitting at the bottom of the tank. Once the level is equalized, the biggest valve on the left is closed, the valve on the TOP line of the tank is opened, and the pump is activated, sucking the water out of the transfer tank. Since there is low (head) pressure when filling due to the wide open valve on top, the pump will move about 30 gallons a minute. We ran three loads of water today, or just under 1300 gallons. That’ll last a week or so, or more of they are careful. To put it in perspective, that’s enough water to flush the toilet 1000 times, do around 120 loads of laundry, or enough for maybe two teenager’s showers.

Oh, and the hard part. Gad. We had to connect the pressure side of our new contraption to the existing water system. Since black poly needs to be out of the sun, the storage tank had to be in the barn. We had to dig a ditch to the other well and run a water and electric line. The old well can still be used that way (when there is water in it again). Due to the distance and time required to go rent a trencher, and to help with the budget, we dug the ditch by hand. Mike did use a drag bar on the tractor to break up the ground first, and that was a huge help…but still we had to dig out a 90 foot ditch. 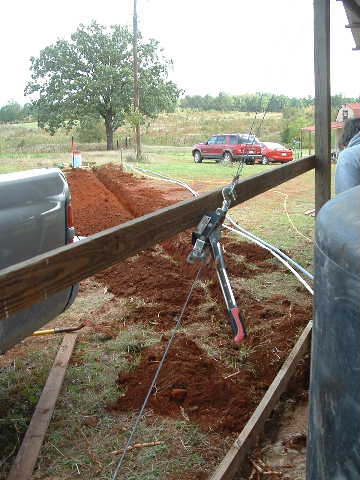 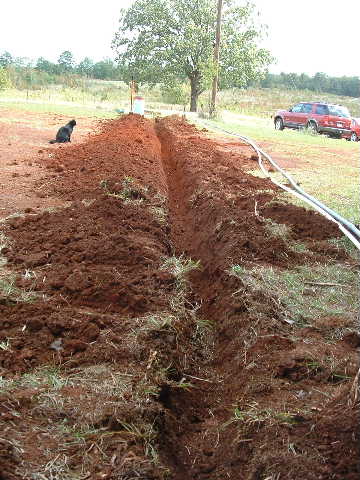 The big black cat (Mimi) refused to help dig, and is probably wondering if it's bad luck for a black cat to cross a ditch's path.

The pipe and conduit runs are glued together to the right of the ditch and ready to be dropped in. Finish the end connections and we’re good to go!

I had expected the job to take more than one day…since we are usually doing this in the heat of the summer and that takes a lot out of you…but the temps were cool and we were able to work essentially straight through. WooHoo! Done!

We topped off a very busy day with a fine dinner of Mexican food at a great hole-in-the-wall place in Rusk.

The 100+ mile trip home was under a quarter moon, totally alone (late Friday nights, people apparently don’t drive the back roads much), windows down to the perfect 60-degree weather, and listening to the lonely wail of the truck tires carrying me through the countryside. Ended up running over 320 miles before everything was done.