I’ll never forget…we were moving in and this little black girl cat marched in like she owned the place and demanded to know what was going on. No, she doesn’t actually speak English…but nonetheless, she was quite clear about what she wanted to know, which basically was, were we actually qualified to live with her?

Yep, the house came with a cat.

I called the former owner.

Ah. So that’s how it was. I wonder how they explained it to their three little girls? Oh, I’ve got no problem with people that have to find a new home for a pet…life happens…but they should at least be a man about it.

Anyway, the house came with a cat. The wife’s been carrying on conversations with her ever since and all the other pets had to meet the cat’s approval.

She was full grown, and I expect, about two years old. She’s always been healthy, but that ended when she got poisoned by the bad cat food this last spring. She’s never really recovered. Nobody’s taken responsibility for that yet btw. There’s not even a process…

She’s a grand old lady. When she went to our (then) new vet (a competent and compassionate man) over the pet food mess he classified her species as “Geriatric feline” LOL!

Yeah, she never fully recovered from that. But she made it 14 years with us. I expect she’s 16 or 17 years old.

Recently she’s not been eating well and she’s been losing weight.

Yesterday she stopped eating altogether. She’s nothing but skin and bones. She wants affection and purrs when she’s getting it, but she’s in pain.

Tomorrow, yet another “last ride” to the vet. It’s never an easy thing.

An older picture of her: 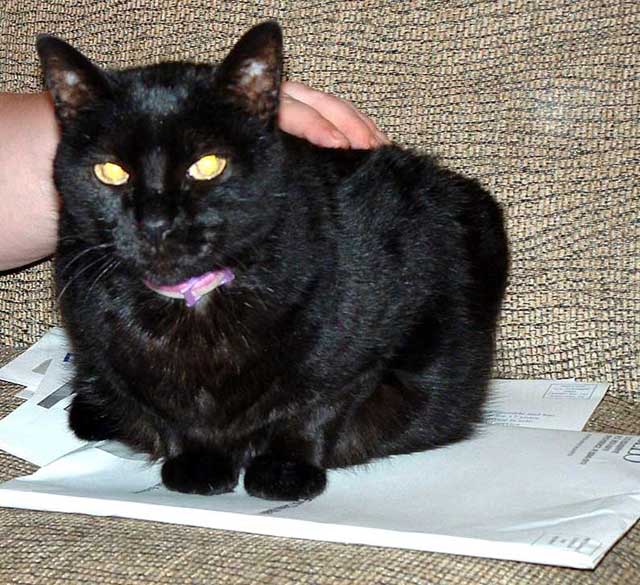 This entry was posted in Home/Office, Mood, Pets/Animals. Bookmark the permalink.