Last weekend, my friend and co-worker Robert, whilst taking a leisurely jaunt about the hood, t-boned an attacking dog with his bicycle. The short of it is, He fought the dog, and the dog won.

Robert went down hard and broke his hip. He’s since had surgery, yah know…screws and plates and a forever hassle in airport security, and is expected to be off his feet for 6 weeks or more.

So, Robert joins “Team Faceplant, Bicycle goes Scrunch Division”, which is a collection of friends and coworkers that have required hospitalization and/or ambulance services after going out for a morning bicycle ride. We motorcyclists keep telling them they need to take up a safer hobby…like chainsaw juggling, snake charming, or even motorcycling. 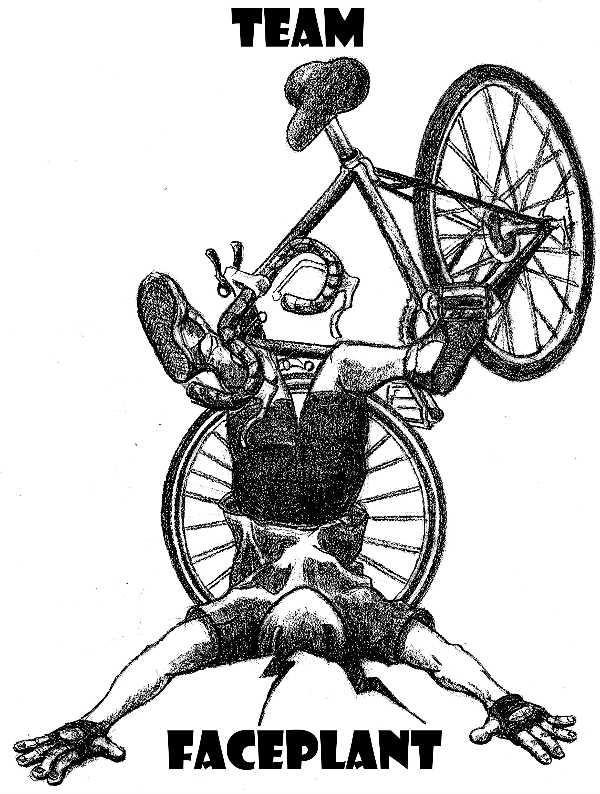 My friend Ron, who also illustrates my books, whipped up this design for the “Team” after a rather large number of them had been down. We think it’s about 100% of them now. Bicycling is dangerous business.

Robert will be presented with a polo shirt that has this design, a matching coffee mug, and of course, a yellow “Team Faceplant” jersey (bicyclists have something about a yellow jersey representing the champion or something).

Y’all have fun with your chainsaws, snakes, or motorcycles…but for heaven’s sake, be careful with those bicycles!

This entry was posted in Friends, Work. Bookmark the permalink.