You know you’re a Sci-fi geek if…

Today, NASA’s LACROSS mission intentionally crashed a projectile into the dark recesses of a crater on the moon. The intent was to make a debris ploom that a trailing spacecraft could fly through and analyize. They intentionally chose the dark recesses of the crater simply because we can’t readily observe such a place and the fact that it’s never been in the sun may make it more likely to have water…which is what they are looking for. 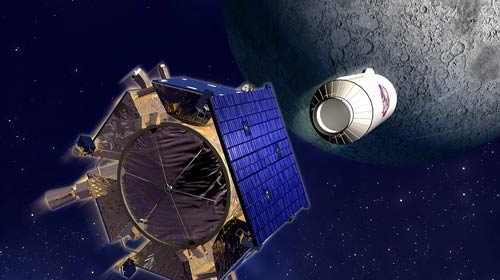 Cool stuff huh? Apparently it went off without a hitch!

But you know you’re a sci-fi geek if the first thing that comes to mind is physics and the relativistic bomb…essentially, in space, you accelerate a large mass to as close to the speed of light as you can, and aim it at a planet. Boom! Gone. I think it was a Heinlein or Niven invention, but it could have been AC Clark or a number of others. I’m over exposed to the old masters.

So, anyway, I’m picturing some alien space force…an advance contact scout unit or something overtly friendly…but prepared…sets up on the moon in a remote and difficult place…like the dark recesses of a crater…so they can check us out for a bit. You know…get the feel of the place.

And we find trace elements of water and other very interesting stuff in the debris plume…mainly because we nailed the alien base with (our very slow) relativistic bomb.

“Hey look! Water!” turns out to be the phrase that declares war on an entire alien species.

Yeah…you know you’re a sci-fi geek if that’s what you think.

But…You know you’re a complete :uber, lost cause sci-fi geek if, after you think up the above scenero…you then think, “…Annnd that would be SO cool!”

CUAgain,
Daniel Meyer (off to buy some ammo and a pirate hat for the impending alien invasion)

This entry was posted in Humor. Bookmark the permalink.