Standing in the garage…not knowing why I had gone there, the keys to The Dragon dangling from my hand.

I shrugged, mounted the big cruiser, and stuck the key in the ignition.

…and the world exploded. 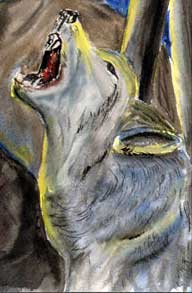 I found myself sitting on a large sand-colored rock in the middle of the desert, idly swinging my feet. A light wind caressed my bare arms and I could smell the night air approaching. The flaming reds, oranges, and yellows of the sunset painted everything in vivid surreal hues.

I had no clue how I’d gotten here, but remained unsurprised. The last thing I could remember before the garage was drifting off to sleep beside the wife in our bed that had to be a half-a-thousand miles from here…wherever here actually was.

There were only bits of scrub brush and cactus, and a few other rocks, all surrounded by undisturbed windswept sand for as far as I could see. No sign of man reached this place. No footprints. No roar of the highway. No sound of airplanes. Man and his machines did not reign here.

Shortly I decided that I’d been here before…and that here wasn’t actually anywhere. So. A dream then.

I used to look forward to them. They’ve been coming few and far between lately. Nightmares have been far more common.

Resigned, I shook my head. I used to own the night. Grimly I sat there and waited for whatever was coming. I knew quite some time passed, even though the sunset never changed.

Eventually, a gruff voice spoke beside me. “Waiting is unlike you Rider.”

I jumped. I never saw him arrive. I only became aware of him when he spoke. One minute, nothing, then suddenly he was sitting beside me on my rock and staring out into the distance with his piercing yellow eyes. His muscles rippled under his fur and stature was such that his head was easily on the same level as mine.

Ah. The white wolf, an old companion. A guardian, or guide, or the subconscious manifestation of an instinct. Perhaps even, as one young lady once put it, “The delusional construct of an immature mind.” In her world apparently, there are things you are not supposed to see, much less talk to in the daylight…or even in your dreams. She lives in a smaller world than I…or so I believed.

My attention focused on the wolf. It had been a long time since we last spoke. Too long. I had to struggle to remember his name.

“You once counselled me to patience Lucious,” I slapped the rock we were sitting on, noticing for the first time the gouges left there in the past by another of my guides. It startled me that they looked a thousand years old. I gazed directly at the massive creature, “In this very place I believe.”

I recoiled as he growled and snapped as his head spun towards me, “And YOU were wise enough to know to abide me then!” his voice softened as he turned once more to look out into the desert, “And as importantly, when not to.”

Thoroughly chastised I said nothing. I didn’t know why I was here, but felt that I should.

We sat in silence and watched the unchanging sunset.

Eventually my hand brushed the gouges in the stone and I thought of my other guardians. I have always had powerful instincts in my life. The wolf. The owl. The dragon. Teacher, wisdom, strength. Together, sheer magic. Apart…they are lost.

Suddenly I missed them with an urgent foreboding.

I looked again to the wolf. “Where are the others?”

He spoke quietly, “They have faded. You’ve accepted the mundane and left no place for them here.”

My voice strained in anguish, “That was never my intent!”

He looked again at me…through me, “Intent? No. But it’s the easy path…and the one most take. They are everywhere, those just drifting though life. No direction. No hope. No dreams.”

“I have dreams!” I protested.

“That you do, Rider, but you must continue to act on them or they are naught but dust. You have lost your way, and it is a hard path to stay on. You know not how far you’ve strayed. Even I am not fully manifested any longer.”

I stared sharply at him. He was my scout…my teacher…that spark that tickles the wanderer’s soul. Not all here? What was missing? What was left?

With a shock I knew. The Lone Wolf. That was all that remained.. The burning drive without the direction. The intense experience without the lessons. The horrendous cost…without the pleasure.

Death, when first there was no life.

I’ve seen those people. I know their eyes.

I reached up to stroke his shoulder and mumbled, “That’s no way to live.”

My hand passed right through him as he faded to nothing. On the winds I heard his faint reply, “It’s your choice Rider.”

I have the dreams. I know the path. It’s just hard work to get there…and harder work to remember where there is. There are things that I have to change. There are efforts to abandon, and others I must redouble. Influences to embrace, and others to avoid.

I have work to do.

I looked around at my rock in the desert, resolving that I would pass this way again very soon…and that ALL my guardians would be here then.

I snapped my fingers and my motorcycle appeared, the big machine gleaming in the sunset. Somehow I mounted her without disturbing the sand.

I found the keys dangling from my hand, and reached down and stuck the key in the ignition.

…and the world exploded.

This entry was posted in Riding, Road Stories. Bookmark the permalink.