Roaring through the night…cutting through the wind and making the road our own. The intensely orange three-quarter moon low in the eastern sky casts an odd pall over the highway and creates the perfect setting for my black mood.

Hard off the exit ramp. Change roads. Turn to the left. Throttle. Clutch. Shifter. Slam her through the gears. Touch the brakes to make sure they are there and up. Gonna need ’em on this road.

Summer in Texas. The hot winds of the night stir my emotions and evoke deep thoughts. The combination forces some serious soul searching.

Looking deep into myself is often where I encounter the most dangerous things.

Tight left corner. Hard Brake. Apex. Throttle. Lean. Knee out. Push the bars. Let her slip to the outside to graze past the dark mass of smashed meat poised near the center of the road to snare the unwary. More lean. More push More throttle. Life hangs in the precise manipulation of the controls and center of gravity. Blood and gore flash past.

The kill is a fresh one and as the engine’s lonely wail reflects back to me from somewhere in the night I wonder why I know that.

I continue to push the heavy cruiser through the darkness. The Dragon and I are out here for a reason…even though we don’t know exactly what it is.

This is one of those nights…something was bugging us…something had driven us out here. We would find what we were seeking or maybe simply run through the night. I reflected on the roadkill we had just missed and thought of a third possibility; we might just perish trying.

A sweeping right turn. Set up the line. We’re a little hot but I don’t even touch the brakes. Lean. Push. Perfect entry. Hard throttle to swing us around. Perfect attack! Elation!

Is the machine an extension of the soul? It seems to me that the works of man…the ones we are passionate about or sacrifice so much to achieve…take on some of ourselves.

But perhaps not. Some have suggested I carry my own personal demons…or maybe an angel or two. “Some” seem nonplussed when I chuckle at that notion and say that I’d be flattered if heaven…or hell…deigned to pay that much attention to me. Later, when they are more comfortable and sure of themselves they’ll suggest that the machine is dead…that it’s only a hunk of metal fitted together and set to a task…and that I simply like to talk to myself.

Inert metal. Demon. Angel. Perhaps only myself, running solo in the universe and struggling to make sense of the world and my place in it. Perhaps it’s all of that…forged in the Texas heat into something that resembles a man with a purpose.

Which is which? What parts are what? Does it really matter?

I didn’t answer. Of course I had. It was like an earthquake in the depths of my soul…or perhaps a tear in it’s very fabric. Mentally it was like a lightning strike. There was physical pain.

Boss…What’s it mean?
“It means I’ve let it go for far too long.”

I consciously forced myself to reduce speed. I’d been pushing steadily harder through every corner…daring every challenge…running it right to the edge. Piloting these machines is an act of sheer will…but there is a limit to the physics. There was no more slack for me to push into.

She’s been with me a while. Ten years in this form. More than thirty years in others. She’ll remember the previous changes.

Yeah boss. A big one.

I just grinned. She knows me. Perhaps better than I know myself. Sometimes anyway. Perhaps it really is the same thing.

I winced in remembered pain. I still have scars from the last one. That was an odd night…even for me…and accomplished little.

Besides, where the heck would I get an old Cessna engine/prop, 24 pounds of black powder, a realistic orangutan suit, a Bull-Taco, and a 1972 Gremlin in THIS economy?

I shook my head, “No babe. Not like the last one.”

We rode in silence for a while…only the lonely wail of the engine and the roar of the wind to keep us company. The road seemed to anticipate our needs and ran straight and clear for a few miles.

Thoughts gelled. Problems arose. Solutions presented themselves. Some things I shelved for later. Some I ignored. Some I simply snarled at.

Yep…a change. A shift. Attitude. Actions. Plans. Time-lines. Lots to work out. Big stuff. Small stuff. Most will take a while. Some, not so long.

Life is somewhat complicated, and I wonder what happened to the man that could simply hit the road at a moment’s notice and fly…consequences be dammed.

She’s been The Dragon since shortly after I got this machine. Ten years now. As other machines she’s had other names. Some whimsical, some deadly serious. Sometimes they change.

“The Dragon”…I thought over it a bit…She’s carried me to marvelous encounters…and carried me away from those that I might not have survived. “The Dragon” has been appropriate…but lately…I’ve needed something more from her. Something nebulous. Something not quite defined.

Astride the machine…it seems like we’re still but the world roars past us on both sides. We have to dodge and turn so none of it hits us.

A mile. A minute. Distance and time are the same thing.

I chop the throttle and let the machine coast to a stop. A flick of the key and the lights wink out. The orange darkness of the moon-tinged woods surrounds us and a cool breeze tentatively brushes by.

I stand there astride the machine for a few more moments, deeply inhaling the rare cool breeze and settling my thoughts.

The Dragon was gone. In her place was something more. I was relieved…as I’ve felt the change coming on for quite some time and was afraid…deeply afraid…that there was no place left in my life for her in any form.

Apart we exist. Together we live. But life cannot be stagnant. We most grow or perish. For us to grow together still was my desire, and it will serve us both well.

For me, a new attitude…some new challenges, the shedding of some old worries. For her…a new name…some additional purpose. Perhaps a new look, down the road a bit.

Moving on is often painful and traumatic…but moving on is required. And move we shall.

I flick the key and thumb the starter. The machine rumbles smoothly to life.

Running hard down the road…the moon beginning to set in the western sky. Places to go. Things to accomplish. Tasks to explore. New challenges to attempt. Wrongs to right. Hell, maybe even demons to slay.

“Hey babe?”
Yeah boss?
“Thus it is not possible to escape the mind of Zeus.”
You know it boss!
“Then let’s go get his full attention!”

As we scream through the night and into the morning, Pandora’s ready response to the subtle inputs on the controls is the perfect answer. 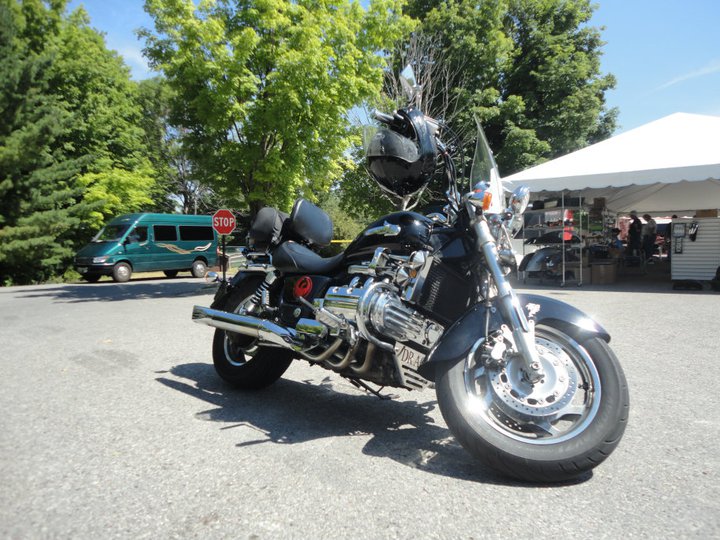