It was going to be a good night.

It had taken several hundred miles to blow the stink of work off me, but finally I turned for home. One of ’em anyway. Being a distance rider and having two houses can be problematic sometimes…gotta remember which one to head for…

There is something seriously wrong with the campus I work at in downtown Dallas. Shifting tides, phase of the moon, wind direction, or maybe it’s the number of VP’s on-site…but on random occasions something causes a tremendous stink to permeate the building.

Swamp gas…sewer vapor…something tangible and toxic drifts through the building causing gagging, watery eyes, and coughing all about. Ur…especially for those of us that work on the lower floors.

Shortly afterward comes the overwhelming caustic bleach/soap smell when maintenance, failing to determine where the stink of the dead is coming from, simply dumps whatever cleaning agents they have on hand at the moment down the floor drains.

This is not an improvement.

Friday it was so bad that by the end of the day my throat was sore, my sinuses burned, and I was losing my voice. Heh…at least I couldn’t smell it after 8 hours or so immersed in it. Only when I walked outside did the “fresh” hit me.

One day I’m gonna die of a mysterious lung ailment…or my asthma will kill me (I’ve had it all my life)…and you watch…they’re gonna blame it on my weight. I can see the doctors in autopsy now:

Doc 1, “Man, look at those lungs. See how much damage being fat does?”
Doc 2, “Yeah. Terrible isn’t it. It’s almost like he was breathing Hydrogen sulfide and ammonia over the long term!”

Yeah, somethings wrong with our building. Somethings also wrong with a management structure that doesn’t insist they find the problem and kill it…if this was a government building they would evacuate it.

Mostly to myself, “I vote we take off and nuke the site from orbit.”

Response from coworker, “It’s the only way to be sure.”

I do love my coworkers.

The vote was unanimous. Unfortunately pooling our lunch money didn’t quite come up with the fuel to launch an orbital vehicle, so we put our heads down and worked.

Gad, I thought, When did I become such a cube whore?

A few years ago I’d have called the boss and told him I was done for the day, or at least until they procured a better smelling toxic nerve agent. I mean really, if they’re gonna kill us off they could at least make it smell nice. The thought was soon lost when the phone rang and the next in an endless series of critical problems announced itself.

After a long day of gasping for breath and chewing on my asthma inhaler I finally escaped, running the Valkyrie hard north and west simply because the traffic was lighter in that direction.

My third gas and go…feeding the big thirsty machine beneath me…when I realized I’d cleared the city many miles ago and hadn’t even turned for home yet.

That single thought was all it took. We’d been apart for days, our various responsibilities conspiring to put us in different cities for the week. It’s times like this that remind me of what I am…of how I’m made…of the passions I embrace, and of why I live, instead of simply existing.

I’ve been doing too much “existing” lately.

Passions drive me…and they drive me hard. Unapologetically male, I have no need or desire to change that. I am what I am. There are those that insist I should be otherwise. It seems that passion for riding, for my wife, and for life and the adventures to be found in it is unseemly and something to be tamed…or eliminated. Somehow a passionless life has been elevated to be “civilized.” We’re not supposed to be excited about life. We’re not supposed to stand for something. Mindless drones. Yeah. Weee. Heh…they can suck it.

Inhaling deeply of the night air I grinned and squeezed the last few drops of gas into the tank.

I jammed the big machine through her gears and hit 70 before I cleared the lights of the station.

A clean run. The last 150 miles of it under fabulously clear Texas night skies and brightly lit by a three-quarters moon. Friday night…the chill of Autumn just a hint in the air. As the speeds slowed in various small-town Texas I could see the lights and hear the bands…and sometimes the roaring crowd. High school football. Good to know it’s still going on. Some of it seemed to be going on pretty late though.

Running all back roads, I hardly saw any traffic outside of the towns. The endless ribbons of asphalt were mine to run…to master…and I took advantage. Speeds climbed to unsafe levels and the miles flew by.

The week’s tension drained from me much like the stink of the city blew out of my clothes. The night air was crisp and clean, yet never the same for more than a moment. Cut hay, feed lots, lumber mills. Water in some of the valleys. I saw little of these things in the night, but the smells announced them as if they were lit by the sun. The occasional skunk or other roadkill had a similar and most vivid effect.

Stretching the gas. Even the small towns now usually have a station that will take cards at the pump after they’ve closed. At one of these, lit only by a single light, a county sheriff surprised me. He walked up behind me undetected.

“How’s the night?” An interesting way of asking.

“Perfect.” was my immediate reply.

“Clocked you at 92 coming into town.”

“Ah.” I didn’t believe it, I had pushed the fuel too far and was coasting when I hit the town limits, but felt privileged that he cared enough to lie to me.

“I’d appreciate it if you’d keep it to the speed limit till you get out my radar range.”

And that was that. There is hope yet for those of us that play in the night.

Fueled and grinning, I did as asked. After that, I did as desired.

“Home” didn’t take long after that. The bright moon made dodging the wildlife somewhat easier, even at these speeds.

Home. As much as I love the ride, coming home is fine too. She heard me arrive, and was waiting at the door.

Sometimes the passion moves her too, and together we can own the night.

If it doesn’t do the same to you…perhaps you’re not doing it right. 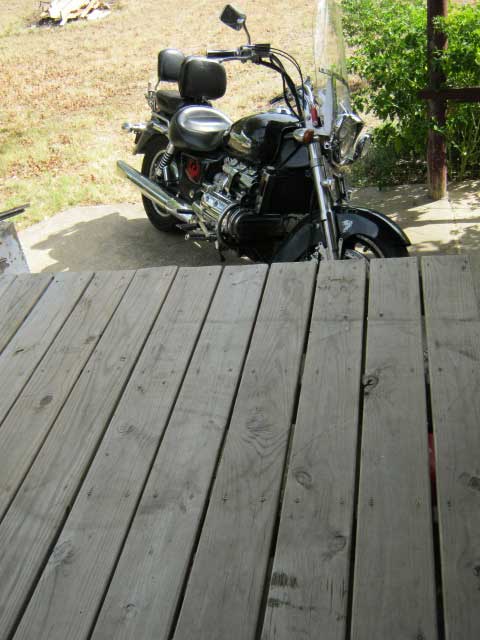 Sometimes you have to ride out...just to see what you've left behind you.