After a fabulous morning commute, slamming the big motorcycle down the freeways in perfect temperatures, gorgeous blue skies, and light traffic, I pulled to a stop beside an SUV at a stoplight in downtown Dallas.

I glanced over at the SUV to see a large bulldog with his head hanging out the left backseat window, looking me over. He had that distinctly doggie “windblown” look that told me he’d been riding like that all the way down the freeway. He also clearly had that demeanor of an older dog that’s been around a while.

He didn’t bark at me…he softly “spoke” it…sounding exactly as if a person had said the word.

“Wuf.”
I, of course, nodded and spoke back. “What’sup doggel?”
“Erf wuf errreal wuf wuf erf.” We were now clearly carrying on a conversation.
I looked at the sky, “You’re right about that. It’s a perfect day for riding.”
“Wuf erl wuf efff?” It was obviously a question.
“No, I’m about done. I have to go to work.”
“Errral wuf.”
“Yeah, it does suck, but I gotta pay for the gas, ya know?”

At this point the bulldog looked forward at the driver of the SUV, an attractive soccer-mom-ish appearing lady. She was watching me with a mixture of open-mouthed fascination and disbelief. You’d almost think she had no idea her dog could talk.

“Ufwuf erfuf.”
“Thanks, she’s really cool for driving you around, but I’m sure she’d rather I pay for my own ride.”

At this point the light turned green.
“Wfffwufinfer.”
“Well thanks! You have a good day too!”

A twist of the throttle and I was gone. Two streets down when I had to turn I could still see the SUV in the mirror, stopped at that same light.

I wonder what kind of conversation they were having? 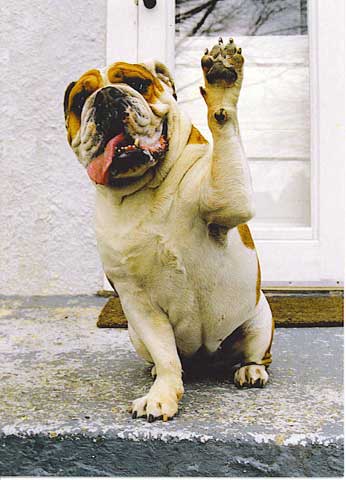 Disclaimer: Not the dog I was talking to. Looks a lot like him though.