Wednesday Evening:
Okay…I’ve said it before…hail pretty much sucks. I’ve got welts all over…including a couple that would be classed as contusions. Right arm is pretty much useless at the moment. I took a hailstone to the wrist.

Also, a couple new dents in the Valk.

The highway shut down as soon as it started hailing. Nowhere to go…lots of quarter sized coming down heavily, then golf-ball sized mixed in. The occasional tennis ball whistling through the air and “thunking” off something. You could hear them coming even over the noise of the rest of the hail and the hits on my helmet.

Shattered the back window out of the car directly in front of me and one beside him. Saw many more after it was over and traffic broke up.

Thursday Update:
The small welts are gone…but I am stiff and sore all over. Frankly, I lucked out.

The big stuff was coming down at an angle, fortunately from the front. Making myself as small a target as I could I folded my arms against my chest and leaned forward until my helmet nearly touched the windshield.

When the hail started smashing the back windows out of the cars around me and breaking windshields I knew that basically, I was screwed…but it was too late to do anything about it. These were hammer blows. I’ve never been so glad to be wearing a helmet…

The windshield saved my chest and arms, for the most part anyway, and the helmet deflected most stuff so I only took a few impacts on the shoulders. Even so, I took some serious hits, some hitting the helmet so hard it rocked my head back. My ears were ringing from the noise of those hits.

My legs and shoulders took some blows too. I kept having to clear the hail out of my lap/off the tank.

The big stuff mostly glanced off my back due to the angles, but I still took some hits that knocked the breath out of me and I have some serious welts/bruises there. The wife thinks I was saved by the hair…(yeah, I’m not losing any hair on my head, it just migrates down my back). I think she might be teasing me.

This morning I can hardly walk…feels like I lost a fight. I guess, generally speaking, I did. Thank heavens for Ibuprofen. I have a bruise/raised contusion on my outer left calf that has to be 6 inches long and two or three wide. The tops of my feet are bruised. That’s the worst of it this morning. Like I said…lucked out.

I frequently chase storms, sometimes they chase me. This one simply pounced out of the blue. I guess that answers the “who was the hunter or hunted today” question.

The Valk seems to have fared reasonably well. There are several hail dents in the front fender, and a couple in the tank. I can’t tell if the pipes and valve covers are dented…they have “clean spots” where the hail hit, but I’ll have to clean them before I can see for sure.

The layer of ablative flesh armor (that would be me) mostly protected the tank, but there are a couple smallish dents in it.

I’ve been in a worse storm…but at least I had my leather jacket that time. Still took damage…much more to the Valk and I needed stitches after that one.

People can die in these storms…had I not had the helmet any of the hits to the head could have been deadly…and there was absolutely nowhere to go. Perhaps I should have left my meager shelter and tried to get in somebody’s car with them…I’d like to think somebody would have let me…(I can see the headlines now, “Fat guy tries to carjack mini-van during hailstorm.”)

I’ll probably write this up more in a story form once I decide how I feel about it.

Oh, and insult to injury…I took a hard hit on my left jeans pocket, which contained my mp3 player. Not only do I have an mp3 player-shaped bruise on my leg, but the darn player went into “repeat mode”, playing the same song over and over in perfect time with the hailstones. “Lightning” by REO Speedwagon is now burned into my brain.

The pics aren’t mine. I was too busy “not dying” to take any… 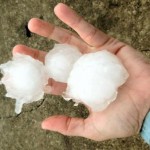 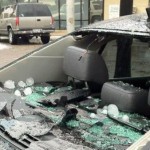 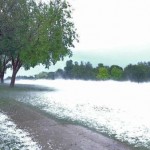 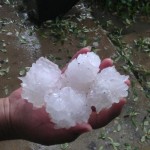 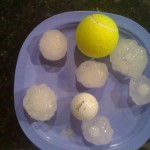 There is a LOT of property damage in Dallas area today…it seriously looks like a war zone in some areas. I’ve got coworkers that have seriously damaged cars and houses…I am really surprised that (so far anyway) nobody is reporting any serious injuries.

One Response to Oh Hail