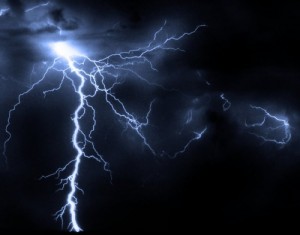 The heart of a storm is like no other place. To enter it on a motorcycle is nothing short of self discovery.

There is a “life in your own hands, very edge of your skill” challenge element to it that will force you to grow and learn, and it will make you understand what it is to be alive.

There’s also a “lightning and hail and cold rain and flying water and thunderous violence and completely overwhelmed sensory overload” element that will make you understand what it is to die.

And you discover, with no possibility of self delusion or mistake, exactly what you are made of there. -Daniel Meyer

The hiss of the tires over the drenched pavement almost masks the quiet grumble of the the big cruiser. Deeper runoff and small puddles vary the sound enough that it often resembles static, and I find myself intently listening in vain for any message to be gleaned from it.

Everything is accompanied by a deep and powerful bass note as thunder rolls across the landscape. The rumbling can be felt clear to my soul and serves only to raise dark memories and intense emotions.

I thought I’d forgotten how to fear.

Deep night, but almost continuous lightning reveals my surroundings in maddeningly short flashes and stark but incomplete detail. Between those, it’s blacker than black out here. In my limited view the road is the only sign that humans have ever existed, and I’m the only one on it.

My soul aches for a friendly voice or touch.

The lone-wolf…alone. And he’s limping.

This is not a friendly place.

Warm gusts mixed with cold, blustery downdrafts rock the bike. I’m right on the edge…in that zone. A stationary swirling low pressure bubble means the storms are forming up directly over and in front of me, then rapidly moving south and east. As I’m headed mostly north and east I’ve been skirting the northern curve of the same system for hours.

The clean but threatening smell of the storm awakens something deeply primal in me and penetrates to the core. Mist and small drops of water collect on the hairs of my arms and stronger gusts occasionally shake them loose. The resulting sensation sends shivers through my torso.

Seldom in the actual rain, but passing so close behind it that the runoff is still intense…small stones and sand washing in rivulets across the road. The tires make a distinctive “snap” as we cut through these at close to 80mph.

Heavy drops spatter on the windshield to remind me just how close I am…and the occasional hailstone I spy bouncing down the road plainly says I can be taken by the heart of the storm anytime it desires. Powerful winds batter me from a fresh outflow every few minutes and challenge my mastery of the road and my control of the machine. It’s the storm’s way of snarling at me.

I occasionally howl back.

Two billion in damage…that’s the estimate of what this storm’s big brother did to Dallas just two days past. Caught out in it, pounced on by a severe hailstorm, trapped on the highway with shutdown traffic and absolutely nowhere to run, I still bear the injuries and the feeling of inevitability that storm created.

Several times in my life I’ve been reduced to a point where all I could hope for was to simply survive. Each time I only realized that I’d reached that point after it was far too late to do anything about it.

Each time dredges up the others. The memories. The emotions. The pain.

Still battered and bruised, tonight, I’m not at all sure I’m up for the fight.

The storm growls again and I feel it deep down.

Fight or flight. I want to charge it…or run. Steadfastly I do neither. I focus on the road and plow my way ever forward. I am determined I will chart my own course. I am neither hunter nor prey tonight. I can almost believe that.

The cold runoff and scattered hailstones raise a ghostly mist that partially obscures the road and lends a haunting air to the landscape. The lightning is not helping, creating brightly lit, stark, black and white snapshots of the world I move through. Multiple shadows from ordinary objects create the illusion of movement. Other things are plainly revealed…things that should not be…cannot be…but inexplicably are. There is no second look. The flickering show has moved on.

In the strange flickering light the road twists and rises, seemingly independent of the landscape around it…a writhing, living thing. Tilting, thrashing, it becomes Ouroboros, the world snake, struggling to throw me off its slippery back. Optical illusions abound. Turns where there are none. Straight where I must turn. Decoys for the unwary.

I struggle to keep the big machine on track. A splash through some deeper runoff and I feel the slight shimmy of my rear wheel at the very edge of hydroplaning. A sign I should ease off. I ignore it.

Shadows leap for the road and I have mere fractions of a heartbeat to decide between illusion and reality. There are other places…other worlds…on the far side of those shadows. They are hostile to my kind…not a place I want to be, but that’s where I’ll go if I make a mistake here. This is not a “feeling”, it’s something I know. Traps for the body. Snares for the soul.

The penalties are extreme…for those that dare to ride the storms.

The continuous powerful strobe of the lightning and pitch black of the shadows overwhelms my peripheral vision. Dragons charge me, monsters roar, roads appear and then vanish, things move. A gateway to hell beckons, even as angels march to war. Ghosts of my past rise from the mists.

My demons hunt me here, and here is where they are strongest.

Very real, tangible danger combines with illusion and emotion…blending indelibly to the point where I have trouble telling them apart. It doesn’t really matter I suppose. At 80 mph an illusion can wipe you off the face of the earth just a surely as a lightning bolt.

I snarl my defiance and continue on.

The tension builds to the critical point. The injuries from the previous storm, and the concentration needed simply to keep my track in this one sap the last of my strength. Most serious storms are of short duration…their very power consuming the forces that summon them, or their usual fast movement allowing me to pass through quickly…but this one…we’ve been flirting for hours. It seems a lifetime and I understand more than most…if I make even a single small mistake, a lifetime it damn well may turn out to be.

Tree branches in the road. Big ones. The scene nearly fooled me. The strobe-photo view tricked my perception. Branches *in* the road morphed into a view of trees *beside* the road. A hard-right turn that wasn’t there. It was only a feeling that stopped me. I dodge the limbs and manage to stay on the pavement.

I’ve only another 40 miles to go when the storm seems to give up flirting and instead, seeks to deal out punishment. Freezing downdrafts bring sleet to pelt already painfully bruised knuckles. Even more slippery conditions struggle to wrest the big cruiser from my control. Backflow winds gust strong enough to raise water off the road and douse my legs. The thunder redoubles in intensity. The lightning reveals a funnel cloud in the distance.

Swirling clouds. Landscape. Roads and trees. All revealed in a series of hundreds of black and white flash images. I have a sudden shift of perception.

This is Nature’s art show. Despite the punishment…despite the pain…it lifts my spirit to see it. Beauty and unthinkable power mixed in a presentation the gods…or the demons…have put on just for me.

It infuriates them that I realize this and the rain comes crashing down. The world is obliterated and I nearly despair.

Turns out the price for admittance to this show is quite steep.

Me, my machine, and the road. Completely alone again.

I shudder under this new assault. There is little left inside of me to give.

Spent and exhausted, I arrive in the lights of town none to soon.

The noise from the storm masks my arrival and entry into the house, and minutes drift by before the wife knows I’m home.

She finds me sitting on the warm wood floor, cross-legged and shirtless, alone in the middle of the living room. I’ve thrown the windows and doors wide and the curtains billow as the cool breezes of the renewing storm chase the heat of the day from the grand old Victorian house. Steam rises from my soaked frame.

Even through the windows lightning renders most everything in black and white. She is the only color in the room…a dreamy warmth in the otherwise stark detail. Reality in an alien land. An anchor to pull me firmly back to this world.

I look up as the lightning flashes and we catch each others eyes. I hold her gaze as the thunder fades into the distance.

“You okay?” she asks gently.

A deep breath. The power of the storm soaking into my soul. I suddenly realize that it is mine.

Still holding her gaze I wink a blue eye at her. I know at this moment she couldn’t look away if she wished.

Another lightning strike followed by a sharp crack of thunder lights the room and shakes the windows. Close, that one.

I break our gaze with the next flash. That’s not a power I want over another.

Quietly she says, “You seem subdued.”

I don’t reply for a moment. The storm outside begins to fade. The storm in my soul reignites.