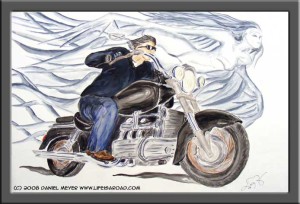 It’s just pressure…a subtle push on the right handlebar…almost a thought really, but it yields decidedly unsubtle results as I throw the Valkyrie into a hard right turn. Tires squalling, I pilot the big machine between two cars and across three lanes of the highway.

I push her hard. Right to the edge of our ability. It speaks of a lifetime of lessons…some painful…that I know exactly where that is.

Passing the rumble strips and shoulder transition gives us a little bounce as I push, harder this time, on the left handlebar, flipping us into a hard left and scattering gravel just in time to miss the guardrail. It’s close, but I’ve no attention to spare for that. My eyes are fixed ahead and left…on the place I WANT to be…as I adjust the trajectory of the turn and avoid the car behind me by twisting the throttle to its stop.

The suspension works flawlessly. The powerplant seems to bend space and time to my will. The machine howls in ecstasy. I can’t reliably claim that I didn’t howl right along with it. At this moment, the line between us…where the man leaves off and the machine begins, is impossibly hard to find.

And that’s as it should be. As it must be. Our fates are indelibly intertwined. Right now…in this moment…skill, design, performance, and perception will decide whether we survive, or perish in a tumbling mass of smashed man and shattered machine.

Just ahead an errant cage changes lanes and hits another, getting sideways and crossing several lanes of traffic. Scattering debris and smoke it glances off the unyielding Jersey barrier as sparks fly and the front bumper and fender sail off. Having lost little speed, the car bounces off and begins its journey back across the river of cars.

Despite the critical nature of piloting a steel cage at 80-mph surrounded by others of unknown skill trying to do the same, most drivers are distracted or inattentive enough that they are mostly unaware of what’s happening ahead. Anything out of the ordinary can be catastrophic.

This is out of the ordinary, but there are precious few brake lights. It will be sheer luck if the sliding, damaged car makes it across without another impact. Unfortunately I’m right in the danger zone.

The next few seconds are important. Others, suddenly aware of the immediate danger, are starting to react. Some are reacting badly…blindly swerving and standing on the brakes. Space closes in around me as my awareness seems to expand outward. I can feel the space and taste the capabilities of the machine I am astride. If we all do everything exactly right, perhaps we’ll all make it home today.

It’s over in the blink of an eye. The Dragon and I rocket past the damaged car and into the free space it had just come from just as it is hit again by the car behind me. Not much to spare. Not a sure thing. There might have been another way for me to live…another vector, but if so I never saw it.

One option. One possibility. One path. I’m seldom reduced to so few. Some would say I’m lucky to have had that one. Lucky to have made it through.

But I have a secret…Luck, you see, is a fickle, vindictive, impossibly bitchy mistress. If you trust only to Luck she’ll bed you soundly, and then smile sweetly at you even as she feeds you to the wolves.

Yeah. Luck can be a bitch. But she’s mine.

Skills. Anybody can ride a straight line down the highway. You’d damn well be able to do a Rhodonea too. Teleportation might come in handy too!

Preparation also means choosing and maintaining a machine that is up to the challenge and suits the rider perfectly.

Preparation can take a lifetime. Usually does in fact…one way or another. Riding is not for the timid, and the lessons never stop coming.

The machine and the man. Engineering and art.

But there’s another element.

Neither the design of the machine or the art of the rider is enough by itself. Together they are more then either could hope to be apart. The machine enables the riders skills to be expressed. The rider enables the machine to perform its function.

The line there blurs too…there must have been art in the engineering, or the machine would not be able to respond to the engineering in the art of riding.

They are indelibly blended.

If done exactly right…with a little passion thrown in…together they can have soul.

And as in anything worth doing…that is the critical element.