I was sooo sick this weekend. Unusual for me. Saturday I was shifting between wishing the world would end, and actively getting up and ending the damn thing myself.

Alfred, in ‘The Dark Knight’ says, “Some men just want to watch the world burn.” Well, yeah. It’s a good thing I didn’t have a button marked, “Deep Fat Fry”.

Somewhat better Sunday, but didn’t do a damn thing. It’s a mark of my upbringing…or skewed work ethic that I feel guilty…when I’m NOT getting something done.

I *swear* I could hear the grass laughing at me…and in moments of real quiet, I could actually hear it growing!

Much better this morning…but still not motivated…slept okay but not fully rested. Sort of hanging on the couch…lackluster…half watching the news and trying to work up the gumption to head on in to work…and only occasionally looking for the “Deep Fat Fry” button.

Not one to ignore unexpected gifts from the universe, I was eating my banana when Geronimo, the big orange cat, comes around the corner carrying a full roll of paper towels. Bump bump draaag. Bump bump draaag. He’s got his teeth into it and sort of half dragging it between his front legs. He’s almost twice as long as the roll of towels and I reflect (not for the first time) that we seem to grow awfully big cats here.

Again, I’m still not motivated, so I just watch him with a bemused look as he awkwardly makes his way across the room and then leaps onto the couch with it. It takes him two tries…a full roll of paper towels is an difficult thing to hold when you need all four limbs for leaping…

Plop. On his side he lands, beside me on the couch, with the roll of paper towels. He pushes it towards me with all four feet, meows once (“Here ya go!”) and leaves me with the roll.

About this time Pierre shows up again, this time carrying a small bunch of grapes, maybe six or eight grapes on a small stem. He doesn’t give these to me, but rather, pops them off the bunch one at a time and eats them himself. Seems fair, yes? After all, he gave me the banana.

I’m pondering my sudden and somewhat strange impulse to Google “do cats eat grapes” (the answer is directly in front of me, yanno…actually in the real world) when he finishes, looks at me thoughtfully for a moment, jumps up on the couch, and drops the empty grape stem thingy right in my hand.

Shortly, the wife wanders in and asks me why I ate her grapes…I blink, look in a panic at the stem I’m still holding in my hand, and work out an apology (yeah, like she’d believe my explanation). I pop up, hand her the roll of paper towels with a flourish and a grin, and say “So sorry my lady. Accept these as a small token of my humble regrets.”

“Well,” she says with a look on her face that clearly indicates I’ve lost it, “there’s more grapes in the fridge if you want some.” She wanders out of the room, mumbling.

But she kept the paper towels.

So, I suppose I’m in trouble with the wife.

See, the universe is a weird place and sometimes it’s healthier for me to just grin, shrug, and go to work. 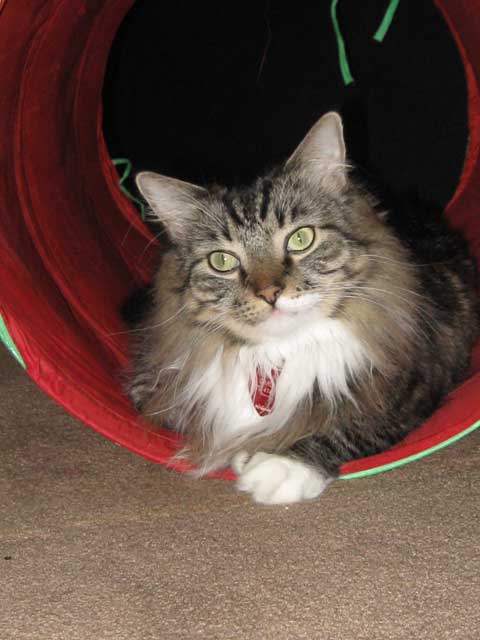 This entry was posted in Pets/Animals, Ramblings. Bookmark the permalink.

One Response to I’ve no idea…