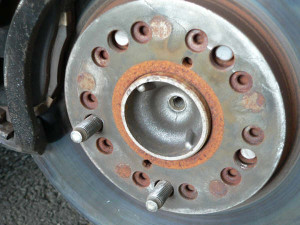 Sooo….had to go to Sam’s club for a quick stop this morning…when coming back out and getting on the Valk…while fiddling with gloves/etc…I notice the truck parked to the left of me…newer model Chevy…big tires, nice wheels…and 3 of 5 lugs broken off on the front right tire…

Yep, only two bolts holding on the quite large tire/wheel combo on the full-sized truck.

The guy was there loading a metric shit-ton of stuff in the back (a metric shit-ton is roughly equivalent to one “big-ass-load”) so I say, “Hey, dude! Three of your lugs are busted off here. You’re gonna lose your wheel!”

He says, and I quote, “Mind your own goddamn business.”

Ah. Yes. A young buck who’s balls haven’t dropped far enough out of his head so he could *think*.

If he’d had said, “Oh crap! I’ll get it home and fix it!” or something…*anything* along those lines…just a little sign of intelligence and/or respect…I’d have been just peachy…hell…if it had been THREE of the five it wouldn’t have really worried me…but TWO just ain’t gonna cut it. One hard turn and its done for.

But… “Mind your own damn business.” tells me he knows, and doesn’t care. Heck, I was just giving a friendly warning of a serious problem. Should have been the end of it. After delivering the warning, my intent was to light the engine on the big cruiser and hit the road. Now that wasn’t going to be enough.

See, picturing this wheel/tire bouncing across the highway at high-speed, followed shortly by an out of control and possibly tumbling full sized truck spewing whatever cargo is hanging out in the back all over the road…all the while trying to avoid the carnage on my motorcycle…makes me think…maybe…just maybe…this IS my business.

If I’d had a 4-way lug wrench handy I may have just tightened the remaining two…yanno…until they went “snap“…so he’d have to fix it before going anywhere without a tow-truck.

I *almost* settled for taking his valve-stem…yanno…pull*twist*pshhhhhhhhh…but he’d probably just change the tire and still leave it and I’d end up with a vandalism charge.

In my younger days I’d have beat him senseless for the blatant disrespect. But as I’ve gotten older I’ve learned the meaning of that old saying, “Never mess with an old guy…if we can’t beat you in a fair fight, we’ll just have to kill you.” and since I’m an old guy…and…disrespect and blatant stupidity isn’t *quite* a death sentence…yet (I was in a good mood) so I just took out my cell phone and snapped a few pics…the wheel, his truck, his cargo, his license plate, him…

Actually, in terms of full disclosure, I pretended to snap a few pics…I don’t use my phone for a camera normally and there’s no card in it…besides the wonderful “can’t read it in daylight” top-of-the-line technology makes it hard to get into camera mode when outside…yanno…in the actual daylight.

“What the fuck are you doin’?”

I didn’t even look up at him. “Taking pictures dipshit, what’s it look like?”

He didn’t quite know how to react to that. He’s apparently used to blustering his way through the world. Bluster doesn’t work on me.

“So when you splat somebody or yourself on the highway we’ll ALL know it was premeditated or negligence and your children’s children will be born into utter poverty after you settle all the lawsuits. Also that ‘State Farm’ sticker on your bumper reminds me that your insurance carrier might love this picture.”

I pointed the phone at his front tire and said, “Click.”

He suddenly turned contrite. Said he was going to fix it today. Showed me the parts.

Hopefully he actually will. I’ve got enough crap to dodge on the highway already.

They’re out there folks. Keep your eyes up and your skills frosty.