Accelerating HARD in a peg-dragging turn down the ramp from Woodall Rodgers (what the hell did HE do to people…to have this inhospitable, dank, canyon of a road named after him?), onto northbound US 75 Central Expressway, aiming “merge or die” style for a particular hole in traffic I felt the rear end squiggle just as I hit the wide-open stop on the throttle.

I briefly reflected that “drifting” a 1000 pounds of man and machine…a heavy cruiser…surrounded by high speed Dallas traffic and concrete barriers, was probably not a good thing to do.

But, yanno…I am what I am…and that was MY hole in the traffic and I was damn sure gonna take it!

I probably screamed something along the lines of, “More power Scotty!”

You’d best know what you’re about when you order up full power on a Valkyrie.

Zoom! Shoom! Snick! Right in the hole I go. Perfect.

But it is time. Tire’s gotta stick. The Dragon can’t do her job…which I demand that she does, ruthlessly and frequently, unless I do mine first.

Fresh meat for the rear is an order.

That was a Goodyear Assurance Triple Tread 205/60/16….It served well…they stick like glue and wear well and evenly…but replacements had gotten a bit expensive so I thought I’d try something else just to switch things up a bit. This one had about 26,000 miles on it…which is some sort of record for me as usually I tear ’em up by inserting random large sharp metal objects in them, usually at high speed on the highway. This tire had been severely stuck, and repaired successfully, twice.

This was the forth triple tread I’ve run.

And yes, I could have gotten some more miles out of it…perhaps a 1000 to 2000 or so…maybe even more if I nursed it…but it is on the bars or within the width of a penny to them all the way across. There is no longer sufficient siping or deep water channels for high performance storm riding…or even pushing it to the limits in the city. Besides, I’m headed for Inzane in just a couple weeks and that’ll be far more miles than is left on this skin.

Oh, and yeah, a minor point…”nursing it” just plain isn’t in my play list.

Seems like my tradition is to change tires the night before a major trip…but I’m trying to plan ahead just a smidgen this year! 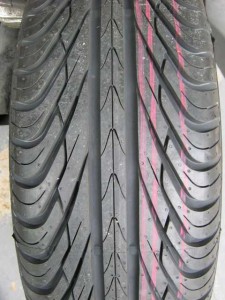 This is a General Altimax HP V-rated 205/60/16. Should do the job! Bought, shipped, mounted, taxed, titled, licensed, disposal fee-ed, and out the door for $118. Several other “hard riders” have reported good things about this tire…so, I’ll give it a go!

The 14th tire on the back of the Valk…full disclosure…the first 5 tires were motorcycle tires…over $1000 bucks worth…in less than 10,000 miles. The OEM Dunlop delaminated/shredded the tread before the first oil change…the rest were a combination of shitty tires/quality issues, random pointy-shreddy things, and other acts of violence. That summer we were having tire quality issues, heat issues, and construction zone issues…and I am rather hard on tires.

Want to know more about why I run “Darkside?”
My darkside article is here.