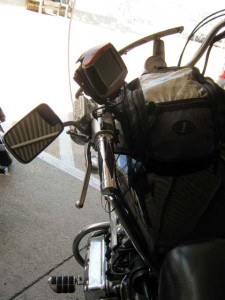 I can see where you’re going…but I don’t really know the way.

Slamming south out of Albert Lea, Minnesota, (apparently pronounced “Men-ah-sooo-dah” by the locals), I had pushed the “home” button on my GPS.

It’s not that I really needed navigation aids at the moment…that “cone of uncertainty” of what road I may feel like taking expands exponentially every mile I am from home. Since I was something around 900 miles from home at that moment, the roads available to my quirks of mood stretched from California to the Florida Keys.

Oh, I had some constraints…nearly $4/gal gasoline has been cramping my style for a couple years. Still, the road is my domain, and the route chosen this far from home is little better then a wild-ass-guess. As long as I have gasoline I treat the entire navigation thing as some sort of a whim.

But the “home” button…yep, I pushed it. Mainly because it did provide some interesting information about the miles on the direct route. Hmmm…895 miles. I could be there before midnight if I kept my stops short and followed the mains.

The heat was already building though…and it will burn you out just as surely as the hours will. Already beat due to a week away from home and here I am contemplating 15 hours hard running in the saddle. I wondered if I was up to it…

I shrugged and cranked the big machine up into the high end of the cruising speed range…that range that the LEO’s often frown about. The GPS only sort of accounts for that. Already the ETA it was predicting was dropping. It’s the warp drive on the heavy cruiser I guess.

I followed its lead for a while…each gas stop accompanied by the patient female voice saying, “Recalculating.” and then providing precise directions to return me to my route. It is a handy…and downright amazing piece of technology…especially appreciated by those of us that have been navigating these roads far longer than these sorts of things have been around.

But I do start to wonder…what if?

What if…life itself…becomes as mapped out and directed as this particular run seemed to be?

A simple glance…and I know where I’m going, where I turn next, what the roads are like, and the exact moment I’ll arrive at my destination.

A comfort for some…A sobering thought for me.

Somewhere south of Kansas City I turned off the highway for more fuel. That Valkyrie can be a thirsty beast…but then again, I didn’t buy this monster so that I could be particularly subdued.

As soon as I left the freeway, helpful directions, complete with arrows displayed on the screen popped up to let me know how to get back on my route.

But there was an interesting road there, you see, and for no reason other than a simple feeling that I should, I turned down it instead of returning to my predicted/directed route.

Shortly, the female voice interrupted my music with her normal, “Recalculating.” I wasn’t sure if it was my imagination or not, but she seemed a bit flustered.

I blew by the turn she asked for. “Recalculating.” I was sure of it this time. She was miffed.

Still, it could be my imagination.

What happened next was not though.

She required a turn. I ignored it. She said, “Recalculating.” and then popped an error on the screen.

“I cannot calculate a route to your final destination.”

The voice then read the message. She sounded dejected. The unit then popped out of “route” mode, displayed the map with no directions, and resumed playing my tunes.

You may not know this but you are everything you’ve ever needed.
Heaven with a touch of New York. Silver with a touch of gold.
And I can see where you’re goin’, but I don’t really know the way.
It’s got too many changes, too much rearranging,
Too many ways to go astray.
So if you wanna go, let me go along
I’d never walk that road alone
I heard it was hard
I heard it was long
But we’ll come back alive
‘Cause only the strong survive *

Out of every song loaded…some 700+ tunes…pretty much every song off every album I’ve ever heard that tickled my interest over nearly 50 years of listening to music…and she chooses THAT one to play at this moment.

Me? I just grinned, twisted the throttle to its stop, and mumbled, “I win.”

“I cannot calculate a route to your final destination.”