Was in the mood to ride Saturday…been itchin’ for a good run for a while now. Commuting can provide that “they’re all trying to fricken kill me” adrenaline rush, but sometimes hours burning up the highways is needed to get the soul back on track.

That’s the problem with a wanderer’s soul…sometimes you’ve got to run hard just to keep a hand on it.

I hit the hay to get some sleep Friday night…but then of course…work had to call. Early morning and I couldn’t get back to sleep…so to hell with it. Embrace what you can… 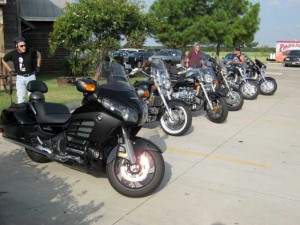 Breakfast in Cross Roads…5 Valks and an F6C.

Still had a bit before breakfast so I took the long way ’round…swinging up through Oklahoma. Yeah, coffee in Ardmore sounded good.

West to I35, south to Denton, east to Cross Roads…ham and cheese omelette, hash browns, and a handful of cheese-stuffed jalapenos, that were wrapped in chicken…and THEN wrapped in bacon and roasted…mmmmm.

After breakfast I shot south though Dallas and decided to jump east…because…well…I suppose…it was there. My initial thought was “Lunch in Louisiana”…yanno, alliteration and all that…but in my one and only nod to a schedule, determined that if I did that I would be late for dinner in Friendswood…and let me tell ya…dinners in Friendswood are simply not a thing to be late to. Not only would I miss some fine fellowship, but the folks I have the privilege to know are like a hoard of locusts when there’s dinner about.

So a smoothie in Lufkin…and pie in Crockett, and I was ready for lunch. Yeah yeah…life’s short. Eat dessert first. Smoothies? Well, it was hot and there was apparently no Braums store to be found so I could have my traditional Lime-sherbet freeze. No Braums store. (shakes head) Some parts of Texas just plain aren’t civilized. 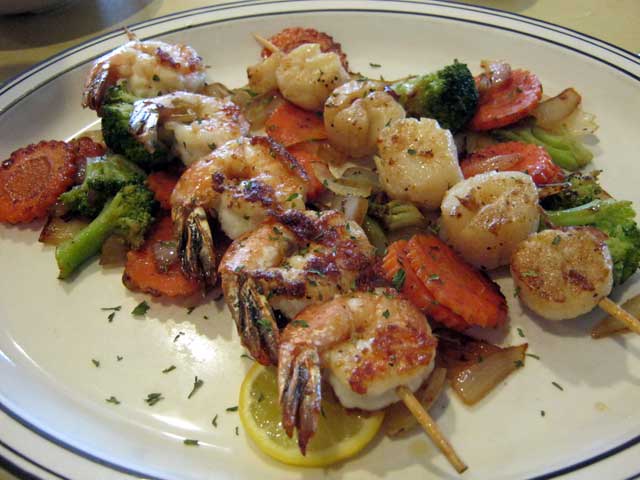 Lunch in Huntsville (Country Inn Steak and Seafood). Shrimp and scallops and a gallon of iced tea.

I ordered seafood. Shrimp and scallops. Perfectly grilled, with grilled vegetables, a small salad, and about a gallon (ten glasses or so) of very good iced-tea.

The salad was nice, the vegetables good, the scallops were real and they and the shrimp perfectly grilled. Just the ticket.

Next was the attack on Houston…a necessary evil if I was to get to Friendswood in time for dinner. There’s just no good way around this place. My technique…high-speed freeway running, heavy acceleration, hard braking, and a lot of screaming, “Is that all you’ve got!!?” Occasionally I’ve been known to add variations of the ‘word’, “fricken” to different places in that sentence.

It’s worked for me so far…I didn’t actually mean to pass the motorcycle cop going 90+…but that’s what traffic was doing and he made up for it anyway by passing me 5 minutes later…going 100+…and waggling his finger at me. I just waved and vowed to slow down when he did.

Dinner…well…good friends…a bunch of folks I really feel privileged to know, socializing, something cool to drink, and a bit to sit on something that wasn’t screaming through traffic. What else could I need?

Ah, well, some food I suppose…and a heck of a spread. There was meat, sides, and meat…and meat. And some meat.

They say a picture’s worth a thousand words? Okay then, a picture of meat: 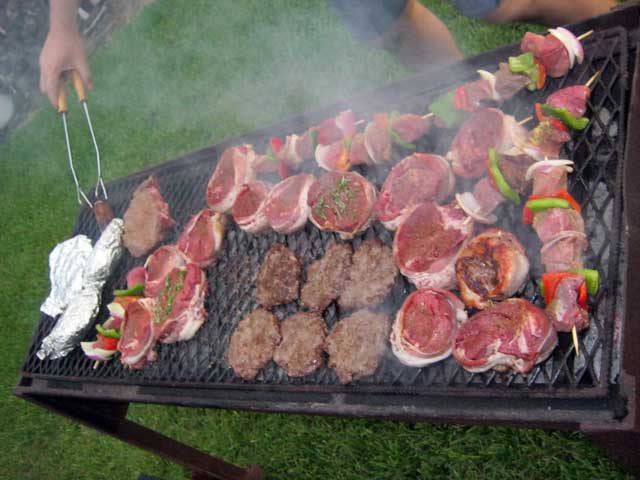 Second batch on the grill. Mmmmmm.

Close to a 300-mile run home…very fine night run straight up I45. Tailwind makes it smooth. Temps dropped out of the triple digits. Ahhh.

Not uneventful of course. There are stories and more than a little magic to be found in the Texas summer night.

Stories, yeah, I found ’em. Those are for later.

The map…if it shows up…more or less covers the ride Saturday. Hmmm…mostly…I might have left out a side trip for a smoothie in Lufkin…or maybe it was Nacogdoches. Hey, it was friggen HOT out there Saturday.

Pretty damn near a 1000 miles…if I throw in that side trip to Lufkin…or Nacogdoches…all apparently, so I could get something to eat.

But there’s always more to it than that.

2 Responses to Because I can…