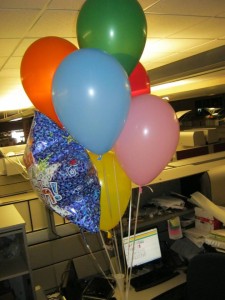 Yesterday was my birthday…and awesome coworkers were awesome. I got balloons…AND lunch. And chocolate! What else could ya need?

When I left to go home yesterday I took my balloons with me…mainly, I confess, because I’m evil and wanted to see if they would freak the dog or cats out.

I’m sure I smiled…a dangerous smile…picturing the carnage as Shorty the Corgi, Pierre the Polydactyl Maine Coon, and Geronimo the caffeinated cat all attempted to fly about the house to protect us from the evil orbs of flying death. The wife would no doubt join in the fray and if I waited till just the right moment to set the balloons free…like when she was in the shower…well…my day could just get better and better.

As I was headed to the parking lot I unexpectedly encountered a lady headed toward her car with her 4-5ish son by the hand.

He looked cranky. She looked worse. I didn’t really have a choice. That silly male brain again.

“OH YES!…ur please?” she was apparently having a “day”. I don’t doubt it. Chances are if you have your toddler on your work campus (or even visiting this place if she wasn’t an employee) your day probably hasn’t gone as predicted.

I pulled the blue one out of the bunch and handed it down to her. The kid was happy to have his new balloon as they headed for their car.

Later…after a hellish traffic commute, I stopped at the gas station to put about 2.3 million dollars worth of fuel in the truck, and found another mother…with another young kid…Mom was fueling the car and trying to keep the kid corralled. She (the kid) wasn’t happy.

I gave her the pink one. Yeah, okay, I’ve stuck with gender roles so far. It is no doubt, my unconscionable misogynist privileged male chauvinist upbringing…because, we all know…no little girl anywhere likes pink…DOES make ’em smile though.

At the grocery store I lost another one. Little blond headed girl with blue eyes the size of dinner plates saw them floating around in my truck before I’d even put it in park.

I told her Dad…”She’s gonna be a damn heart-breaker.”

“Yeah.” He grinned and nodded toward the store entrance, “You should see her mother.”

Shortly afterwards I lost the green one to her mother. Lucky fella…that guy. I counted my diminishing supply of balloons while watching the heart-breaker’s mother climb in their car with her balloon and mumbled, “And they think they have no power…”

The yellow one escaped when I opened the truck door to toss in the groceries. I swear it screamed Shakespeare at me as it flew away…something like, “It’s not in the stars to hold our destiny but in ourselves!”

Pro-tip: “Toss in” is not an appropriate way to load your groceries…especially when you’ve been tasked to “pick up eggs”. I think I can be excused though. Shakespearean balloons make me cranky.

I killed the orange one. With extreme prejudice. When I started the big truck the orange balloon stuck to my head with static and started in with more Shakespeare. “If you prick us do we not bleed? If you tickle us do we not laugh? If you…”

Nope. If I prick you, you explode. That’s…handy…actually. There’s some people I could test that on…

Yep, Shakespearean balloons make me cranky…but it was an accident. I swear.

I briefly reflected that perhaps…just perhaps…I’d had too much caffeine today.

Of course, then I came to my senses. “Too much” and “caffeine” are words I understand, but put together in a sentence they just don’t make any sense.

By the time I made it home I only had the foil/mylar balloon left.

According to plan I turned it loose. The results were anticlimactic at best.

The cats, as cats are want to do…ignored it completely.

Shorty the Corgi opened one eye, rolled over, went back to sleep, and farted. Gah. I’m amazed it didn’t set off the smoke alarm. We’ve really gotta try some different food for that dog.

As for me, well, my evening went just fine despite the sacrifice of my balloons. They made me smile early in the day, and then, when I was done with them they made some other folks smile too.

That’s pretty good mileage for a handful of balloons.