Warning…saga ahead. Yeah. I’m a writer. We do this.

Normally…I maintain all my vehicles to the degree that I could jump in/on any one of them and take a spur-of-the-moment cross-country trip with no more preparation than grabbing a fist full of gas-money and a diet Coke.

Since we have several distinct machines…with different distinct purposes…it’s quite rare when there isn’t one handy for whatever task is required.

This weekend was quite rare. We couldn’t have left town on a trip if we’d wanted to.

Chaotic space intersects ours at the eighteenth dimensional gradient. Apparently we drove through a trimetric fracture. The temporal surge that damaged our equipment was caused by an explosion of a microscopic singularity passing through this solar system. Somehow, the energy emitted by the singularity shifted the chroniton particles in our vehicles into a high state of temporal polarization.

Or…well…that’s my best guess as to how we got into this situation.

The short of it is…every single vehicle we own (and that’s a few) was down at the same time. I guess it’s inevitable…when the YOUNGEST of your vehicles is 13 years old and the LEAST mileage is 150,000…that no matter how well you maintain things there will be a time when they all get together and cause problems at the same time.

Gonna have to break ’em of that habit.

Now…to be fair…most of ’em would have gotten us somewhere in an emergency situation…and I can almost always make something work well enough for a single task…even if that means a sacrificial play…but it’s still rare for so many to be disabled at once. 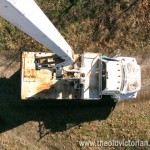 The “Left-handed Fargle-snorker” was the first one down.

Last weekend I went to move The Left-handed Fargle-snorker and it wouldn’t start. Fuel delivery. I expect it’s the fuel pump. Also could use a carburetor rebuild, and I didn’t need the truck at the moment so I ordered the parts with the idea that it’ll be a project one weekend in the near future. 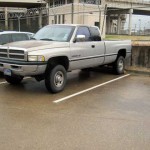 “Big Iron” was the second one to die.

It rained quite hard a couple days last week. Quite unusual for July in Texas but there it was. If I rode the Valk, and opened my mouth, I would have drowned so I took Big Iron to work. When I got home I discovered it had developed a significant oil leak on a valve cover gasket. Significant enough that it’s not driveable…fire would be a distinct possibility with all that oil raining down on the manifolds. It’s a difficult repair so I shelved it for another weekend since the climbing and bending into an engine compartment may be a bit beyond me at the moment…but that’s another story.

And that’s two down. 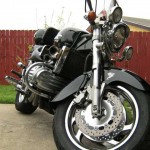 “The Dragon” was the third to fall.

The Dragon needed an oil change, and air filter, and as it turned out, after I got it apart I determined it required a petcock rebuild kit. Since I gave my last kit away at Inzane this year, I had to head to the dealer in a vain hope that they would have one. They didn’t of course…they carry FAR too many jackets and shirts and other logo-merchandise to bother with…yanno…keeping actual parts in stock. My parts are coming in Wednesday.

So that’s three down. 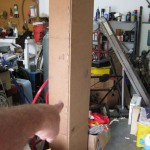 Parts for “Little Rivet”. The WRONG parts, but parts.

Little Rivet usually resides at The Old Vic, but its exhaust system was getting a little noisy so I had it here in town in order to replace it. I had ordered a system off the net last week and was planning on installing it this weekend. 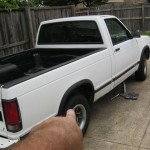 I had jumped in Little Rivet for the futile run to the motorcycle dealer and as I was returning…the rusted out muffler snapped off the intermediate pipe. 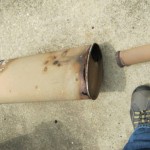 As a muffler, this is a pretty good brick.

I got it home of course…banged on the muffler…and the VERY holy exhaust system pretty much fell off. 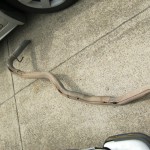 As an exhaust pipe, this is a pretty good colander.

No problem right? Drag out the giant box the UPS fairy dropped off last week and I’ll install the new one. Except…of course…they shipped the wrong one. Checked with the local places…parts on the way…they’ll be here Monday. Crap. 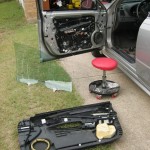 “Crunchbird” had to come a LOT further apart before I was done.

When I got back from trying to get parts for Little Rivet, Crunchbird (the wife’s ride), all we had left, decided to be petulant.

When I got out of it, the front windows rolled down.

This…of course…was, the “critical detector” going off…machines can tell when you need them, and it had decided that since we REALLY needed it this week, that it would be a brat.

So, yeah, for no apparent reason it started rolling the front windows down when we took the key out of the ignition. It was no longer possible to close the windows or lock this car, unless we left the key in it. I’ve never even heard of this…so I called Nissan. They hadn’t heard of it either, but laughed and said they’d be happy to dig around until they found it…at $175/hr…if I bring it in Monday.

And that’s five down.

The last one…no more transport machines for me. All dead.

Clearly, untenable. I pondered renting something…I wasn’t really feeling up to mechanical mayhem…bending and lifting at this very moment is problematic…but then the stubborn set in. THINGS were going to get fixed…or I was going to end them…and possibly the world, trying.

This turned out to be…a cracked key-cylinder position switch on the driver’s door lock…it took a BUNCH of hunting to figure that out…nice to be vindicated…I bypassed the switch and we are good to go again. Only thing that doesn’t work is you can’t lower both front windows by sticking the key in the door-lock, turning it right, and holding it for a few seconds…a superfluous feature…and one we’ve never used.

I changed the door handle while I was in there…the old one was cracked. We’d already broken/replaced the rear ones.

Next, I converted The Dragon’s petcock to a manual model. She’s good to go until I get the right part in, as long as I turn the gas off manually when I shut her down. No problem.

Not much else I could do without parts coming in…but I never leave well enough just well enough. That would be boring.

I decided to teach Crunchbird a lesson.

It fought back hard on not only diagnosing the problem, but taking things apart to get to it. I need it to realize that it either works with and for us…or it’s going to die a slow, extended “taken apart into its component pieces” death if it keeps being petulant. 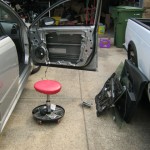 Took this one apart…because I can.

So today I took the other front door apart, just to drive home that fundamental lesson. See, with machinery…I always win…one way or another. I may NOT actually be able to fix (or get fixed) something…but I enjoy the process anyway…and the machine gets to die. I may pause for breath…but I don’t give up.

Other than the lesson, I actually had a reason…I changed the door handle. After finding the other front one cracked, I checked this one and yep…cracked. That’s now all 4 that have been changed. Weeee!

Crunchbird now knows without a doubt I’ll take it apart in a heatbeat…and make it especially painful if it doesn’t cooperate.

It cooperated today. The car is ready for whatever’s needed.

I’ll see you on the road…perhaps I’ll even be driving/riding something!