So…a while back the wife mentions in passing that her car (Crunchbird) died pulling out of a parking lot. It started again, but she said also that that took a moment of trying. The thing with the modern cars…fuel injection, computer controlled ignitions/etc…is they just *don’t* do that…unless something is wrong.

I took it out…no code on the computer…ran it hard…with AC, without. Fast, slow. Idled it a while…poked at stuff under the hood looking for anything obvious…ran it hard some more…and I couldn’t get it to miss a beat…other than the idle seemed a bit rough to me.

Now…she’s her own woman…and goes where and when she pleases…and so has and will again encounter some of the evil in this world…but if she does it WON’T be because the car I gave her left her stranded.

Believe me when I say I’d take the thing apart into its component pieces or replace it completely before I accept her driving something I *know* is ready to fail…so I persisted.

Eventually got it to pop a code and determined it was a crankshaft position sensor. Replaced that and took it through its paces. It seemed okay…

Until it did it again.

I replaced another sensor, gave the wife Little Rivet to drive and resolved to put Crunchbird through its paces.

I had a doc’s appointment and then had to head to work so I took her car. It started misbehaving before I reached my appointment.

Enough. I finished my appointment and took the car to Nissan. They have more sophisticated diagnostic tools and should be able to tell what’s up.

Fourteen years…180-something thousand miles…eventually SOME service will be needed, yes?

Nissan determined it had a couple more bad sensors (no big deal) but also had a bad pre-catalyst manifold and low fuel pressure. Looking at the readings and symptoms, I believed them. Both fixable…but a bit pricey. Parts alone were over $1400.

So yeah…the wife’s car is now fixed…I do believe it underestimated the depths of my resolve and determination on this matter. Note the subtle differences in the before/after pics… 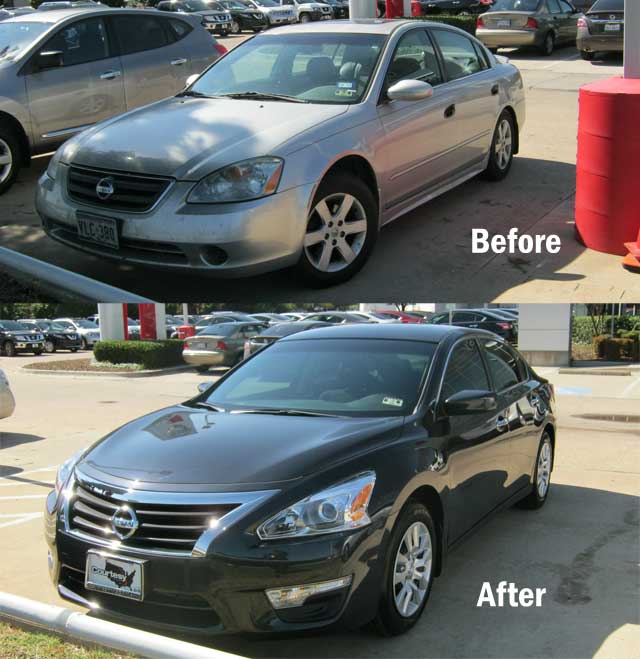 Short of it was…they cut me a VERY good deal…price, interest, trade.