Well that was unexpected… 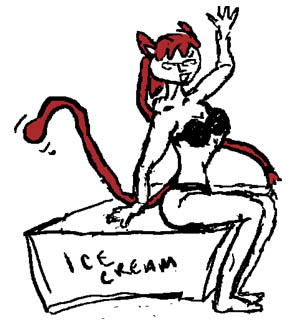 Leaving work this evening I ran into construction on one way out of downtown, an accident on another, and I don’t even know what was going on the third way I tried.

So…I created a 4th way…and ended up in the arts district…in traffic…again.

Just when I was certain the entire city should be written off, mumbling to myself, “I vote we take off and nuke the site from orbit…it’s the only way to be sure”…well…the unexpected occurred.

Random cat girl got on my bike with me.

That’s not a misprint.

And not just any random cat girl…one of the young, hormone carbonating big-tittied variety…in a blue thong bikini…(made of dental floss as best as I can tell)…

Fluffy, electrically articulated cat ears…big fluffy tail and all (the tail hiding far more than the bikini)…she jumped on the bike at an intersection, pressed her…ur…assets hard into my back, hugged me tight, gave me a big kiss (bite?) on the side of my neck, and said, “Let’s get out of here” or something like that…(carbonated hormones can seriously impact hearing).

Apparently I stiffened (hah! see what I did there?)

In one fluid movement she leaped off the bike saying “OHMYGODYOU’RENOTNASH” (or bash, stache, or whoever she had thought I was when she leaped ON the bike)…and blushed clean to her nipples. I would have thought any hormone carbonator that would go out in that getup would be beyond blushing, but…well…it was cute.

I stared.
Her ears twitched.
I grinned.
She smiled and waved sheepishly. “Well, bye!”

Her tail swished as she turned and fled.

The guy in the pickup next to me gave me a thumbs up.

I decided I should probably breathe again.

I had been having a pretty sucky day. This moment simply turned that around. With a smile on my face and a shake of my head I headed out of town.

Accosted by a random cat girl and it just absolutely made my day. Maybe my week! Yeah, I’m a guy. Get over it.

And maybe Dallas isn’t such a total loss after all….and I’ve a new favorite route out of town.

Now…if you’ll excuse me…I’ve got some things to “discuss” with my own hormone carbonator. (“C’mere wife!”)