A shift in the tide… 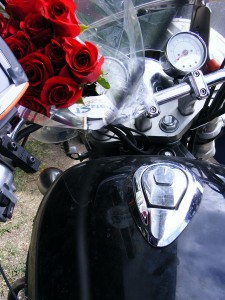 Some roses for my lady…

Some of my faithful readers may recall that due to a flaw in my cunning plan, I embarked on a quite successful impromptu rose delivery expedition a couple years back.

Today, I embarked on a similar errand.

Whipping the big cruiser through the city in a series of errands before heading to work…errands connected by high-speed zoomages…I found myself back in my neighborhood, in front of the grocery store, shoving gasoline down the gullet of the thirsty beast.

Since it was something like $1.85 a gallon I was disappointed when the pump clicked off at 4.4 gallons and she wouldn’t hold any more. Man. $1.85 a gallon! I was tempted to fill up my pockets!

Abandoning the “gasoline in the pockets” plan and eyeing the grocery store, I surmised that by applying a little extra-enthusiastic zoomage for the commute to work, I could squeeze just a few minutes out of my schedule to stop by the house and grab my wife on the butt…ur…give the wife a kiss.

Roses. Yep, been married right at 25 years now and I still buy her flowers. Surprise flowers even…the “just because” kind, not the “I really messed up” kind. I know, I know…supposed to be the old ball and chain and tired and bored and stuck in a routine all that…but nope.

My heart still skips a beat when she comes into a room. So…some roses for my lover are an order.

Also, she still lets me grab her on the butt…so I figure we’re doing okay.

The florist lady, evidently overloaded with roses and figuring I must have really pissed off my girl to be buying flowers on a weekday morning handed me another dozen on the way out of the store and said, “Good luck.”

So…flowers acquired. Extras even! Quick trip through the neighborhood accomplished with minimal screaming and no blood at all (and not even a single squirrel!)

Wife spotted. Roses delivered. Butt grabbed…ur…I mean kiss kissed…on the whole, the day has so far been a complete success.

Butt…ur…but then it took a darker turn.

I had this second bunch of roses ya see…an odd number it turns out (11), and wrapped only in plastic instead of a pretty wrapper…so I left them on the bike and decided to duplicate my previous expedition. (hint: If ya haven’t…ya probably should read the story at that link)

This time…it was a dismal failure. The atmosphere has changed. Fear, division, distractions…I don’t know…but what I do know…is in encountering nearly 30 pedestrians…I only managed to give away a single rose. I was refused, avoided, or fled from with varying degrees of urgency nearly every time.

Just one rose. She, at least, seemed pleased.

I hope it made a difference.

But…the tide has shifted. The atmosphere has changed. This does not make the city a better place. 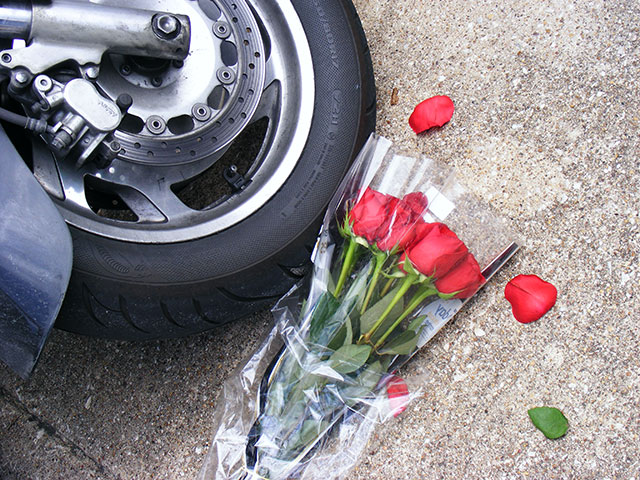 A story in the picture…

One Response to A shift in the tide…