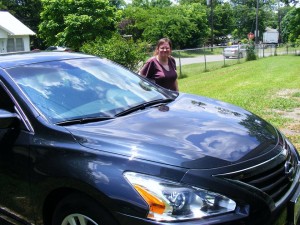 Cracked her view…(not in this pic though)

Last week the Wife called. Banging down the highway and got zinged by a rock/such that took out the windshield on Da’AltimaDaSequal (note to self…get her to name that thing!). Star/crack/etc (not in this pic). Crack went its own gleefully thorough road-trip across its rather limited landscape.

Windshield is toast. Gonna need a new one.

I think she thought I’d be upset…25 years and she ain’t figured it out yet. I don’t relish additional expenses, but really, could care less about the damage.

Thing did its job. Got her where she was going and unharmed. *That’s* what I care about.

Absolutely anything else I can fix…only variable is how big a mess I have to make.

In the case of car glass…the mess I have to make is accomplished by opening my wallet. Annoying but simple.

So…’Da Altima (the sequel), needs a windshield. I emailed my insurance guy to see if it was covered and what I needed to tell the glass shop.

Now, I’ve not needed glass on a covered vehicle in decades…but that sounded off to me. What happened to glass coverage?

Now…no worries either way…windshields are not terribly expensive, but I DO want to make sure I’m getting what I pay for out here…which is disturbingly difficult nowadays…

So, anyway, I gave the insurance guy a call to clarify.

“So, I *don’t* have glass coverage other than comprehensive?”

“Correct. If you have a repairable star or crack we’ll waive the deductible for that, but otherwise it’s covered under your comprehensive and $500 deductible.”

“Mmm. Okay. Didn’t there used to be glass coverage?”

“Yes, but this company stopped carrying that in Texas a few years back. It’s covered under comprehensive. You declined the third-party policy that could replace that coverage that has a $50 deductible.”

“Oh. Okay. How much is that coverage?”

“$100 a year! That’s fucking crazy! Windshields are usually only a couple hundred at most!”

“Yeah, I have a note in your file from when you declined it…you said, and I quote, ‘Y’all are fucking crazy, you know that right?’ ”

I almost had to hang up I was laughing so hard…that sounds exactly like me, and yep, would still decline it. That’s a terrible deal!

It also sounds like my “records” out and about in business and government land are finally starting to “get” me.

We’ll see you on the road!