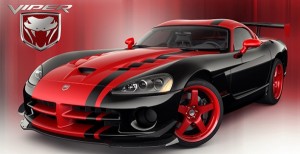 (Stock Photo…it looked a LOT like this one though)

I pulled the big cruiser up to the light…just to the right of a Dodge Viper. Gorgeous hunk of iron…or plastic…or whatever it is. Doesn’t really matter. Nice form. Art in motion. Art sitting still for that matter.

It had a definite muscle-car growl to the exhaust and a distinct, telling lope to the engine.

The passenger window went down and I looked inside to see the driver point at The Dragon and give me a thumbs up. I returned the salute.

I’ve always wondered if I could beat one of these things. The Valk is a powerful beast…but does have it’s limits. That V-10 in the Vipers…Ooooooo…

I’ve the cast-iron, non-turbo version of that thing in Big Iron…the big Dodge pickup…and the torque it puts out all through it’s rpm band is nothing short of awe-inspiring.

The sheer GO available in the Viper’s power-plant could possibly defy description. A significant portion of those beasties are also all-wheel drive…ensuring they can effectively connect that “umph” to the ground when needed.

Almost absently I blipped the throttle on the Valkyrie. The Viper pilot did the same. I looked his way and grinned. He returned my expression and then looked pointedly at the stop-light and the road ahead.

We could see the light for the opposing traffic go yellow…indicating an imminent green for us.

We both revved our engines a bit…anticipation quickening the blood.

It was ON…we both…

…looked both ways and then pulled gently away from the intersection in a safe and speed-limit behaving manner.

The little Toyota cockroach car in the right lane however…that had been paying more attention to our antics than to the road ahead, took off like a bat out of hell…or rather…like only a hybrid can…yanno…a sloth out of mud…or perhaps a slug out of slime…he even managed to “chirp” the tires. Not very environmental of him…

Dude was enthusiastic though. He must have lit both squirrels. He managed to hit at least 50 by the top of the hill…as the Richardson Police officer both I and the Viper driver had clearly seen parked in a business there there trolling for speeders in this obviously marked 40 mph zone flipped on his lights and took out after the hapless racer. Maybe he didn’t like the “Bush Sucks” sticker.

As for the Viper and the Valk? Maybe we’ll never know…or maybe we already do…yanno…if I were into that sort of thing when the cops were obviously otherwise occupied.