One of the cool things about owning a gen 2 Dodge Truck…I mean besides the 7000 pounds of steel, horsepower, and “not a shit given”…is that they made, literally millions of the things…many of the parts are common for the entire run from 1993-2001 (also includes the ’02 3/4 tons).

The other thing is that they tend to last…despite the plastic used anywhere on the things falling apart at random intervals for no apparent reason.

Millions of units…and folks tend to keep ’em…thus, the parts are readily available and since there’s a robust aftermarket, they are generally not terribly expensive.

Note that this does NOT apply to engine parts if you happen to run…like I do…the massive 8.0 liter V-10. Ah well. Prices to be paid and all that…

One of the things that fail on 20 year old cars/trucks nowadays are the plastic headlights. The tend to turn yellow, blocking as much as 30% of your headlight’s output.

Since, on the occasions I task “Big Iron” for something, it’s typically critical, intense, and many times, at night, I decided I needed to do something about my yellowed headlights.

Choices are to polish or replace. Places that “do” the polishing tend to charge about $30 per side. There are kits available for the consumer to do it for about $30 (for both lights). The reviews on the polishing are mixed…they have to remove the “yellow”…but often it’s more than just on the surface, and then, they have to coat the thing with a clear UV sealant. Lots of folks report only marginal improvement and 1 or 2 years of service before it’s needed again.

In my case the decision was made easier when I closely examined my lights. “Big Iron” has been through the wringer lately…enduring a severe hailstorm ($10,000 worth of dents in a $4000 truck) and many, many recent miles in “difficult” conditions. Turns out one light was clearly broken (on the blinker) and the other is cracked in several places. Well…hail. New ones it is.

The decision is also made MUCH easier by the aftermarket. Quality, new, replacement light assemblies for gen 2 Dodge trucks can be found “on the cheap”. I got a set (both sides) for under $70 including shipping and tax. I could not have gotten them polished for that.

The new parts ARE DOT approved and indistinguishable from OEM (there are other styles available, often cheaper construction and not DOT approved). The new assemblies also came with a new headlight bulb and the locking ring that holds it in…that’s a heck of a deal…

New vs Old. Note the break in the blinker. 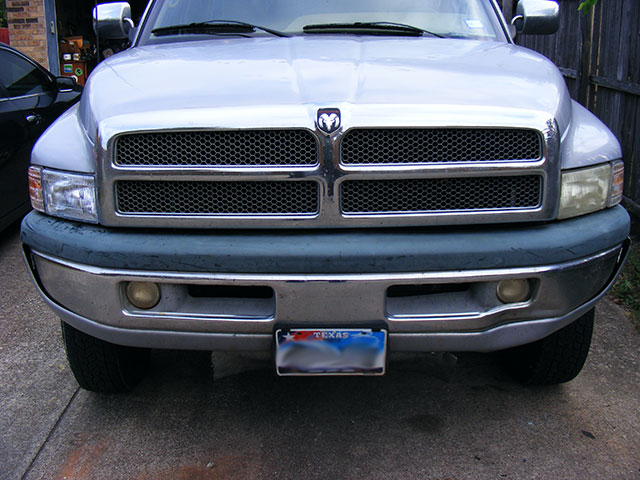 One down, one to go.

Y’all might note that I “buffed” the oxidation off my plastic bumper cover working on the new light (passenger’s side)…this is because, really, that plastic needs to be removed for enough space to remove/install these lights. Unfortunately it’s that famous Dodge plastic and can’t be removed and replaced again as all the clips that hold it on will break attempting to remove it.

So I left the bumper cover in place and…uh…finessed the light in there.

I may replace the bumper covers…that cheap aftermarket again. It’s a $30 part. For now though, I’ve got the light in. I’ll put the other in tomorrow. (I had about 15 minutes of daylight before I had to leave for work).

I’ll see you on the road…and now…even if it’s night time!