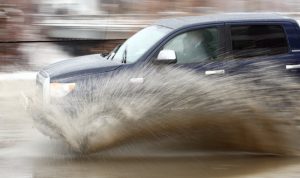 Big Iron…the 8000 pounds of 4×4, horsepower, and “gives no shits” is running smoothly. With any luck the heater would warm up somewhere in the next 10 miles. I’ve picked a “side-way” out of town as due to the weather the city’s core is starting to look like a full-on evacuation is underway.

Yeah, we’re southerners. Snow and ice are rare enough that it’s a great excuse to freak out about the weather.

Kind of like the yankee-folk do when their temperatures rise high enough to approach our spring normals.

To be fair…there *are* good reasons for this. We don’t often get a “gentle, beautiful” snowfall here. Predictions of a “dusting” often turn into 4 solid inches or more of ice…which is trouble in any major city. When the weather dude starts to say things like, “Uh oh…” it’s time to get out of downtown. The problem is…there’s usually about 8 million people that got the same message at the same time.

Me? No panic here. My sense of urgency was that my bosses said something along the lines of “Early release” and I was getting the heck out of Dodge…in the Dodge…before they changed their minds. Spend the afternoon cleaning up 10-year old code that was apparently written by a madman (yeah, that madman would be me), or spend the afternoon with my warm, willing woman just waiting for me at the house.

No choice at all really.

Anyway, departing town. Left lane of a one-way. Large median/sidewalks between the roads. Coming up on an intersection there is a…temptation.

There’s quite large puddle of icy water in my lane and up against the curb.

I *like* puddles. This is the kind of puddle that any rational guy sees and yells, “Puddle!” whilst accelerating toward it at high speed. I may have actually licked my lips in anticipation…

That’s what big honkin’ Dodges are *for*.

Yeah, I’m a guy. Doesn’t take much I suppose…

A group of pedestrians were standing at that curb waiting for the light, most of them staring at their phones and blissfully unaware of just what a day they’re gonna have when some car or truck comes roaring through that puddle.

I slowed till the next lane cleared and moved over to miss the puddle. Glancing at the group…one of them…I believe…was aware of what they’d been spared as he began to usher the others to the side a bit…there were, after-all, more to come behind me.

I can be a hard man. Ruthless even. Life has taught me how and severely punished me on multiple occasions when I’ve not taken the lesson. I bear lots of scars from those lessons…some of them are even on the outside.

Hard. Ruthless. Severe. I am all of those things…as needed.

But I am not a dick. There’s plenty of those running around already and the world is screwed up enough without more.

It’s a little thing…but that’s what the world is made up of…little things.