Took my woman out to the movies last night. Passengers, starring a sizzling Jennifer Lawrence and…the wife insists…an equally sizzling Chris Pratt, was on the agenda. 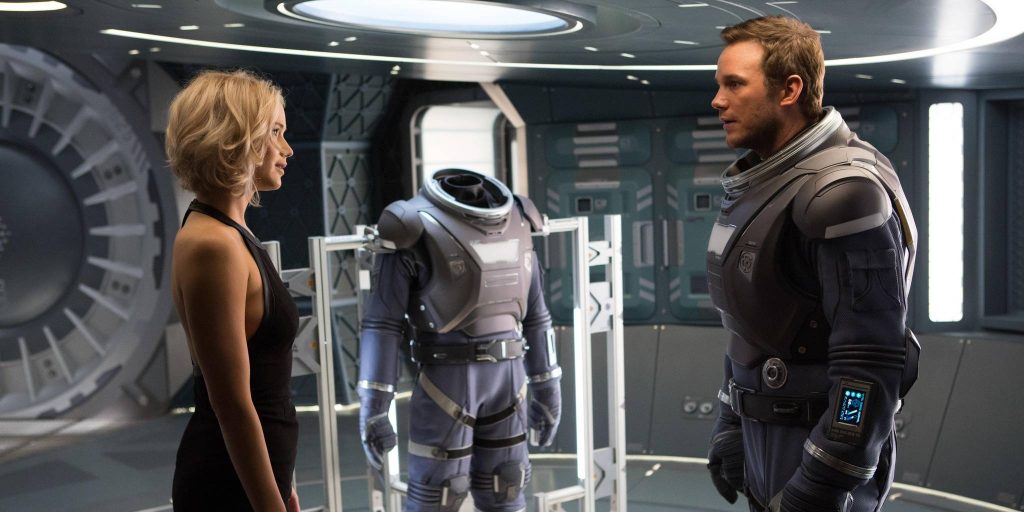 We enjoyed the film overall…a very clean hard scify that is stunningly gorgeous in sets (ALL the sets), design, and effects…and we will probably add it to the library.

…but it has it’s problems. They are almost irredeemable.

The story is that the Avalon…a corporate star-ship/cruise liner crossup, is transporting 5000 passengers and a couple hundred crew, all in suspended animation, from earth to a new colony. The journey is to take around 120 years.

With no way to get back into suspended animation, he is stranded alone, doomed to spend the rest of his life on what is essentially, a space-going luxury cruise ship.

I really wanted to like Chris Pratt’s character. His motivation for undertaking the journey and his skills I readily identify with.

But after a year alone (believably and occasionally humorously rendered) and going stir crazy he becomes obsessed with a female passenger (Aurora Lane, played by Jennifer Lawrence) and ultimately, causes her pod to malfunction and wake her up.

He does this knowing he’s dooming her to die before the ship reaches its destination. This to me is a boneheaded, sociopathic, and unforgivable move. I could not have done it…and it nearly turns the film from a scify action/disaster love story to a psychotic stalker movie.

Anyway, doomed to be together forever, and having obvious chemistry, over the next year they fall in love…of course…he’s not told her why she is awake…this naturally, does eventually come out with predictable results.

He is ultimately redeemed in that the malfunction that awoke him was much more serious than initially thought…and if she hadn’t been there to help in the resolution…the ship and everybody on it would have perished.

Laurence Fishburne makes a neat appearance later as a crew member woken up by another malfunctioning pod, and ultimately gives the couple the key (literally LOL!) to save the ship.

As I said, enjoyable if I could ignore Pratt’s character’s obvious shortcoming. I’d have much preferred Jennifer Lawrence’s character to awaken accidentally but I suppose that would have been too coincidental (beautiful, eligible, compatible female).

But that, added to the plot holes detracts from the experience.

1) As the increasingly serious error conditions on the ship become evident in the control room, the ship would have been programmed to awaken the crew…or some of the crew…to check on the situation.
2) No way to get back to sleep…I just couldn’t buy this…the crew would contain a doctor, and the doctor would be able to put folks in suspended animation and back into the pods. The crew had to have been done after takeoff (one would think), and would need to be awakened and put back to sleep in the event of any serious malfunction. We would expect those to happen possibly multiple times in a 120-year journey. Also…as automated and safe as the pods are supposed to be…waking passengers from 120 year hibernation unsupervised…the automated tech would have been there to put them back.

Additionally…one of the great scenes was a “slingshot around a sun” move…which any prudently designed vessel would have summoned some human supervision prior and during this time…*especially* with the cascading malfunctions.

The could have closed these plot holes easily enough…indicating the crew pods were unreachable as part of the initial malfunction or something, but I spotted no attempt to do this…

The action is fantastic, the effects amazing, and the chemistry between the characters works. The sets and rendering of the ship are downright inspiring.

Definitely worth a view on the big screen…but hurry…it’s nearing the end of the run. If you miss it in the theater pick up the DVD or catch it on Netflix.

My #1 pick for the year so far…but keep in mind…it’s only the second one I’ve seen this year!

There’s some good movie offerings coming up this year…so we’ll see you at the movies!