A movie/meal? We like movies. We have a couple dinner theaters hereabouts…sounds like a plan…
But what movie?

Me: “Well, Drafthouse has this ‘Titanic’ thing…showing the 1997 movie and serving a ‘themed’ multi course dinner…but it’s like…$90 each.”
Her: “Too expensive. We can watch it on DVD and eat steak or something.”

Me: “SMG has ‘The Notebook’ out for Valentines.” (I’d not seen this but heard it was supposed to be a “chick flick”.)
Her: “Gawd no. That’s not romantic. It’s a horrible tragedy!”

But the original was fun…which, frankly, is why we go to the movies. Reality and/or boring on the big screen doesn’t interest us all that much.

John Wick Chapter 2 is more of the same…a continuation, in fact…of the first movie…which would be sort of expected with such an inventive title.

Update…the ever helpful internet…being known for just this sort of thing…has informed me the body count for JW2 is 128. That’s all kills by John Wick.

Which…of course…is damn near double the 77 kills in the first movie…but the internet informs me (again, it’s good for this sort of useless information that nobody cares if is accurate) that his shot accuracy declined from a 86% in the first movie to 80%…which should surprise nobody since he would be very tired…HOW tired I’m not actually sure…as it appears the internet has failed me in determining how many times John Wick himself got shot (or stabbed or punched or tossed) in the movies.

Bullets flying. Bad guys dying. Our hero takes a licking and keeps on ticking…hmmm…actually, this is misleading…there is ZERO sex in these films, which is a shortcoming…when ya have this much gratuitous violence, gunshots, explosions, crashes, and the like…ya need some gratuitous sex to go along with it…it’s like a tradition!

And yes, we quite enjoyed it.

So…yep…the wife and I…at John Wick 2 for our romantic Valentines Evening…and we had a blast.

I do believe she’s a keeper. 🙂 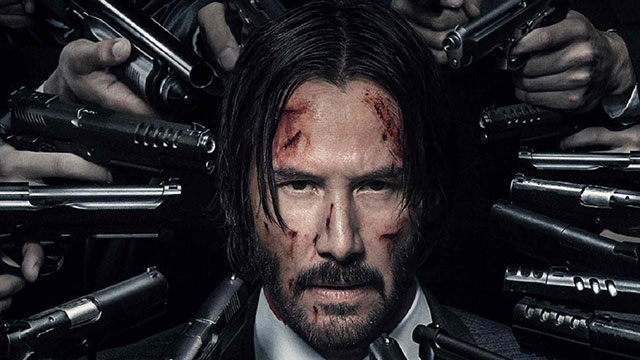