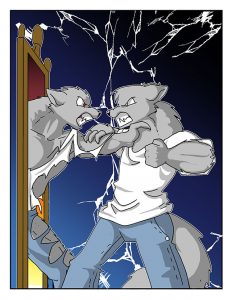 It starts as *that trip*…that most of us middle aged males are intimately familiar with…taken just after waking deep in the night to that somehow surprising but rather fundamental realization that there is only so long a man can go without taking a piss. It’s a trip that this night…sends me down a rabbit hole.

Padding silently across the carpet, eyes well adjusted to the night, I catch a glimpse of motion and turn to face it. A most dangerous thing stands there facing me. THE most dangerous thing in fact. The only thing I’ve faced that has the power to ultimately destroy me and everything I’ve worked for. And it can do it so easily that it’s frightening to ponder.

What I face is me, reflected in the full-length mirror. Starkly and harshly revealed by the shadows of the night.

And I’m in a mood. I learned long ago my particular demons hunt me in the night…they are strongest there. Usually it’s not enough. I shrug them off and do what I do.

He’s also not the man I was just a few months ago. This is probably a good thing…I’ve lost 60 pounds this year…160 since my peak…but again, tonight I’m not so sure. The effort this transformation takes is beyond description…it is…by far…the single hardest thing I’ve ever attempted…and I’ve been through some shit. I wonder if it’s worth it…if it will make any difference…if, in the long run, it matters to anyone at all…even to the man in the mirror.

The man in the mirror glares and gives no answer. The state of my mood is such that I can’t tell if that reflection of myself…has no answers or is just refusing to give them up.

I realize shortly that answers wouldn’t be enough. Hell. I don’t even have all the questions.

At that…the reflection may have shown a trace of a sardonic grin…but he still simply continued to stare.

I stare back and wonder just who the hell he is.

Questions…they are ugly leading things…in the deep of the night.

The career, which once accomplished important things, has shifted it’s purpose. What I do no longer seems to help the world. It doesn’t…really…seem to do anything. Work. Intricate, complex things…with little purpose. Just making a living. That I suppose, is a kind of a purpose…and describes much of the world…but it was never enough for me.

The art. The projects. The writing. All get pushed to the bottom of the list to make room for…what? The job? Did it help? Was it worth the cost?

And the body…hell! I got old. And fat. Just when did that happen? Nothing but muscle and blood in high-school…but, along the way, bit by bit, through injuries, overwork, and ignoring my basic needs I sold my health to the jobs. I let them demand pieces of my soul. And I gave them up for more…pay? Seniority? Accomplishment? I went to sleep as it were…banking on “someday” to make it right. To pay off. Someday never came…and standing here…I wonder if it’s too late.

At that thought mortality comes crashing down. Harshly revealed in the reflection.

The scars. The burns. The loose skin. Damage. Age. Pain. So much can’t be fixed. Too late. Far, far too late.

They tell you that you can’t remember pain…”they”…are full of shit. Time flashes back. Injuries are experienced again. Failures are relived. Fire and blood. Suffocation. Pain floods back…along with the helplessness…and the deep analysis of every failure…every mistake…EVERY shortcoming…that has brought me to this point.

These are the moments you learn what you are made of.

Thing is…I learned what I’m made of long ago. Forged in the Texas heat…tested by the very things that gave me all of those scars. I AM the man I am because of the path that brought me here. “What if” I had done this or that is a pointless exercise in wishful thinking and unproductive self pity.

I see motion in the mirror…behind the specter staring back…and that cute little short gal that for some reason shares her life with me appears behind me. Wraps her arms around me. It startles me to realize she couldn’t have reached around me mere months ago. She squeezes and stays silent, somehow knowing I’m working through a crises.

No…I’m not where…or who…I expected to be…but I’m me, nevertheless. I simply don’t know how to be anything else. I’ve also fought that man in the mirror before…and I know his secrets and his weaknesses even as he knows mine…

So I stare. And I grin. And he grins back. No…I don’t recognize the man in the mirror. I’m not even sure who he is or who he will become. But rather than despair, this realization breeds anticipation. Excitement.

No, I don’t know who he is…but it’s time I went and found out.

That cute little short gal…who somehow seems to know a turning point has been reached…and at least basically what passed between me and the man in the mirror…stretches up to her very tip-toes and presses her body into my back, raising goosebumps all down my bare spine, and whispers roughly in my ear, “Don’t ya know? Chicks dig scars. Come to bed with me.”

Life. Love. Lust. All intertwined in everything I do. As I turn away I catch a last glimpse of the man in the mirror. He’s smiling too.

Perhaps I know him better than I think.

I’ll see you on the road.
CUAgain,
Daniel Meyer

One Response to Those Moments…