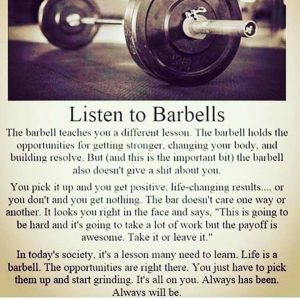 I set a PR (Personal Record) in the dead-lift last week. This is not particularly remarkable, as I’m coming from a place that was pretty low, and building strength rapidly.

Translation: I’m at a stage where I’ll probably set a new PR fairly often for a while, because, yanno, I’ve got nowhere to go but UP. We’ll see.

But that’s not what this post is about. Mostly. Kind-of.

There was a lesson in that deadlift. A couple actually…one I’ve talked about already and will again (the head-game thing), and another related to aging and strength…and persistence. Of course, it’s not all that simple. They are tied together as well.

First off: The lift. Heaviest I’ve done (hence the PR part yanno?). I’d already done several sets of 5 lifts of the monster (monster for ME anyway) and had rested a couple minutes and was setting up for the last set of 5.

I got the form right…got ready…took a breath…and lifted…momentarily anyway. Mere fractions of a second actually. I pretty much instantly shut down…no pain or such…but my brain telling me (that head-game again) that this WASN’T happening.

My trainer was observing and saw this. I’m curious what it looked like…the difference between the head-game and a physical limitation or strain, but whatever he saw…he knew.

That reinforced the already forming “WTF just happened?” in my head and I immediately hit it again. And just like that, yeah, another set of five.

“Know thyself” is kind of a “thing” to this introspective writer…so later, I was pondering this shutdown and the subsequent successful lift immediately after. As in everything, there are lessons…often unexpected ones…to be learned here.

I realized that part of the reason my brain said that lift wasn’t happening was simply because it wasn’t…at least…at that particular instant.

I expect there’s some complex term or physiological explanation (or equally possible, I could be full of baloney) but I experienced something enlightening in that moment.

As a younger man, the strength I’m used to deploying, when near capacity, pretty much instantly came “on”. In a lifting situation or such, applying the strength, the peak was RIGHT THEN…on application, and faded somewhat immediately afterwards. In other words, peak strength was immediate. If I couldn’t do it then, I wouldn’t even a fraction of a second later.

This is not true today.

I expect it’s age and physiology, but it could be experience, but what I’ve learned now is that it takes a moment after ordering up “Full power Scotty!” for it to come “on”. “Ramp up” is probably a better term, and “moment” is too strong a word for the delay. Mere fractions of a second…but long enough for the brain to say, “Eh?” and shut you down, should you let it.

Get the form right, start the lift. If it doesn’t move, don’t stop. Ignore the “shutdown” command the brain is ordering up. Keep applying…and suddenly, almost instantly, there it was.

Part head-game, part age? Experience? Life’s lessons in persistence? Whacking my brain with a tuna-fish? I dunno…but it works.

I LIKE learning new things. Especially when those new things are sweeping away my limitations.

Anyway, while I know this kind of introspection is probably boring to many, I’m finding these lessons apply to other things in life, not just fitness.

Not just fitness. But it seems it shows up a lot here.

I’m long used to being the fattest guy in the room. I’m not anymore, but the strange thing is that is still…what I see in the mirror. But to those I’ve not seen in a while the differences are apparently dramatic.

I get asked what I’m doing to achieve this on a lot of occasions.

“Work my ass off.” is the most simply accurate answer…and the one nobody likes. It’s also WAY NOT that simple, but it’s a conversation starter.

But for many, when we talk specifics, the head-game kicks in. It’s telling…that just like in my dead lift, the head-game is limiting those folks even BEFORE any serious effort has been applied.

“Well this morning I was doing….” (insert whatever hard work here).
“I can’t do that.”
“I also did…” (this other thing).
“Oh yeah, my schedule…” (blah blah blah)
“And this helps…” (some sort of cardio)
“But I get dizzy if I breath hard on Fridays when there’s a full moon…” (or whatever).
“And training is important and can help ya overcom…”
“I can’t.” (time, money, schedule, desire, werewolves, whatnot)
“And you’ve GOT to modify your diet…”
“I won’t deprive myself. That’s just misery.” (no, it’s not…more on that later)

Make no mistake…there ARE physical limitations…but for the most part, they pale in comparison to the mental ones and can be overcome with ANY serious effort and the proper application of skill.

Get it out of your head.

Can’t deadlift twice your body weight? Heh…neither can I (yet). But with instruction you can lift something. Can’t run on a treadmill? Then friggen walk it. Schedule won’t allow it? Neither will mine. I’m doing it anyway.

Get the form right. Apply the strength and skill…and the WILL. Do the lift. If it doesn’t come right away, apply a little longer. It’ll happen.

And I ain’t just talking about weights.