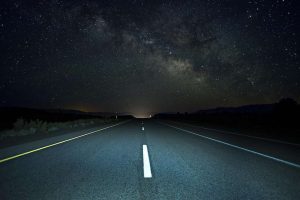 We’re running with the shadows of the night
So baby take my hand, it’ll be all right
Surrender all your dreams to me tonight
They’ll come true in the end…*

Moving rapidly through the deep Texas night, navigating the wife’s ride along roads I knew intimately long before I could legally drive, I should be at peace.

We were inbound for the city, but miles away from even the hint of influence of its lights. Stars and nebulae shine strongly enough to light up the night.

Almost. There is danger. The shadows of the night are fluid and merit attention.

Off the edge of the map. There be monsters here.

Hours to go, carving through the lonely landscape under a glorious empty sky.

My soul feels the distance and the desolation and its insignificance against such vastness and cries for company. For a touch.

It’s being a pesky thing…since I have both close by.

I allow myself a glance toward the passenger’s seat and as always, my heart skips a beat when I see her. That gal that shares her life with me dozes as we fly along. It’s a sight I could take in all night…a cool drink for a parched soul, but I only take that single, instant glance. Just a sip.

I’ve obligations you see. I do not take them lightly.

I’ve already dodged one deer along this road, and spied several more along the medians. The speed limits out here are high and the roads are narrow. The car is quick and nimble, but its security is an illusion. We’re tearing through the night surrounded by nothing but thin metal and plastic. It’s a balancing act. How fast? How safe? There is no fixed answer.

That lady dozing in the seat trusts that I’ll get us there. To me it’s not even us that I ponder. It’s her. I’d end the world to get her there safe, if that’s what it took. Without hesitation. Burn everybody and everything in it. I don’t say that lightly either.

I’ve met the monsters in the world. I bear the scars. Most aren’t on the outside…but they teach. There’s little left I still fear. Maybe nothing.

But her trust in me…and my ability to live up to it, are what I ponder now.

It’s a big damn world. Piloting a machine through the perilous night is the least of dangers to be found in it. It doesn’t help my mood that our destination is straight into the grasp of the malevolent, high-order predator known as Dallas. We live there…and are comfortable with it…but safe? Maybe…as long as we’re more dangerous than it is.

That’s an even bet. So far we’ve passed the tests. Beaten, bested, or at least escaped the monsters unscathed.

But do I fear?

No. Maybe. Perhaps I’ve forgotten how it tastes…but it’s probably what I feel when I worry that somehow, someday, someplace…my skills, precautions, perceptions, and reactions may not be enough to fulfill my purpose. A missed clue. A mistake. Even if I do everything right it’s still possible to fail. That’s the definition of being human.

My obligation. My purpose. I have my passions, hobbies, works, and needs, but I protect her and keep her safe. This above all else.

The fact that she’s perfectly capable of doing both for herself doesn’t mitigate my obligation one iota.

Shortly I steal another glance. She hasn’t moved but she’s watching me. Reading me. She’s extraordinarily adept at it.

“A man that has nothing to lose doesn’t know how to live.”

I chew on that thought for a moment and glance at her again. She’s asleep. Perhaps I imagined she spoke at all.

Doesn’t matter though. The message was delivered. Fear? No. That’s not it at all. With her by my side I just know how to live.

And I’ll best man, monster, or god that tries to take that from me.

Ponderings for a deep Texas night.