I suspect the guys all just nodded knowingly and the ladies are tilting their head with a pronounced WTF? look…

Oh, and don’t fret. This article isn’t about peeing. Mostly.

So, it’s like this…if there’s more than one open urinal, you pick one that’s NOT right next to another guy. Sort of a “dude code” thing. I’ve no idea how this came about, but it seems universal. I also expect to knowingly violate it results in small explosions, lightning bolts, and sword fights Note: I’ve not tested this theory. As a former electrician and frequent taunter of Thor, I’m immune to lightning…but sword fights not so much and the wife is tired of getting blood out of my clothes.

Anyway, there’s something similar to urinal etiquette in the gym. If you need a piece of equipment, and there’s more than one open, you take the one NOT right next to an occupied one. Note: That’s where the similarities end. Do NOT pee on the gym equipment. I’m not sure about the sword fights. 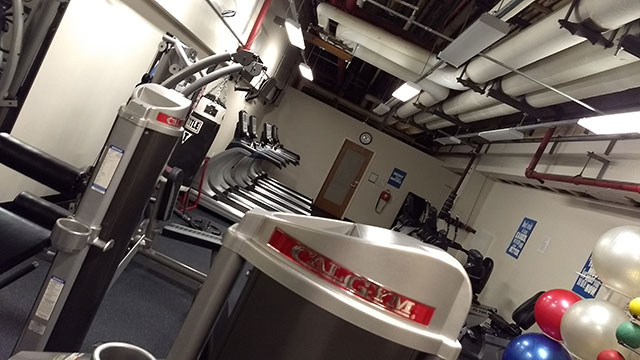 Oh…on to the point then…

So…a couple days back I hit the gym at 0-stupid-30 in the morning for a workout…and I elected to “warm up” with a half hour or so of high-incline treadmill. Yes…it IS uphill the entire way. I’m a masochist. Gawd help me I’m beginning to like this place.

Anyway, the treadmill I started on turned out to be broken and wouldn’t elevate. I shut it back down and stepped off it…and on to the next one…which happened to be next to an occupied one.

Without an obvious explosion, I’m not sure if “broken” implies I can break the occupation etiquette thing, but I had a workout to get to, and the guy didn’t seem to have a sword on him anyway.

I glanced at the gentleman on the treadmill next to me as I got mine started. He was looking my way so I nodded a greeting.

Note: Since I wasn’t recording or taking notes…some of the following is paraphrased I’m sure…

I’ll mention at this point that this dude was big…and covered in sweat, and walking quite slowly on the ‘mill. This is not normally things you note about others in the gym. Folks are at all different levels and capabilities…but all have the one important thing in common…they are THERE.

Him: “You were wondering how big I am. I’m 375 pounds.” This statement marked him as an obvious newbie to the gym world. I am a newbie myself, but already had the “fuck it, let’s go” attitude when I started and rapidly learned nobody really cared about my “level” or capabilities anyway.

Me: “No, I really wasn’t. You’re here. That gets you the respect of everybody in here. Do what you need to do. Nobody here will be critical of it. Ask for help if ya need it and otherwise just rock on.”

Him: “Really? Sorry. Just intimidated. All these fit folks. I’m not ever gonna be them.”

I’d hit the stop button on my “walk of death” machine. “You got here. You signed up for a membership, and you came. That’s the hardest part. Just keep doing that and you’ll make it.”

He just looked skeptical. This is the point it dawned on me (I’m still slow about this) that I wasn’t the fattest guy in the room. Still feels weird.

The rest of our conversation was after the workout…if you’re doing it right a normal conversation isn’t possible during a workout…just breathing becomes the focus. So…after the work…when normal breathing was once again possible and it seemed likely that we might just survive, we met for coffee at the cafe a couple doors down and resumed the conversation. It drifted around motivation and mechanics/techniques, and the rest about well…life.

…and the head game.

…and looking closer. Though there certainly are some, the gym isn’t full of “fit folks”. It’s full of people of all ages and abilities that have little in common except are all on their own journey and they bothered to show up and do the thing.

Just show up. Do the thing.

Huh. Seems like the secret to life, not just fitness.

Hallelujah. Can I be tax exempt? 🙂

Just show up. Do the thing.

ps: yes, I did plug my trainers…