Making the world a weirder place 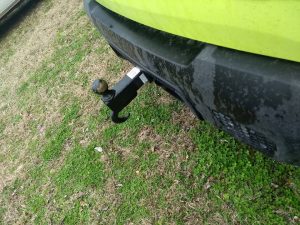 “What’s the hook do?” says the young boy of perhaps 8 years.

I *like* curious kids. First, simply because I readily identify with them…but more so because their curiosity will cause them no end of problems throughout childhood and teenage-hood…but if they make it through the mire with that one thing intact…they will go far in the world.

The kid looks at it for a moment…his face screwed up in concentration, then, “No…it would be on the top for that.”

I almost laughed. He’d managed to work out that nothing would stay in the hook with it on the bottom…but not that the hitch could be easily turned over.

I decided that he *liked* thinking and I would help him do a little more.

“Well, the cables I’m talking about are like on the aircraft carriers. Ever see ’em land a plane? That hook on the tail that stops ’em fast? That’s…” I indicated the hook, “So I can stop REALLY fast if I have to.”

His eyes were wide as he mouthed, “Ohhhh…coool!” and started away with his parents. I could tell he was still working out the implications of my statement so just stood and watched him departing.

He got it. It was visibly evident as he brought so much of his processing power on-line that his feet quit working quite right and he ground to a halt.

He turned laughing, “No it’s not!” Pretty certain he’d worked out that the logistics of TXDOT deploying stop cables at my command were at best, *improbable*.

He trotted over and looked closer. “You can turn that upside down.”

I smiled, “Yep!” as he trotted back to his parents.

I hope all those survive his future education.

…and why yes, yes I DO strive to be the magnificently weird uncle all kids should have.

This entry was posted in Blog, Humor, Ramblings. Bookmark the permalink.