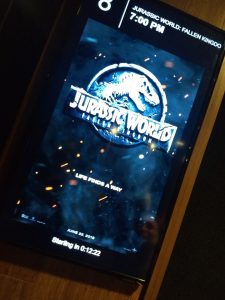 But of course we did!

Jurassic World was on the agenda.

A bit of a review…caution…some spoilers…
We LIKE the “stupid/improbable/over the top” action movie genre. We don’t get too hung up on the physics or science, though we appreciate when reality is at least given a passing nod…but we go to be entertained…and Jurassic World does that at least. Great action, great dinosaurs, cool sets.

So, those are the positives…we enjoyed it. It gave us much of what we needed for an entertaining evening. And…yanno….it was five dollar Tuesday!

We also enjoyed it in that…after what…5 movies?…we are finally where we actually should have been in the first movie (if you read the VERY good Michael Crichton book that spawned all this…) in that…the lesson of that book…was that it was already too late…not only does “life find a way” as Jeff Goldblum’s character states in the movie…but in the book…it was ALREADY too late…the dinosaurs were already off the island.

—COMPLETELY predictable…every act…every tense moment…every character…every “what’s next” was transparently predictable. This is NOT necessarily bad…sometimes entertainment is exactly that…you WANT the bad guy to “get his”. The only weakness in this case is they tried too hard to create suspense in many cases when all of us…every person in the theater, knew what was coming next.

We know what’s next…and the characters should too in most of these cases…so it would have played better as non-stop action, rather than trying to add the suspense.

—The motivation to get the two principle characters back to the island is simply not enough, given their experience in the prior movie. The answer would be “No fucking way.” The movie did nothing to convince them (or us) of a plausible/sufficient motivation to go. To top it off…leading into the “completely predictable” mode…the reason they WERE given…that they “bought into”…was an obvious bald-assed lie. Ah well. We HAD to get them to the island for the action, so…willing suspension of disbelief is helpful there.

Very like in the 1997 Lost World movie…if you’ll recall, Jeff Goldblum’s character was asked to go back, he said, “Fuck no!” basically…they said, “But your girlfriend’s there and we lost contact with her!” and he then said, “Okay.” and went in equipped with…a photographer and one trank gun with three darts. Nope. Ain’t buying it.

—Jeff Goldblum’s character…Malcolm…appears for a total of like…3 minutes…seated in a chair speaking to congress in a couple scenes…he was superfluous. Everything he added to the story was already taken care of in the dialog of the two principle characters….it seemed like he heard they were making a movie and called ’em up and said, “Ya gotta put me in! Just a couple minutes! I’m available! And I’m relevant! Really!” (if you didn’t read that in his voice…well go back and read it again!)

—They played Blue (the velociraptor) as “sympathetic”…we’re supposed to feel something for her at the end…NOPE. You just unleashed a raptor in a populated land where her natural prey will be humans…probably smaller ones…so…no. Shoot to kill.

—The game hunter’s death…stupid. He would not have lived as long as he had if he was that stupid…so…the moment that led to his demise was completely out of character for what we know of him…he should have had a more…competent…demise. 🙂 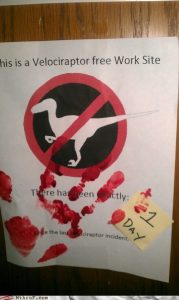 Anyway, if you like the franchise, GO…it’s worth it on the big screen. Enjoy it…and when ya get home…change out those “lever” door-knobs and window latches….oh…and maybe put up a sign at your workplace. I hear they help…

I’ll see you on the road…or perhaps at the movies!