I thought so too…

The guilt was running strong this morning apparently. That is to say…the massive fitness center had lots of folks. Unusual for the hours I usually attend.

A lot of ladies were part of the mix. That’s not terribly unusual…the mix is close to 50/50 at my normal “O-stupid-thirty”…but the sheer number of folks attending was 4 or 5 times usual for this hour.

I’m not sure what the occasion was. Last I’ve seen it this busy was the 1st two weeks after New Years resolutions.

Still plenty of room…but the atmosphere was different.

Several of the guys, and more than a few of the ladies were…for lack of a better term…”flirty”. Wandering around, meeting new faces, chatting, and all but dating. Some managing to flex, pump, or show off various assets, mysteriously without breaking a sweat.

I would guess half the folks on the floor today weren’t there for the workout. Unusual.

Most of the guys in this classification were advertising their affiliation with the various fire-fighting organizations in the area via tight logo t-shirts and a few embroidered ball caps. The ladies were all in immaculate and form fitting body-suits. “Perfect hair” seemed to be the defining characteristic of that part of the group.

Normally the people that make it in at O-Stupid-Thirty are “on a mission” and while many of us exchange greetings or passing nods, most get there, get to work, and get out. The ladies aren’t there to chat, and the men for the most part are courteous and focused enough to be the same way.

But a lot of those folks today were leaving out the “get to work” part.

Now…I “date” several times a week…but I have an advantage…my dates are with my wife of 28 years and there’s little awkwardness, posturings, preening, or misunderstandings required in the preliminary process.

So, yeah, pardon me if I’m a bit slow to recognize “flirting”…but even my oblivious brain started to wonder after the cute young thing followed me from the cardio theater (she took the treadmill next to mine despite the 20 other vacant ones about), through a quick machine circuit (working the rehab on the shoulder), and then all the way across the 100,000 square feet to the squat racks.

Sure, I can be a bit slow…but give me a break…at this unholy hour NOBODY flirts…hell…I’ve ONLY had one cup of coffee, and most cute young things don’t flirt with the fattest guy in the room anyway. I’ve yet to come to terms with the fact that I may not be “that” guy anymore.

I still see the fat guy in the mirror…and yep, I DO still have a ways to go. Maybe I’m not THAT guy anymore…but I’m not that OTHER guy either…yanno…the ones that could send ship-to-ship visual signals just by flexing their pecs…yet. Hey, I have hopes…I DO know Morse code…

So yeah, she was chatty, and didn’t seem to want advice, and subtle hints (like mostly ignoring her, sticking in my headphones, and working hard, grunting, and sweating) were ignored. When she asked what I did for a living and seemed fascinated that should have been a clue…yes, my job is intricate, engaging, and complex…but fascinating? Heh. HELL to the Nope.

But I still didn’t quite recognize flirting. Maybe she was new to the fitness scene and nervous about it. Maybe (I thought in my darker broodings), cute young thing needed a father figure…or gawd help me…a grandfather figure.

But flirting? With me? No.

There was NO doubt however, after I finished my workout, hit the locker room to grab my bag, and then left the building headed for my ride.

“Little Rivet“…the ancient, rusty-white, grumbly, beat up, but faithfully decrepit S-10 was the mode of transport this morning…one of the Valks (Stitch) is down with fork seals, the other (The Dragon) was extremely low on gas (didn’t want to mess with that till I left for work), Da ‘Altima the Sequel is getting un-destructo-crunched at the body shop…and Gozer the radioactive green Jeep is the wife’s ride. 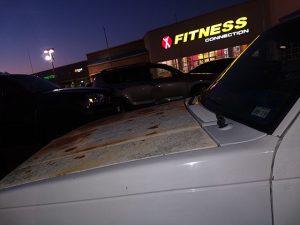 I had the headphones in and the tunes rocking so didn’t notice until I reached it, turned, and stuck the key in the door to unlock it.

Cute young thing stops with her hands on her hips, strikes a pose, and says, “Well shit. I thought you wuz something.” Then she turned on her heel and huffed off in a snit back to the building.

I stood there a good thirty seconds with my key stuck in the door of the decades old truck, grocking out what the heck had just happened.

Then I burst out laughing and said under my breath, (cute young thing was long-gone), “Well shit lady, I thought I wuz something too.”

Apparently Little Rivet didn’t meet with her approval. I wonder what would have happened if I’d been piloting something that did? Would she have leapt in with me? Just how would I explain THAT to the wife?

“Hey babe! Look what followed me home! I just found it in a parking lot?”

I headed for the house in a good mood…because despite whatever subtext is flying about a good workout and cute young things are a good start to the day.

But I was thanking whatever powers that be that I’m not in the modern dating world.

When the ride is the criteria…well…that’s a cute young thing that’s not going anywhere good. Life is SO much more than that.

One Response to I thought so too…