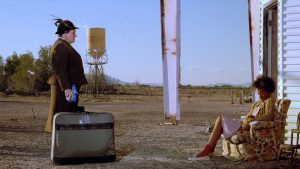 Have you seen Bagdad Cafe? The 1987 film stars an unknown Marianne Sägebrecht along with Jack Palance (and others) in what is ultimately a cute and heartwarming tale. It’s also known as Out of Rosenheim in the foreign market.

If y’all haven’t seen it, I do recommend it. It won quite a few awards and yet is vastly underrated.

But the movie is not, actually, what this post is about.

The start of it though…is.

The beginning of this film is one of the most poignantly sad things story-tellers could dream up. One dismisses it as a necessary piece of fiction required to set the rest of the story in motion.

It’s easy to dismiss. Surely it wasn’t reality. It simply couldn’t be.

Or so I used to believe. Then I saw it for myself.

Day before surgery. What I SHOULD be doing is hanging out at home, trying to mentally prepare myself for the physical ordeal I’m about to face…or at the least, trying to get a few things done while I actually have the use of my left arm.

What I’m actually doing is banging around east Texas, miles from home, dealing with somebody else’s problems. It’s a habit I’ve gotten into.

Errands ur…erranded, I’ve headed for the interstate to make some time towards home. With any luck, I can salvage a leisurely evening with my wife.

Approaching the I-state I already knew that plan was out. The westbound traffic was at a standstill. Hundreds of trucks, thousands of cars. Not a good thing when you’re 50 miles from the nearest normal traffic jam.

I hit the intersection anyway. A combo McDonald’s and Pilot Truck Stop stood there, and knowing east Texas and my likely detours around I-20 to get back to the metro-mess, I figured it was time to fuel the car, drain the bladder, and add some much needed caffeine to the mix.

As I crossed the bridge I noted my initial impression was correct. I-20 was a no-go. Cars and trucks on the westbound side. Dead stop. Horizon to horizon.

I hit the pumps, fueled the car, and pulled up to a parking space.

The lady exiting the McDonald’s caught my attention. Heavy-set. Chubby even. Middle aged, maybe a little older. Cheerful face. Big purse over her shoulder, and carrying a cardboard drink holder with two drinks and two ice-cream cones. She stepped out as I pulled in. She was looking around with a cheery smile on her face.

Her face registered momentary confusion as she looked around the lot carefully. Her smile dimmed but still there, she looked again, and then her face fell. A story was told in that instant. If a picture’s worth a thousand words, then this was ten thousand.

…and I read every damn one of them.

Hopes dashed. Deep down she was expecting it. But whether she had reason or not, she’d held some hope. Women are often like that. It is the best part of them. It’s the part that keeps the world sane. It’s often to their detriment though.

She knew what happened.

And in that moment, so did I. At least the important bits. My grip tightened on the wheel.

I asked it anyway. I didn’t have any choice. “Are you okay?”

The short of it is this: Her husband left her there. They were having problems and took a trip to work them out. He was going to drop her at her relatives in Dallas for a week while they pondered the details of the inevitable but so far amiable coming separation.

When they encountered the traffic jam, they eventually inched their way to the truck-stop for a much needed break. He suggested she go get some drinks and such while he finished gassing the car, and he’d meet her, basically, in the space I had just occupied. She’d added the ice-cream cones as a special treat, just to make the day better.

He left her there. Dumped her 90 miles from her destination, with the contents of her purse and nothing more. Twelve dollars cash and no credit cards. Not even a phone.

He had one. She knew the number. Scarcely believing what I’m sure she already knew, I called it. He had words for me. They were done. The westbound traffic was too much trouble. Eastbound was clear. He was going home. She could make her own way.

She saw it in my eyes as I hung up the phone. Read the disappointment I was feeling in humanity in general. The disbelief, depression, and cold anger that were crashing down on me even then.

Her tears streaming, she still smiled at me and touched my cheek. “It’s okay,” she tried to laugh, “you want an ice-cream? It’s melting…”

It’s a simple matter after that. I know my way around east Texas. Easy detour was US 80…some twenty-ish miles north of the I-state. I’m headed for Dallas. She has a destination there and she has an extra ice-cream.

It’s depressing though…that there’s a male out there that would do this. Male. Not man. Decades of marriage, and he dumps her at a fricken truck stop. I mean…he had to have loved her once…at least a little. Right?

Her last words to me as I dropped her at her relatives’ house, despite her situation, were for me. To help me. To make me feel better.

Guys, let me be clear…short term or long term. Relationship woes or not. Insurmountable problems or just drifting apart. You may need to be apart. You may be done. Finished. Kaput. It might be your fault. It might be hers. All that happens. Life is messy. People are complex.

But dumping her at a truck stop?

No. That gets really simple, really fast.

The circumstances don’t matter. A man…Owes. Her. Better.

…and keep the faith.