To “thing” or not to “thing”? That isn’t the question. 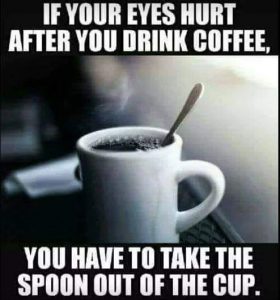 A tough morning today. Started out “off kilter”, so to speak, and I never quite got it back “on”…

It began with a fitful night’s sleep I suppose…weight of the world and all that…and very sore shoulders. PT’s been brutal recently as they prepare to kick me out. I’ve still got a long way to go but insurance will only allow so much of this stuff.

When the alarm went off I first knocked the durn phone off the table reaching for it…and then I swiped “snooze”…the first indicator of a swiftly tilting kilter. “Snooze” I seldom use.

At least…I *thought* I swiped snooze. Fifteen minutes later I startled awake and realized I’d missed that mark. Crap. I’d not even dragged my fuzzy white butt out of bed and I was already late.

Coffee was in order…that’s my preferred “pre-workout” drink. I like it, it perks me up (see what I did there?), and it leaves me in a fasted state for my workout, which I’ve found to be helpful in training away my “insulin resistance”. T2’s a bitch yanno? And I killed it. This irritates a surprising number of medical folks.

So, coffee? Yes…except I turned on the magic Kerig thing, poured the water in, added the unsustainable (really?) pod, and then promptly pushed the “power” button instead of the red flashing “brew” button. Pushing the “power” button when it’s already on is akin to breaking Harry Potter’s wand. If you do this the magic just won’t flow. Also Voldemort will rule the universe but that’s not a real concern for me before coffee.

I remained blissfully unaware of my incorrect sequencing.

I turned on the news and got dressed for the gym. Well, sort of. Somewhere in the middle of the dressing part I realized I was hearing no comforting “COFFEE IS BREWING” noises so I went to investigate. Mmmm…yeah. If I ruled the world I’d never have to MAKE coffee before I’d HAD coffee. I would set things up the night before to make the magic brew but that’s resulted in fireballs and screaming and blood before…twice…but that’s another story.

Played the “fake out the machine so it will brew” game (it doesn’t like being interrupted) and sat down to put on my shoes.

Ahhh. Coffee’s ready. Shoes are on. Coffee’s consumed (man that ammo goes fast!). I’m ready. I stepped out in the freezing driveway and promptly found “Nosejob”, daAltima, wouldn’t unlock. I had to push the little button on the door handle a surprisingly large number of times before I understood why. Seems ya gotta have the keyfob for that. Stupid cars. Won’t work without keys. Some sort of security feature I guess.

Went back in, grabbed the ‘fob, and then realized that I had no pockets to put it in.

“Mmmm. Weird.” thought I, “All my shorts have pockets.” It’s sort of a prerequisite for me. Without pockets where would I put all those lead wheel weights I seem to find in parking lots? I still don’t understand why I feel the compulsion to pick them up, but pockets are required for this function or I end up carrying them around all day in my hand.

That’s when I realized WHY I had no pockets.

Sigh. I was only wearing my underwear and a t-shirt. Now, men’s underwear does have A pocket, but it is inconveniently located for carrying lead weights. Slightly uncomfortable if anything not intended to be in that pocket ends up there anyway. Particularly for working out.

Ah well. It’s not likely the neighbors are out at 0-stupid-30…and they’ve seen it before anyway…more times than I can comfortably explain.

The neighbors are one thing…me at the gym sans shorts is another. Nobody deserves that.

Shoes off. Shorts on. Shoes on. Keyfob in pocket. “Nosejob” started, and I’m *FINALLY* on my way to the gym.

Except I have to detour. The road is closed. Half the lanes are closed for construction and it seems some truck driving dude missed the turn and got his back wheels stuck in the hole.

Good thing there’s not a lot of traffic. A quick u-turn, a couple different roads, and NOW I was on my way to the gym. I kept watching the horizon. I figured the way things had been going so far this morning, nuclear Armageddon might be up next.

But no. Clean trip to the gym. I turned off “Nosejob” and reached for my water bottle…only to realize it was sitting empty, on the counter, next to the magic bean juice machine.

“Who cares?” the casual reader may say, “you can make a workout without the water…they have drinking fountains anyway!”

Yep. But the magic keytag required to let me in the club is hanging from the ring on the side of the bottle…where it always is. In 18 months of “doing the thing”, I’ve never forgotten it (hence, why the keytag is attached to it).

So…after a choice curse word or two…back to the house. Water bottle acquired. Back to the club.

Workout worked out. Late, but done. I had to rush after that. Quick shower. Smack the wife on the butt. Hand her a couple lead wheel weights I was carrying around for some reason. Brave the Dallas traffic to go do the stuff that pays for all these shenanigans.

The point of all this?

A year ago any single one of these obstructions would have given me every reason, excuse, or justification to skip the workout.

And while this came up deep in the dark recesses of my brain, today it never got any serious consideration.

To “thing” or not to “thing”? was never the question. “How big a mess am I gonna have to make to go DO the thing?” was.

…and that makes all the difference.

I’ll see you on the road…or perhaps at the gym.