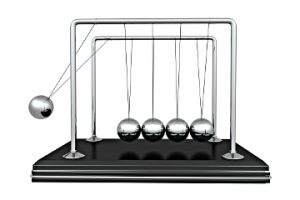 Newton’s Third Law states, “For every action, there is an equal and opposite reaction.”

I’ve actually heard people use this to justify…or excuse…their actions or behavior in human interactions.

Come to think of it, many folks use Newton’s First Law (link) much in the same way…that is…to justify their actions, or as often, lack of them.

Thing is, Newton’s Laws are physical principles and apply to motion. While this might be uber-critical if you should happen to be playing billiards, launching a rocket, or crashing your car…they are totally and completely irrelevant when applied to human interactions.

Actions and reactions in human behavior are a choice, no more and no less.

The world is ever so much of a better place when we recognize this.

Exiting the outward opening door of the stairwell of my parking garage this morning I encountered a tall, professionally dressed black lady just approaching and reaching for the door handle.

Already out/through, I stepped aside and held the door for her.

She stopped within the swing of the door, looked me in the eye, and said, “Piss off.” The fact that she stopped where she did, and didn’t move on, told me she was looking for a confrontation.

I’ll admit my heart dropped a little…most folks are reasonably polite in daily interactions and it hurts a bit when for no apparent reason, they direct their bile squarely at you.

There are lots of ways I could respond to this, many, no doubt, less than polite and completely justifiable given the context.

What I did was leave the polite smile plastered on my face, cock my head slightly, and raise an eyebrow at her.

She stood there for a half-a-breath and then said coldly, “I don’t like men much today.”

Ah. One of THOSE days.

Let me be clear, THIS is NOT on me. Her reaction, perception, preconceived notion, or what have you about my maleness, whiteness, tallness, shortness, leather-wearing-ness, door-holding-ness or whatever “ness” she could conjure up is straight on her.

I’ve no control or responsibility, even in today’s hyper-sensitive and victim-culture world, for how others choose to interpret my actions or presence.

What I DO have control and responsibility for…and what IS 100% on me, is how I react to this sort of thing. I couldn’t think of anything I knew would make the situation better, but I sure understood a LOT of ways to make it worse.

Every action has an equal and opposite reaction. Push back. Bounce away. Force for force. Bile for bile.

Yeah. No. Humans are NOT billiard balls.

Had she walked on, the encounter would have been over, leaving me in a slightly worse mood but otherwise with no harm done. With her standing where she was though, the encounter was far from over and for me to end it, I’d have to let the door go and walk on. It would either hit her or force her to move.

Neither impressed me as palatable options.

What I did, was leave the polite smile in place, continue to hold the door, and say calmly, “I’ve no need for you to like me.”

She looked me in the eye for a couple more heartbeats, said, “Huh.” and walked on.

I can’t tell you what her issue was. I can’t even say that I made the world a better place. What I know is that I didn’t make it a worse one…and sometimes that just has to do.