…and I felt his pain.

Imagine you are lying in bed…and I’m kneeling hard on your chest…and stuffing a pillow over your face with all my strength.

THAT…is pretty close to what an asthma attack feels like.

I’ve fought it all my life…I was born with it…and know something about it.

It’s life threatening and debilitating. It has nothing to do with weight…or lifestyle…or any of the other things people like to blame you for when you get sick.

It’s a disease. It requires treatment. Without it you’ll lose strength, and begin to cough…often so hard and long you end up throwing up…and you still can’t breathe.

If you’re lucky it passes…if you’re not, it will kill you. Without medicines the odds are not in your favor.

Here’s an important fact: As a percentage of sufferers, asthma has a higher mortality rate than breast cancer!

“What does not kill me makes me stronger”, yes? No. Not this time. Even if you survive…or have mild attacks…the symptoms of an attack are caused by inflammation of the lungs…which is causing long-term, cumulative damage. Untreated asthma will result in debilitating COPD later in life and will most likely be the cause of death.

This shouldn’t be an issue today. We have very safe and effective drugs to combat this…and if kept treated an asthma sufferer may never have another attack. 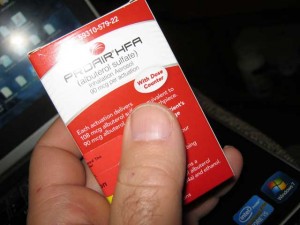 Albuterol Inhaler. Used to be cheap. Not so anymore.

Let’s start with treating the immediate symptoms. Albuterol is the go-to rescue inhaler. Safe, remarkably effective, NOT abusable, and portable…the problem? It used to be cheap. The feds fixed that.

See, it’s been around so long it was generic…and an inhaler (enough for a typical sufferer to last a month) cost about $4. Yep. Four dollars. There’s no reason any sufferer shouldn’t have one in his pocket, car, desk, and basically, scattered around the place.

Except the EPA made them change the propellant. Not for medical reasons…rather…because it was a CFC gas. So…a drug company reformulated it…and presto! New propellant! Marketed as “ProAire HFA” by Teva Respiratory. Also, and this is the important part…they now have exclusive right to produce and sell it for the next bunch of years (a generic may be available after 2023).

It’s also just for rescue…treatment of sudden onset of symptoms. Treating an attack still leaves behind the accumulating long-term damage.

There is a cheap version of albuterol…CAN be had for under 10 dollars…but it is NOT portable…it requires an expensive machine (nebulizer) to dispense and can’t really be done “on the fly” somewhere. (I find myself wondering if it would work in a “Vape” electronic cigarette) 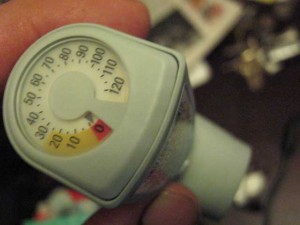 And then there’s the preventative treatments. In recent years some VERY safe and effective daily treatments have come out that can all but eliminate attacks. Symbicort and Advair are two of the most effective. They are reasonably new, and thus, again proprietary, and expensive.

Used daily, an asthma sufferer need rarely have any symptoms at all!

“BUT BUT…” sputters the mis-informed. “Insurance! Obamacare! On Dancer! On Prancer! On Comet! On Vixen!”

Let’s talk about that. MY insurance…which I’ve been paying for 30 years and rarely even met a deductible, quit covering Advair (my preventative), informing me that I should just use the Albuterol. See…if I DO that, it’s cheaper for them…and by the time I’m in the throes of COPD I’m older and retired, and NOT their problem (on medicare). Fortunately, they still will cover Symbicort…but NOT well…between deductibles and “co-insurance” I’m not even sure what else…I have to spend $4500 before they pay for much of anything.

As a user of preventatives, I’ve not had a serious asthma symptom in two years. I could probably have NO asthma symptoms…but since even with insurance I have trouble affording it…I use HALF the recommended dose just so I can.

Now…on to the working man.

So…no medicine for him…except when he manages to break out a few extra dollars. He can’t afford the “save my life now” rescue inhaler…what do you think the chances are he can afford to spring for the preventative?

So…he fights through…and tries to survive…just tries to make it through so he can make another day’s work…and possibly make things better for himself and his wife. He often loses a day’s pay though…when he has to be off sick for this.

This time I happened to be there…these attacks are dramatic…sudden, unannounced, and they will take you from robust and active to lying in bed struggling to breath (and NOT throw up) in minutes…I was there. I handed him my inhaler. I ‘forgot’ to get it back. Hopefully I won’t need it as I can’t refill my ‘scrip till next month.

It’s probably good for 20 days or so. (disclaimer: Unless the reader here happens to be an insurance slug or law enforcement type…then of course…I would never do anything like violating federal law by giving a dying man a lifesaving drug…I am making this entire thing up in a drunken stupor…or perhaps a dream…or a sleep-deprived hallucination…).

Of course, this doesn’t address preventatives…and reducing the cost of his future care…and what they’re gonna do NEXT month…but, well, I’m sure fining them even more next year and raising my rates some more will take care of it, yes?

This entry was posted in Lunacy. Bookmark the permalink.

One Response to Imagine…